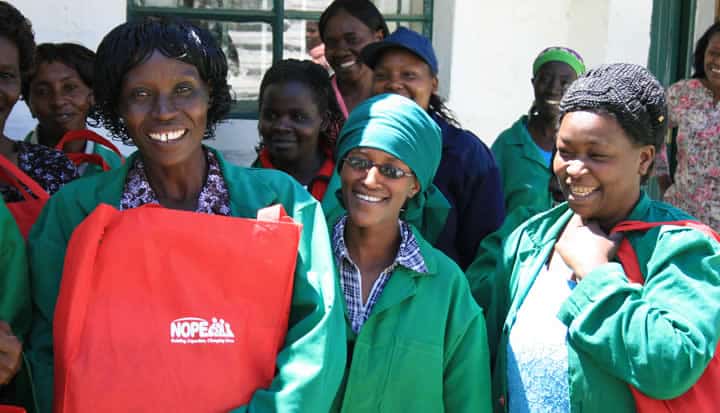 
While in Kenya this month, I sat in on a HERproject training on sexually transmitted infections (STIs) for future peer health educators. BSR’s HERproject uses a peer-to-peer training methodology to reach women working in factories and farms in Asia and Africa—to date, we’ve reached more than 200,000 women across eight countries.

The training was the first of a year-long women’s health program that we had just launched in a flower farm near the city of Nakuru.

As an uncharacteristic November storm raged outside the open doors of the training room, the women who would become health educators displayed confidence in answering the open questions that Maria, the trainer from our partner organization NOPE Kenya, posed. Maria introduced a scenario for discussion, the story of a woman who finds herself infected with an STI. “What should she do?,” Maria asked the group of women.

“Talk to her sexual partner.”

We had made little mention of HIV, but it was clear from their answers that everyone in the room had been exposed to HIV/AIDS prevention and treatment outreach.

The words that they used in their answers were right and enthusiastically given. But as we began to dig deeper, it became clear that the women had little clarity about what those words really meant in practice, let alone how to apply them to protecting themselves from contracting HIV or any other STI. Towards the end of the session, women were given condoms and told to open them. Not a single woman knew how to unroll a condom properly.

Our experience was telling: For as much money and effort as have been invested in HIV prevention and treatment in Kenya and throughout sub-Saharan Africa, you would hope for more than an empty vocabulary recital. Unfortunately, too many of these well-intentioned efforts base their interventions on an unrealistic expectation of the level of information required to drive behavior change. As UNAIDS points out in its recently released Global Report on AIDS, gaps in HIV awareness are still prevalent across the globe, and new educational approaches are needed.

The next day, we had a completely different experience, this time at a farm in Naivasha that has been participating in HERproject for seven months. The peer educators gleefully shared all the inaccurate information they used to believe. “I used to eat dirt for the nutrients,” one woman told me. “I used to believe that you could tell if someone had HIV by looking at them,” said another. “We used to think that only unmarried women and men would have sexually transmitted infections, but now we know that even married Christians can get them,” a third woman shared.

Later, these same women led a training for some of their colleagues on the farm. Their audience, filled with women and men, asked questions thoughtfully and without shame, and the women gave them answers with pride.

There is something to this; it’s important to apply time and care when asking people to alter their behavior. Above all, trainings about HIV/AIDS and other topics must empower people to change their own minds by providing the time, the patience, and the empathy to allow people to ask humble questions and to voice their confusion and fear.

HERproject certainly isn’t the only answer. But I was proud to watch the results of our training methodology and to realize that we are changing lives by empowering people to change their minds and make better health decisions for themselves and their families.

This blog was first published on the BSR Blog and is reproduced with permission.