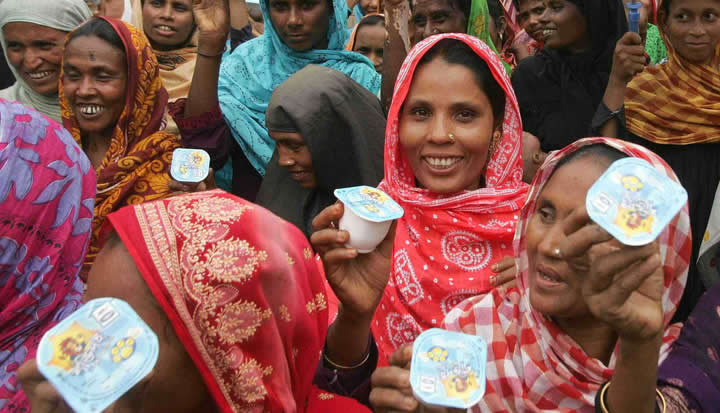 
Groupe Danone, the largest global producer of fresh dairy products, has done something unusual for a massive, global food business: it has experimented with selling nutritious foods to very poor people. This move is part of a growing interest in nutrition by big businesses.

If you live in North America or Europe, you’ve probably come across Danone’s products, most likely its yogurts. And the company is increasingly present in developing countries. In 2011, 51 per cent of Danone’s sales came from emerging countries.

In 2007, Danone and Grameen Bank invested a total of $1 million to create a small social enterprise venture in Bangladesh, known as Grameen Danone Foods. Grameen Danone produces a yogurt known as Shokti (Bengali for strength), which is fortified to meet 30 per cent of children’s daily requirements of vitamin A, iron, zinc and iodine. The goal is to increase consumption of these yogurts by children in poor, rural areas of Bangladesh.

Grameen Danone’s business model: It is innovative, but is it successful?
Grameen Danone was designed as a social business: it needed to be profitable, but all profits would be invested back into the business, rather than paying dividends to shareholders. The venture operates a single small factory in the city of Bogra, which was designed to use simple production techniques and minimise costs.

Grameen Danone’s distribution model was unique; it worked through saleswomen known as ‘Grameen Ladies’ to sell yogurts in remote areas where there were few shops or refrigerators to store yogurt. The saleswomen received training on how to promote the nutritional benefits of Shokti yogurt, and earned a commission fee for each yogurt they sold.

Yet despite its innovative features, Grameen Danone struggled both to earn a profit and to deliver nutrition to those who needed it. On the one hand, the venture was unable to secure a reliable supply of cheap milk. When fresh milk prices doubled in Bangladesh in 2008, Grameen Danone was forced to raise the price of Shokti, and sales plummeted. At the same time, sales by Grameen Ladies were low, and the venture operated at a loss.

Grameen Danone responded to low sales by beginning to sell yogurts to wealthier urban consumers, alongside those in rural areas. It used conventional marketing techniques, including TV commercials, to promote the yogurt’s health benefits and the fact that it was a social business.

Urban sales grew quickly, and by April 2010, they made up 80 per cent of Grameen Danone sales. While re-orienting sales had kept the company afloat, it had diverted it from its original purpose of providing nutrition to the rural poor.

Can social enterprise be big enough for nutrition?
Grameen Danone is trying to revitalise rural sales and promote new products for rural consumers. It hopes to double sales to urban shops and triple the number of Grameen Ladies, while using promotional events in villages to increase awareness and demand among the rural poor. The company has introduced a new product, a yogurt-cereal blend with a low price and a 30-day shelf life, to cope with the lack of refrigeration in rural areas.

Ultimately, Danone hopes to attract investment in the social business model to replicate it across Bangladesh.

However, it’s unclear whether the rural portion of the business can be made profitable and large scale. Grameen Danone may contribute to Danone’s efforts to expand its brand presence in South Asia, but how much will it contribute to reducing undernutrition for the poorest people?

The challenge is getting the people who really need nutritious foods to pay for them
The case of Grameen Danone also shows the challenge of convincing people to pay for nutritious foods. It has been pointed out that the rural poor in Bangladesh don’t normally buy yogurt products. Still, yogurt is already a well-established product across Bangladesh, produced by several national firms. If it is difficult to grow sales of a familiar product, introducing entirely new foods may prove even trickier.

This post originally appeared on the IDS Globalisation and Development Blog.

One response to “Can big business sell nutritious food to poor people?”