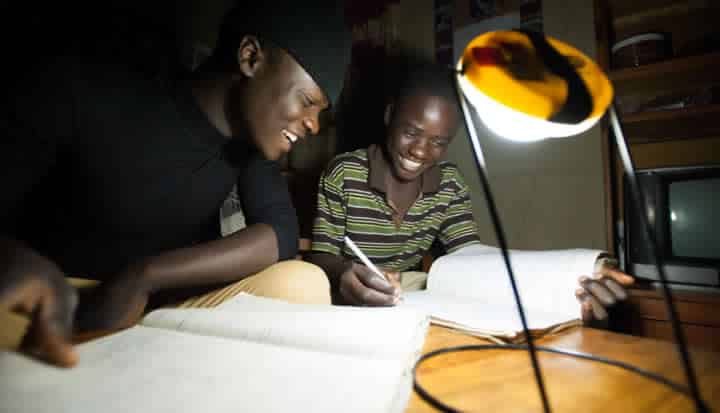 
As major players in the African pico-solar market met in Dakar in November 2012 for the World Bank Lighting Africa Conference, it emerged that SunnyMoney, SolarAid's ambitious social enterprise, has become the biggest last mile seller of solar lights in Africa ahead of oil giant, Total.

This progress is the culmination of many years' work by the charity SolarAid. SolarAid realised early on that the only way to get rid of toxic and expensive kerosene as the main form of lighting in rural Africa was by creating a pan-African market for solar lights, similar to the explosive growth of the mobile phones market across the continent over the last decade. So, to meet their target of eradicating kerosene by 2020, SolarAid founded SunnyMoney to develop a unique distribution model putting top quality, reliable pico-solar lights within reach of those who need them most. The charity's strategy has been to 'Invest in Africa' and seek to build the solar light market rather than restricting themselves to smaller aid programmes. This forward-thinking approach is now paying off, as SunnyMoney reports that light sales have topped 203,000 in just three years, with almost 70% of those lights sold in the last seven months.

Distributing at such an impressive scale is something a charity alone would be unable to achieve. Whilst acknowledging that aid has its place, this commercial approach ultimately will have significantly more scope for creating wholesale social change. SunnyMoney's strategy - and challenge - has been to 'think commercially' in order to distribute small solar lights in remote rural regions – beyond retail outlets and petrol stations – via the trusted education network, which means the solar message goes straight to the heart of the communities most dependent on kerosene. SolarAid firmly believes ‘Investing in Africa’ through social business is the best solution to mending market failure, and their SunnyMoney approach is delivering a solution that will ultimately change the fortunes of millions at the bottom of the fuel pyramid.

SolarAid has demonstrated the huge impact intelligent philanthropy can have in seed funding market solutions with a massive social impact, and has found that its 'mending market failure' message has huge resonance with donors, many of whom are disillusioned with the limits of traditional aid approaches, or excited by the prospect of what such an entrepreneurial approach could achieve. 'Investing in Africa' has massively escalated end-user reach and impact, and found enormous support from forward-thinking donors - from major organisations, such as Barclays and Man Group, right down to individual donors, including schoolchildren collecting pocket money. SunnyMoney is now instrumental in shaping micro–lighting standards across Africa and has an important voice in bringing pico-solar solutions centre stage, influencing governments and aid partners through promoting the 'Power of Pico' - small scale solar products that collect the sun by day and give out power round the clock, thanks to advancing technology.

Most importantly, SolarAid has proven that people prefer the option to work, save and invest their way out of poverty rather than accept handouts. SunnyMoney, an ethical brand with a clear social mandate, offers best-in-class lights with warranties so those at the bottom of the fuel pyramid can totally trust their purchase and enjoy rights as customers, rather than beneficiaries. Together, SolarAid and SunnyMoney are proving that we don't just know how to sell lights that change lives at scale, we're also proving that well-planned, strategically focused social enterprises can be extraordinarily powerful in changing Africa's fortunes. Naturally, SolarAid is delighted its brain-child, SunnyMoney, has grown from a small trading arm to a viable operation, knocking an oil multinational into second place – and just shy of the tipping point where it can attract serious interest from venture philanthropists who share our vision. All of which suggests that SunnyMoney could be just the first of many businesses SolarAid will incubate to resolve serious social issues through sustainable capitalism.