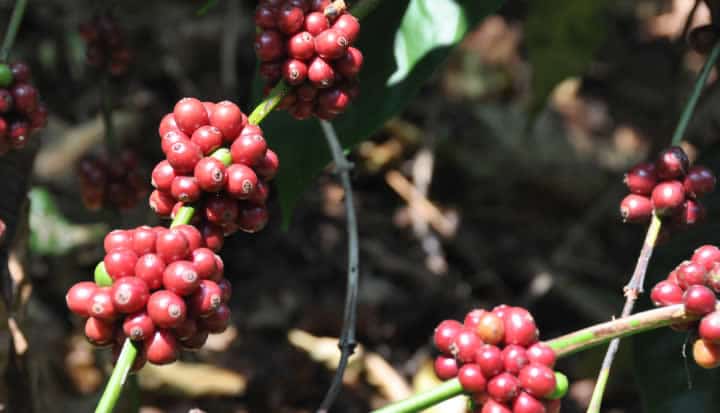 Coffee and Climate change:Doom or a new opportunity

A historic and unprecedented event at the COP 11 (CBD) Conference in October 2012 was the release of a landmark report, “Coffee to go? The vital role of coffee towards ecosystem services and livelihoods” by Pavan Sukhdev, the lead author of the TEEB report and UNEP’S goodwill ambassador .The fact that the report was undertaken at the request of the Karnataka’s largest growers federation-KGF-in partnership with CSM (a non-profit organization with a solid track record for over a decade in addressing the triple bottom line - of planet, people and prosperity),The report a landmark in that it is the first time a study that captures the role of Indian Coffee towards ecosystem services from all the three districts of Karnataka with support from the Coffee Board and the leading coffee business that has been initiated and led by farmers.

A snapshot of the report and its implication

The ubiquitous cup of coffee is characterized by massive economies of global production, consumption and trade. The economic value and the significant contribution of coffee to the State of Karnataka is formidable. Coffee is the largest agricultural export for the state and the state ranks Number 1 in coffee production in India. However, a dark cloud has been hanging and negatively impacting which, will/can even have catastrophic impact for the very survival of coffee because of the climatic change that is unleashing havoc on the coffee and the economy of the State of Karnataka .The shade grown coffee in Karnataka is not only a significant contributor to the revenue and livelihood of the State but the Agro Forest practice of shade Coffee(Coffee agro system is second only to forests in maintaining the flow of bio diversity and ecosystem services) is simultaneously a critical contributor to the Western Ghat ecology because of its symbiotic relationship with the fragile ecosystem that is a one of the bio-diversity hot spots of the world. These older than Himalayan mountain range is not only a play a critical role as the guardian of monsoon in Peninsular India that provides life sustenance to more than 245 million people through its river system that originates and flows Eastward draining in the Bay of Bengal (Cauvery, the Ganges of the South is the most sacred of the river).The Ghat is also home to hundreds of mammals, birds and amphibians some are so rare and threatened to extinction.

Shade Coffee by its very practice is a natural mitigate from a climate threat perspective and some of the century old practices of the coffee growers are almost classic practices of climatic adaptation. However a combination of factors viz Transformation of the market and production system of Coffee that is battering the Coffee producers majority of whom are very small producers added with new factor of climatic variance bringing unprecedented diseases, unpredictable and erratic weather that is causing very low or excessive rains including powerful gales that have wiped out centuries old precious trees-all of which devastating the Coffee farmer profoundly.

Squeezed and scissored between market and changing patterns in the monsoon, in which the small grower has least power-the grower has started to feel no incentive at all to continue the struggle in growing coffee .The grower who has always played the role of a positive guardian of the Coffee agro system that are self sustaining ecosystem is feeling alienated, frustrated and wiped out. The vulnerability of the grower and the larger vulnerability of the Coffee economy is intertwined with ecological vulnerability of the Western Ghats only further accentuated by climate change. The dark clouds of Climate change which can unleash havoc comprehensively for now and the very near future across economy, ecology, sacred culture and society all at cross road need not be a story of doom. This crisis’s can show us a way that is both opportunistic, creative and solution driven.

The short study on and about Coffee economy and ecology has given us more than a sneak preview of the vulnerability of Coffee economy and its surrounding environment but it also identifies the benefits that can be harvested and accrued with smart interventions along with enlisting range of stake holders. If the sector is to flourish forward looking strategies must be put into action without any delay

First step - The way forward and an action plan

In the end we seek to inform more progressive climate change adaptation policies and strategies in India in the interest of the small producer.