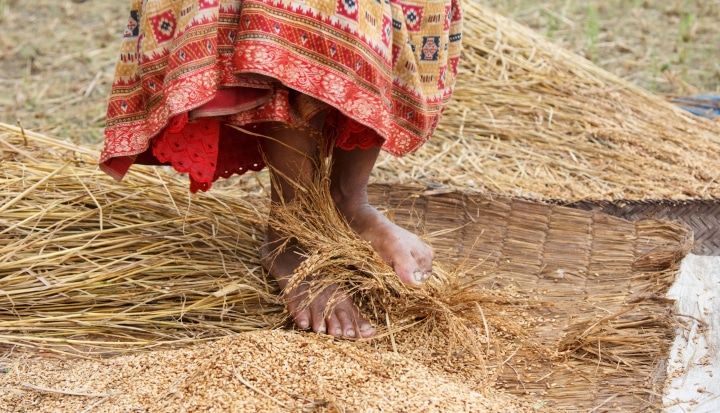 
Even the most groundbreaking ideas will fail if only one or two individuals pursue them. In order to reach a tipping point, an idea needs the support of a community—and the bigger the community, the better.

That’s why Ashoka invited more than 150 experts from diverse fields to a Globalizer Summit in Frankfurt, Germany this past June to discuss ways to create a "Nutrients for All" world. They agreed that a holistic, grassroots approach is required to create a global shift in the way we understand and manage flows of nutrients.

“This isn’t just about people,” said Bill Carter, director of Ashoka’s Nutrients for All, in his opening address. “This is about people, plants, land, soil, animals, oceans—their ability to access and absorb the full spectrum of nutrients that our common evolution requires for our vitality.”

Working in and through local communities is the only way to affect change at this scale.

“Agriculture, by and large, has depleted a huge amount of the world’s soils,” said Ashoka Fellow Ethan Roland. “Thirty percent of all arable farmland in the world is severely depleted and getting worse every day.”

No soil, no farms, no food. Period. With a statistic as troubling as this, the answer seems obvious—and imminent. So what’s holding up the solutions?

“It’s not that farmers are illogical people and want to damage the environment,” said Ashoka Fellow Brendan Dunford. “But farmers are responding to a single set of signals from the market place. They are being paid to produce more and more from the landscape in a more efficient way, and this is causing a lot of environmental degradation.”

If we look at farmers as “nutrient stewards,” responsible for managing the soil and water that ultimately add nutrients to our food, then the way we view nutrients at this foundational level—the level of the farmer—greatly impacts the entire nutrition discussion.

As Dunford points out, we must be doing something wrong if we’ve been unable to affect lasting change in the market thus far.

An Army of Empathy

A community problem demands a community solution, and bad nutrition is a problem that affects the global community. So the question, according to Roland, is how can we trigger a mass movement of “right buying behavior” that will send the “right” signals through the market?

The answer underscores the importance of the human dimension of community. It’s about people rather than technique—after all, we have the capacity to make more food, but it’s the engagement of people around the world that will tip the sector towards making better food.

That’s where empathy comes in.

“When [people] are poor and have many children, they need to decide what to buy,” said Konrad Biesalski, author of The Hidden Hunger. “So, they buy cheaper, less nutritious foodstuffs instead of the ones rich in nutrients.”

As a global community, this fact should be alarming. Empathy can grow when we connect with people around food, recognizing that the realities of hidden hunger—inadequate nourishment—are a problem everywhere—in both the developed and developing worlds.

This allows us to make better choices and send better signals. And local communities can respond.

Concerns about capital revolve around the creation of wealth. A person with wealth can purchase capital so they can then use to make more money, giving them more power and presumably more influence.

Ethan Roland proposes a new way of thinking about capital. He outlines eight distinct forms of capital to consider when mapping out a nutrient economy. A key characteristic of forms of capital is that different groups of people can exercise influence over them in ways that are distinct and particular their local community.

These eight forms of capital are:

What do these different forms of capital have to do with a nutrient economy?

“[Living capital] is the fundamental basis upon which all of us live and eat,” Roland explained. “It is, as it were, the principle asset for the world.”

Which begs the question, what would it look like if we were to invest in the non-financial forms of capital? When we recognize that it takes more than just the money-powered market to make the world go ‘round, we get a glimpse the exchange of power and influence—or lack thereof—that makes up the human dimension of the nutrient economy.

It takes a holistic approach to the human condition to reach a tipping point.

Planning, Education, Agriculture, Co-operatives and Environment (P.E.A.C.E) was started by Nora Tager as a way to unite individuals, living in dire poverty in in South Africa, around community needs.

“If we boil it down, it’s about access to information, services, and legal contract,” Tager explained. It’s “a holistic solution to stimulating education, rural enterprise, and economies, and developing reverence for the environment in rural spaces.”

It’s about something deeper than money. Wages are important—and were an initial focus—but the organization has shifted its attention to legal contracts that guarantee the protection of land, even if the land isn’t particularly profitable.

“It took time to say: ‘You won’t earn from it, but no one will take it away from you,’” Tager said, noting the pride that comes with ownership of land—and highlighting one way that a non-traditional form of capital can trump the more standard model.

Most important, it’s the local community that drives this initiative’s development. By meeting at central hubs, these co-ops give community members an opportunity to gather and discuss a variety of needs, such as health education, agriculture, access, and technology.

“It’s where people who are not strong in themselves band together,” Tager said. “The government doesn’t fully understand this.”

Perhaps we, as a global community, don’t fully understand this. This holistic approach—leveraging an entire range of “other” forms of capital—is what builds up local communities. And it’s in these local communities that minds begin to change.

After all, the nutrient economy has to start somewhere.

One response to “Agency Through Community”