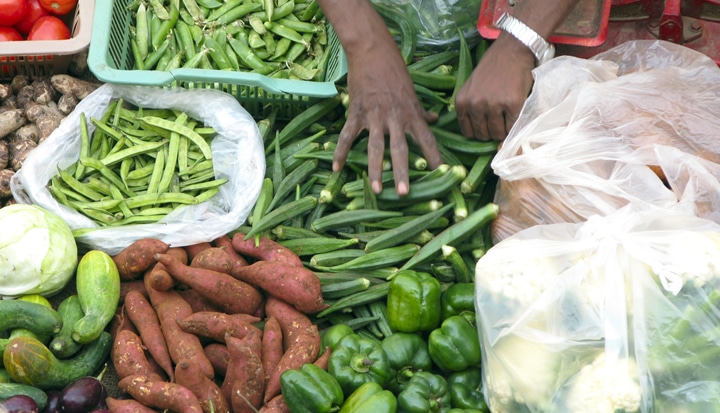 
You might be surprised to learn that the solution to global hunger doesn't lie in simply increasing the world's food supply. If more food isn't the answer, then what is?

For an issue as wide-reaching as global hunger, the basic questions can be the most important – and most elusive. For example, how do we know if we’re succeeding?

It’s not just a question of how much food there is, or how many spots on the map need more of it. It’s about changing the focus from the quantity of food to the quality of food. And that means nutrition.

More than 2 billion people suffer from malnutrition, a “hidden hunger” that is a reminder that having enough food isn’t the same as having good food. “The question of nutrients is missing,” said Michael Vollmann, co-director of Ashoka Globalizer.

This issue spans developed and developing world alike—people may feel full, but that doesn’t mean they’ve consumed the nutrients they need. And just as the signs of this “hidden hunger” are invisible, so too are the long term effects.

The answer may seem obvious: if people need nutrients to maximize their health, then global efforts should be focused on distributing them. That might work well if we knew the levels at which human beings need these nutrients.

But, as Ashoka experts have pointed out, all we have are normal, average values across different countries; we don’t have a normal, average value for the human population as a whole. Some 150 experts from around the globe gathered at an Ashoka Globalizer Summit in Frankfurt, Germany in early June to present many compelling answers for how to build a "Nutrients for All" world that supports the health and vitality of soil, plants, animals, and people.

One way forward is to look at impact. What effect does good nutrition have on people, and how does that impact them?

“[We’re] looking for the outcome of full nutrition,” explained Ashoka’s David Aylward. This requires tearing down silos between different fields and holistically examining what a well-nourished human being looks like.

Or, as Ashoka’s Al Hammond put it, we need to distinguish between people who are properly nourished and those who are not, and then work backwards from those two outcomes.

Two key areas where impact can be most easily seen are in a country’s workforce, and in its students. Without proper nutrition, neither the body nor the brain can develop properly. And without well-developed brains and bodies, communities crumble.

“In developing countries, malnutrition is responsible for 35 percent of all death cases among children under the age of five,” Aylward noted. And the World Bank estimates that countries lose 2 to 3% percent of their Gross Domestic Product (GDP) as a result of malnutrition.

These troubling statistics must be turned into demand for a well-nourished population. And this is where metrics can play the most important role: bridging the gap between the language of social entrepreneurship and of the private sector.

Determining the value of living capital – plants, water and organic matter – provides a good framework for beginning to think in this direction, according to Ethan Roland of Regenerative Real Estate. Developing some sort of “currency” for the land enables others to “invest” in it.

A holistic approach is the key: we may have the technology to measure the composition of the soil, but we still have to devise a way to measure its worth. This is the kind of thinking that empowers the nutrient economy, one that places value on the exchange of nutrients from the soil, all the way to the human body.

Another solution lies in measuring five key human nutrients: vitamin A, iodine, iron, folic acid, and zinc. Buddy Ratner of the University of Washington has proposed a low-cost, durable, and accurate tool for measuring these nutrients: a plasma pencil and a mass spectrometer.

It sounds highly technical, but the general idea is simple. Ratner hopes to create a device that can be plugged into something like a smart phone to provide a complete analysis of an individual’s blood.

The computer would detect the micro-nutrients in a sample of a person’s blood, making it possible to set parameters for different groups. It aims to break molecules down to better examine nutrient levels, and in so doing, develop a better understanding of what “normal” nutrition should look like.

The same technology can be used to analyze water, milk, soil, hair, pesticides and more. The key for such a device is affordability and mobility: measuring nutrients with a light-weight, portable device that can be used in the field.

Any solution to global hunger must begin by developing a system of metrics so that we can measure the nutrient potential around us. Understanding what makes up good nutrition will go a long way toward helping us to understand how we can build more sustainable methods of harnessing it. And private sector investment is much more forthcoming when reliable metrics for measuring success are in place.

George Soros put it well: “You can’t manage what you can’t measure.”