Women’s Financial Inclusion in West Africa: From Policy to Practice 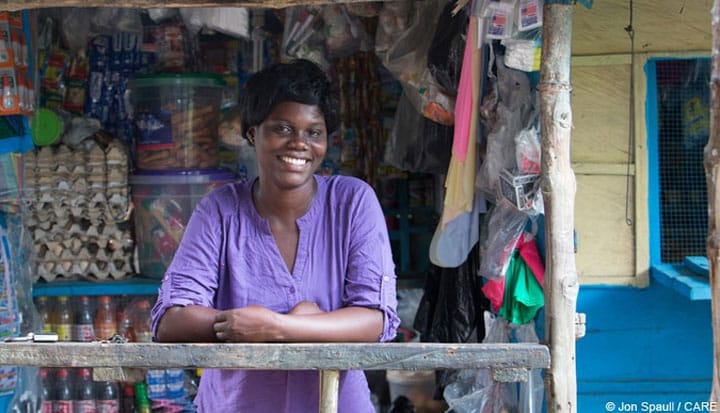 
The Decade of African Women – launched in 2010 by the African Union – has seen significant strides made by African countries to advance gender equality and women’s empowerment. Notable within West Africa has been the drive towards women’s economic empowerment.

Launched in October 2010 as the Decade of African Women, 2010 to 2020 was set aside by the African Union and its member states to advance gender equality and women’s empowerment commitments on the continent. Today, the majority of African countries guarantee gender equality and women’s rights within their constitution. Legislative instruments and policies have been formulated and adopted to mainstream gender into government budgets, projects and programmes and to address discriminatory practices against women and gender imbalances in the social, political and economic fabric of society.

Notable within West Africa has been the drive towards women’s economic empowerment. In 2012, the Economic Community of West African States (ECOWAS) established the Federation of Business Women Entrepreneurs to promote women’s economic empowerment. Also, the Central Bank of West African States’ financial inclusion strategy aims at financial inclusion for 70% of the adult population of its member states by 2020. Countries, including Côte d’Ivoire (2013-2018), Ghana (2012-2017), Niger (2014-2018) and Sierra Leone (2017-2020), have also already designed National Financial Inclusion Strategies to ensure access to financial services for all. These measures reveal the credence with which the African woman’s role is recognised as vital to the economic development of her country. In as much as progress has been made in women’s empowerment on the continent, systemic barriers harboured in poor implementation of laws and policies have hampered the realisation of gender equality. (The 2017 UN High Level Panel on Women’s Economic Empowerment identified adverse social norms; discriminatory laws and lack of legal protection; the failure to recognise, reduce and redistribute unpaid household work and care; and a lack of access to financial, digital and property assets as major constraints to women’s economic empowerment.)

Despite the existence of a strong policy architecture within the West African region, progress towards women’s economic empowerment has been slow. Overall, women earn less than men due to the employment options available to women. The low wages of women can be largely attributed to the emphasis on “agriculture and informality as a share of female employment, the time women spend on unpaid household work and care, high fertility rates and discriminatory social norms” (Leave No One Behind: A Call to Action for Gender Equality and Women’s Economic Empowerment: Report of The Un Secretary-General’s High-Level Panel on Women’s Economic Empowerment). For instance, in Côte D’Ivoire the bulk of women working in agriculture are engaged in sustenance farming whereas men dominate in the sector’s production of cash crops such as coffee, cacao and cotton. Women mainly serve as manual labourers in cultivation of cash crops. Similarly, in Ghana women are 1.7 times more likely to be in casual work (without contracts or job security) than men, while about 27 per cent of men are in salaried jobs compared with 9 per cent women. Most women find themselves working within the informal sector, often under precarious work conditions, with little or no form of health insurance or pension. Even though labour laws and policies are directed at addressing these inequalities, poor implementation of said policies and laws prevent women from benefiting from their economic participation.

These inequalities also persist due to socio-cultural practices upheld by both men and women. Some social constructs of the roles of women and men promote gender stereotypes that exclude women from fully participating in economic, social and political activity. Practices, including early marriage, place young women at a disadvantage as they are unable to complete their education and are forced into raising children while they themselves are still children. With little to no education, women are unable to rise to positions of leadership within their communities. Furthermore, they are less likely to run for political office due to the absence of financial support and negative stereotypes associated with women in politics, to name a few. Sierra Leone’s current parliament has only 16 women out of 124 parliamentarians and in its cabinet of over 40 ministers, only three cabinet and five deputy ministers are women. The absence of women in governance only further prevents the implementation of legislature responsive to their needs.

Additionally, existing policies and laws have not necessarily ensured the rights of women. Although the constitutions of most West African countries recognise gender equality, some laws are imbedded with elements that deny women the very rights the laws espouse. For example, in Togo, Article 99 of the 2012 Persons and Family Code recognises the husband’s position as head of the household, while customary law provides for fathers to have sole parental authority. This conception of “head of household” is problematic as it ignores the existence of female-headed households as is the case with widows and single mothers. Moreover, giving sole parental authority to the father eliminates the critical role played by the mother who is often the only constant caregiver.

The absence or ineffective implementation of policies surrounding women’s access to financial resources further hinders their economic empowerment. Due to their limited access to land and other forms of property that serve as collateral for bank loans, women are often denied the opportunity to expand or even start economic activity. They are equally deterred from accessing formal financial institutions like banks due to their low levels of financial education. For most of these women, the only way of acquiring capital is through microfinance and informal savings groups (such as the Village Savings and Loan Associations). Yet, the poor regulation of the microfinance sector and the lack of formal recognition for women’s savings groups places them at a disadvantage. Even in countries such as Ghana, Côte D’Ivoire and Benin where National Financial Inclusion Strategies exist, they are yet to be realised in the lives of women.

The role of ECOWAS and of civil society

To tackle these difficulties, ECOWAS Gender Unit should play a lead role in the promotion of women’s financial inclusion at the regional level. The Gender Unit should ensure the prioritisation of women’s financial inclusion on the agenda of the ECOWAS Commission. Although the AU has launched the Decade of African Women, the ECOWAS Commission should work with governments, central banks, financial service providers (microfinance institutions, banks and telecommunication companies) and development partners to have a holistic approach to truly achieve women’s financial inclusion and empowerment in West Africa. Regional civil society organisations (CSOs) including West African Civil Society Forum (WACSOF), West Africa Women’s Association (WAWA) and the West Africa Civil Society Institute (WACSI) have a fundamental role to play in galvanising CSOs’ support in this area.

The need for affirmative action

The economic empowerment of women cannot be realised if women are absent from the governance of their countries. There is a need for countries to ensure the implementation of affirmative action policies. In countries including Ghana, Benin and Sierra Leone, where affirmative action bills are pending passage, civil society has a critical role to play in advocating for the passage of these bills and educating the population on their importance and merit. Civil society’s capacity must be strengthened to enable them to successfully undertake these tasks.

‘Women on the Move’

In line with this, WACSI, CARE International and development partners have embarked on the ‘Women on the Move Impact Growth Strategy’ project (WoM-IGS) to accelerate women’s economic empowerment and financial inclusion processes in West Africa. The WoM-IGS project aims at ensuring that 15 million women and girls between the ages of 15 and 64 experience positive change in their socio-economic status and possess adequate information, skills and techniques to influence and advocate for policy changes at local, national and regional levels. Through its inaugural regional workshop in February 2017, the partners have developed a regional advocacy strategy and efforts are underway in eight countries (Ghana, Togo, Benin, Côte D’Ivoire, Mali, Niger, Sierra Leone and Chad) to design a national advocacy strategy for women’s economic empowerment.

Strategies must be actionable and inclusive

Governments should ensure that their National Financial Inclusion Strategies are not only well-crafted documents but actionable roadmaps, truly inclusive of women. These strategies should recognise the distinct ways in which men and women are denied access to financial resources and work to respond to the needs of all, with strategic focus on women’s financial inclusion. National Financial Inclusion Strategies should equally incorporate informal savings groups, providing support for their growth and development. Formed within communities, the group cohesion, trust and respect built among members of these informal savings groups holds the promise of propelling women into leadership roles, having a ripple effect on the social, political and economic empowerment of women. The report of the 2017 UN High Level Panel on Women’s Economic Empowerment presents valuable recommendations which when implemented by countries will close existing gender gaps and ensure full economic empowerment of women.

Undoubtedly, West Africa has made noteworthy strides in terms of women’s economic empowerment. The sub-region has a rich array of policies and laws supporting women’s economic empowerment, but until these legal instruments are practicalised and enforced they will achieve nothing. Governments, regional organisations, civil society and citizens must play their due role in ensuring the financial inclusion of all, especially women, to truly galvanise for the development of West Africa.

This article first appeared on CARE International UK and is reproduced with permission.