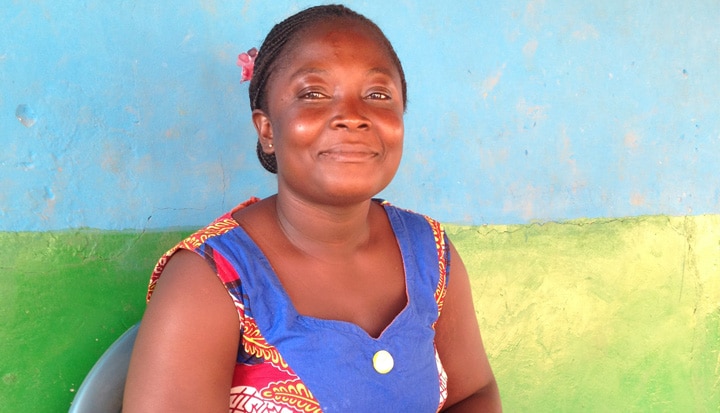 
It took a strong, single young mother of two to bring you the delicious chocolate egg you are biting into this Easter. Just a few years ago Anita, a young, unemployed, single mother of two seemed an unlikely community leader. But her fellow villagers in Ghana’s Odumase District, recognized her strong leadership abilities, recommending her as an excellent champion for women living in cocoa communities who were struggling to see a future in cocoa.

The Cocoa Life Project run by food giant Mondelez with support from international charity VSO and other NGO’s, has been running for seven years. This latest work delivers training to young women to develop business skills and teach them about healthy living and nutrition, so that families have improved health and income.

“I want to encourage the youth to see how cocoa has helped me and how, through cocoa, I can now support my family and my children are at school. It is a good business if you run it in the right way.” said Anita from Ghana last week.

When the Cocoa Life project started in this community Anita’s grandmother asked her to represent the family, because she was a cocoa farmer, but was too old and not very active. After joining the cocoa cooperative on behalf of her grandmother, Boateng was inspired to become very involved.

“I mobilized people for meetings, going house to house to call for meetings, cleaning and preparing the space. The community saw how active I was and asked me to be the Cocoa Life Women’s Extension Volunteer for Asikasu.”

Women Extension Volunteers (WEVs) are trained by VSO to be the link between cocoa communities, farming extension services and training on issues like child labour, nutrition, gender quality, income diversification and the all-important Village Savings and Loan Associations (VSLAs).

The major challenges in this community are a lack of employment and livelihood opportunities as traditional cocoa farming had not been very lucrative. Anita explains that most young people aren’t interested in farming so they migrate to bigger towns for work. Had it not been for the WEV program she says that she too would have migrated,

“Because there is nothing for us here except cocoa farming, and on its own cocoa used to earn us very little.”

When Anita came back from her training sessions she was inspired to form a women’s group and taught them how to make their own cassava products.

“If I had more courses, people would go every week!” she said.

Boateng says that many women used to complain about having no money so they are excited to learn additional skills and techniques to produce products. One such product is ‘Super Gari’ which is made from locally grown cassava flakes and then fortified with locally produced Soya beans. “There are two women who have used what I taught them impressively. They engage in gari processing and are adding soya to their gari and it’s really helping them in their business.”

Boateng supports her two children and grandmother with the money she makes. “In a week now I can sell 20 cups of cassava flour to the women who need it to make pastries. I make 40 pesewas on each cup. I would also love to use flour to make pastries but I don’t have an oven [yet].”

Cocoa Life has also helped Boateng grow her self-confidence. “People want to hear my opinions now. This is empowering that I am a leader in my community as such a young woman.”

That these women in Ghana’s cocoa farming villages are transforming their communities positively for generations to come surely makes the taste of these Easter eggs all the more delicious.

Find out more about the Cocoa Life Project between Mondelez (owns Cadbury) and VSO which has been running since 2008 to secure the sustainable livelihoods of a million farmers in cocoa-growing communities across Ghana, India, Indonesia and the Caribbean

One response to “Women Extension Volunteers in the Cocoa Farms”