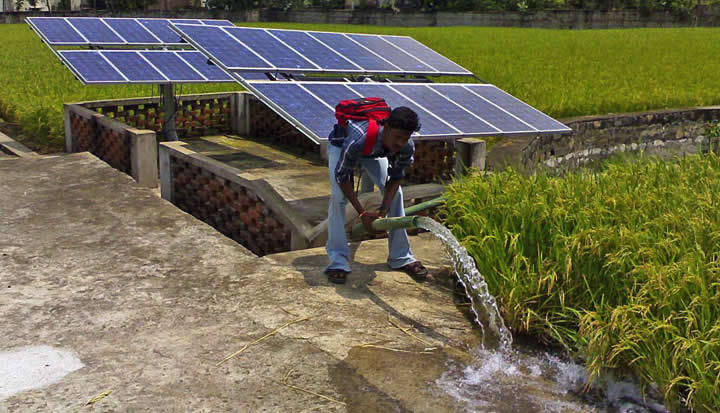 Click here for more stories about
Environment
Wednesday May 8 2013


What if we could harness the limitless power of the sun to carry water to the crops of millions of small poor farmers around the world?

If I want to water my petunias, I turn on the tap outside my house, hold my thumb over the end of a battered green hose, and water away.

If a small farmer in Ghana or China wants to water a small patch of vegetables he’s growing to sell in the local market, he breaks his back hauling water in two buckets or sprinkling cans from a nearby stream. It takes six hours a day every other day for three months to water a tenth of an acre of vegetables that he hopes to sell for $100.

A foot-operated treadle pump that costs $25 will irrigate as much as half an acre with about four hours/day of work to earn a transformative $100 or more in new income after expenses. But this is very hard work, and anybody in his right mind would prefer to use a mechanized pump if he could afford it. A five horse power diesel pump irrigates two and a half acres of vegetables, but it costs $350, and $450 a year for diesel, and another $150 a year for repairs - $2100 over three years, not counting the damage to the crop when the diesel pump is down waiting to be repaired. It is too expensive for poor farmers.

What if the same farmer could use a 2-kilowatt electric pump powered by solar photovoltaic panels instead? The fuel costs and operating costs would be pretty close to zero. But, there’s a big catch. It would cost about $7,000! Most small farmers in Asia and Africa could never afford to buy one of these either.

A Way Out of Poverty for Rural Farmers

But there is a way out! What if we could find a way to cut the cost of a 2-kilowatt solar pump system from $7,000 to $2500? What if we added a $1400, 2.5-acre low-cost drip system, and used the solar pump/drip system to grow 2.5 acres of diversified off-season fruits, vegetables and spices? Doing this, farmers can clear at least $4500, enough to make payments on a 3-year loan or lease and put some real money in his pocket. That’s the way out of poverty!

The SunWater project aims to achieve breakthrough affordability for photovoltaic pumping and irrigation, enabling small farmers all over the world to move out of poverty. Farmers using these pumps will also provide jobs for the their neighbors to plant, weed, harvest and market the crops they grow.

Today, 19 million diesel engines are being used to pump irrigation water from shallow wells in India alone, spewing millions of tons of carbon into the atmosphere. If marketplace forces could replace a quarter of them with radically affordable solar photovoltaic powered pump systems, we could transform small farmers’ livelihoods and radically reduce rural carbon emissions.

We are launching an Indiegogo campaign to develop a 2kw solar-powered pumping system that can do the same job as a 5 hp diesel pump, the most commonly used size. We’re taking a whole-systems approach - we use mirrors to concentrate the sun, which brings down the cost of the solar cell. Since we’re pumping water, we use the water to cool the solar cells, increasing their efficiency. We hook up an inverter so we can use an AC pump motor, which are widely available and cheap. Then we tune the mirrors, solar cells, cooling system, and pump so that it gives the right output for the right cost.

These pumps can only pump during the day, but they don’t use diesel fuel, they rarely break down, and when they do, they can be repaired easily. This system has very low operating costs compared to a diesel pump.

The system will cost $2,500 instead of $7,000, and when paired with a low-cost efficient drip irrigation system, a farmer can pay it off in two years. This quick payback time makes all the difference. At that price, with access to leasing to overcome the purchase price barrier the solar pumping systems should fly off the shelf . And after the payback, there’s no fuel to buy. The Indian government has a 20% subsidy on these systems, so the cost to the farmer will be close to $2,000.

If you too want to help transform the lives of poor rural farmers so they can raise themselves out of poverty, you can contribute to this Indiegogo campaign.

This project will open the door to transforming water pumping for farmers in developing nations, and start them on the path to bringing electricity to a billion people who will never connect to the grid. The best way to predict the future is to invent it. Will you help us invent a future of abundance for the people who need it most, rural farmers in India and Africa, by contributing to Indiegogo?

If you want to hear more about the project, the team, and the technology, stay tuned for my next blog post!