The chocolate entrepreneurs of Peru 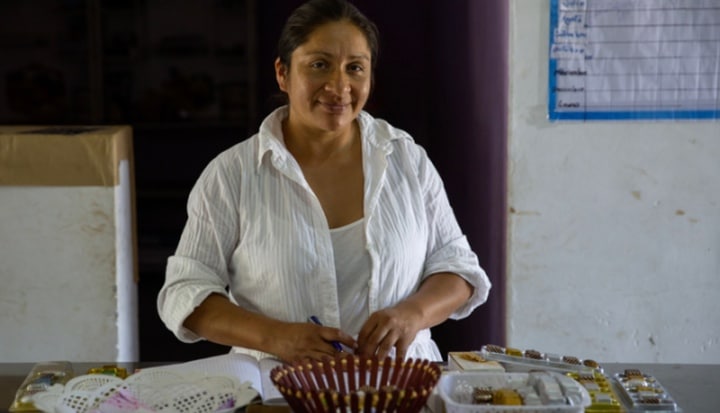 Sustainability is justifiably the theme of this year’s International Women’s Day and the latest report from the Intergovernmental Panel on Climate Change (IPCC), published on 28/2/22, confirms what Fairtrade farmers have long been aware of: the climate crisis is here, it is real, and it is threatening. But by developing ‘value-add’ products, rather than solely raw commodities could offer a solution to people’s livelihoods.


In El Palo Blanco, a small town in the northeast of Peru, locals have been growing coffee and cocoa for generatins. But because Palo Blanco is situated in the lower lands, at the foot of Piura’s mountainous region, it is getting hotter each year, unpredictable weather and increasing prevalence of pests and diseases that threaten the survival of delicate plants like arabica coffee. The community realised they could no longer depend solely on farming. As Daycy Montalban Calderon, a farmer who has returned to her hometown after living in Lima for several years, says: ‘Here in the countryside farmers struggle. There have been differences in the weather and the climate over the past few years. In general all of the crops have suffered due to the climate. They have changed, some plagues have appeared and insects that were never here have appeared – very aggressive insects. The production has decreased and the intensity of the flavour of our cocoa has changed.”

Sustainability is justifiably the theme of this year’s International Women’s Day and the latest report from the Intergovernmental Panel on Climate Change (IPCC), published on 28/2/22, confirms what Fairtrade farmers have long been aware of: the climate crisis is here, it is real, and it is threatening. ‘The last phenomenon [El Nino] left the land and the soil weak, also the plant which is weak. The El Nino means higher temperatures and more rains, it was an unbearable heat that started at 11am until 5pm. There were moments when we were suffocated. The plants fell to the ground because of the lack of water, many of them died and it took a long time for them to recover. We had to plant new crops,’ explains Daycy.

But by developing ‘value-add’ products, rather than solely raw commodities could offer a solution to people’s livelihoods. In 2015, a few years after a devastating outbreak of La Roya, or ‘leaf rust’ a disease that wiped 80% of farmers’ coffee crops out, Juan de la Cruz, the vice president of Norandino, a Fairtrade certified co-operative, saw the opportunity to start a project making chocolates. With many farmers switching from coffee to cocoa, there is a steady supply of beans, and a women’s group, established by the wives and daughters of co-operative members was set up to run the venture. Six years ago, Daycy returned from Lima to her home town and began growing cocoa because she saw they could earn a better price though the Fairtrade, she says: ‘While I was in Lima my mother was planting cocoa, it was well managed and well planted, so when I came back we were able to produce it to sell to the cooperative.’

Daycy was elected as the president of the Palo Blanco Emprenderdoras (entrepreneurs), who process cocoa grown on their farms and sell to local markets. The women’s association has had a huge impact for the 18 women who are members and it has changed attitudes about gender within the community. The women’s association has had a huge impact on the women in the community’s lives. It was difficult to set up and gain support for as Daycy says: ‘I remember the struggles at the beginning, when we set up the association. As women in this society, most people see us just for taking care of children, taking care of the house and supporting on the farm, this is our work. When we started the association, our husbands didn’t have faith that we would get as far as we have already done.’

The women’s association has enabled them to generate income for themselves, given the group an understanding of the market, quality regulations and standards required for setting up as chocolatiers for which they have gained respect within the community. Daycy says: ‘Personally, the women’s group has helped me 100%. It has helped me to validate myself, to recognise and accept, to love myself and defend what I want to do in my life. It has elevated our self-esteem.’

Along with the members of the women’s cocoa group Daycy learned how to produce, market and sell chocolate. They are proud to be making chocolates, with cocoa grown and cultivated by the community. Chocolate is a higher value product worth more than the cocoa beans that are usually exported internationally. When they can sell their chocolate it supplements the families’ incomes.

The group are trying to sell their organic, high-quality chocolates within Peru, it was going well for a couple of years and they are supported by the co-operative, which accesses funds to support the group and gives them free use of their facilities, buildings, and the cocoa paste plant which has professional machinery for processing. However, the pandemic has made things difficult, they could no longer sell their chocolate at fairs across the region. Like many people in the community Daycy was unwell, having had Covid-19 twice in the past two years. As she says: ‘During the pandemic there was no work, the association no longer produced chocolates therefore it had no income. In general it affected our community: with economic losses, loss of human life and psychological damage to the families of our community.”

Today Daycy and her husband continue to grow cocoa, lemon and papaya which they use to flavour their chocolates. They have received training from Fairtrade to help grow good cocoa that fetches a higher price through the cooperative. But the cost of living in Peru has risen extremely since the pandemic, everything is more expensive, “Because of the pandemic everything is expensive, organic fertilizers are very expensive and it has not been possible to improve production.’

What’s making life even harder for farmers is new climate-related challenges, as Daycy says: “Well as a big challenge that still continues today is the climate change that consequently is now the droughts in the Palo Blanco community, also the pests that are becoming more and more resistant to organic pesticides with what was previously fought.”

The community is working to protect their land, and they are hopeful of government support as the Ministry of the Environment in Peru has dedicated 200 hectares to conservation, where native trees are planted to protect biodiversity, and the farmers themselves follow good agricultural practices, including organic farming, not using chemicals and their cocoa trees help to capture Co2. Businesses can support them by sourcing Fairtrade, as Norandino’s members have the solutions, but they need sales and investment to help them adapt.