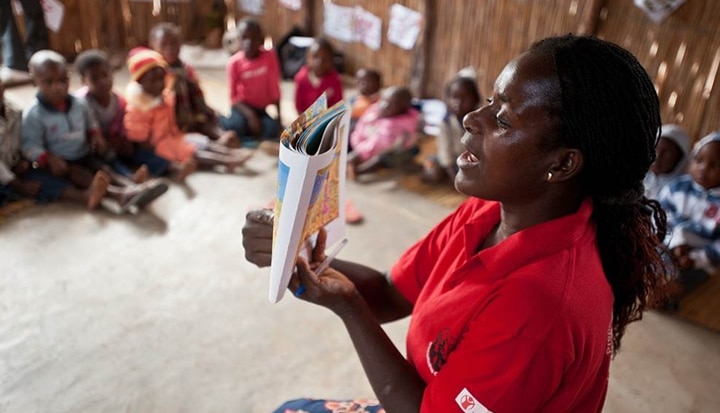 Photo: Save the Children


With world champions Spain, the Netherlands and Chile in their World Cup group, it’s fair to say that Australia were always going to struggle to make an impact in Brazil last month.

But they will have a much greater say at another global gathering this year, one that could have much grander implications for Brazil and the wider world. The G20 Leader’s Summit, this year hosted by Australia in November, aims to build global economic resilience and stimulate growth. Taking place in the midst of the UN negotiations on the Post-2015 development framework, a debate that is rapidly turning towards the tricky question of how to fund the new set of goals, the G20 could lay the foundations for a new approach to development financing. That new approach is needed now more than ever.

The Overseas Development Institute has estimated that additional funding required, over and above all existing spending, to meet expected Post-2015 targets in education, health, water and sanitation, food security and nutrition alone will be somewhere between $26 billion and $50 billion per year for each of the four sectors. Development aid alone won’t cut it. Much of the funding will need to come from developing countries themselves. As such, it is positive that the G20 agenda includes a focus on modernising the international tax system and fighting corruption. A new report launched by Save the Children this week suggests that addressing these issues will be central to eradicating preventable child deaths and to ensuring access to clean water.

In 2011, almost US$1 trillion was siphoned out of the budgets of the poorest countries through illicit financial flows like tax evasion, bribery, money laundering and manipulation of trade prices. Partially as a result, half of sub-Saharan countries collect just 17 percent of their GDP in tax compared to 35 percent in rich countries, which means they’re effectively being stunted in their ability to improve their economies and help their most needy citizens.

For example, between 2010 and 2012 five dodgy deals cost the Democratic Republic of Congo over US$1.3 billion in revenues through the undervaluation of assets and sale to foreign investors, according to the Africa Progress Panel 2013 report. This sum represents twice the annual health and education budgets of a country with one of the worst child mortality rates in the world and seven million school-aged children out of school.

But there have been success stories too.

In Rwanda in 1998, the federal government used part of a £20 million grant from the United Kingdom to set up the Rwandan Revenue Authority. Since then the UK and other donors have helped make the RRA more efficient to the point it now collects the value of that original grant every month.

Save the Children’s new report Tackling Tax and Saving Lives argues that if all developing countries captured illicit financial flows, they could wipe out preventable under five deaths entirely by 2030 – 20 years ahead of the current timeline.

Tax is often a dirty word in the political debate in wealthy nations. But this isn’t an anti-business agenda- particularly when talking about illegal tax evasion, as opposed to the ethical debates on tax avoidance.

Robust tax systems are the core of modern, developed economies, and there is clear evidence that developing economies that bring in more tax revenue also enjoy reductions in poverty like lower under-five mortality, more children that complete primary school, and more people with access to improved water and sanitation.

Increasing tax revenue to 20 percent of GDP could save almost 287,000 children’s lives each year and provide an extra 72 million people with access to clean water, according to our report. These sorts of figures really do bring into perspective detailed wrangling on tax codes and reporting systems.

But the benefits of taxation go beyond financing. Budget commitments garnered from domestically mobilised revenues indicate political commitment and governments are more likely to be accountable to the citizens who paid taxes. What matters is not just how much money is available to be spent, but where the money comes from and how that shapes spending priorities.

But developing countries cannot achieve this alone- this requires concerted global cooperation. To help developing countries recoup lost tax revenue, developed countries must put their own house in order, honouring commitments made to clamp down on tax havens and encouraging corporations on their shores to be more transparent about ownership, profits and tax payments.

For the last month, the world has been well and truly engrossed in the biggest sporting event on the planet. And while the lead up meetings to the G20 Summit will happily take place in the shadows of the World Cup, hopefully the legacy they leave behind will have a lasting impact on the world’s poorest people for many generations to come.

Francis WestWikipedia: Francis West was a Deputy Governor of the Colony and Dominion of Virginia. →