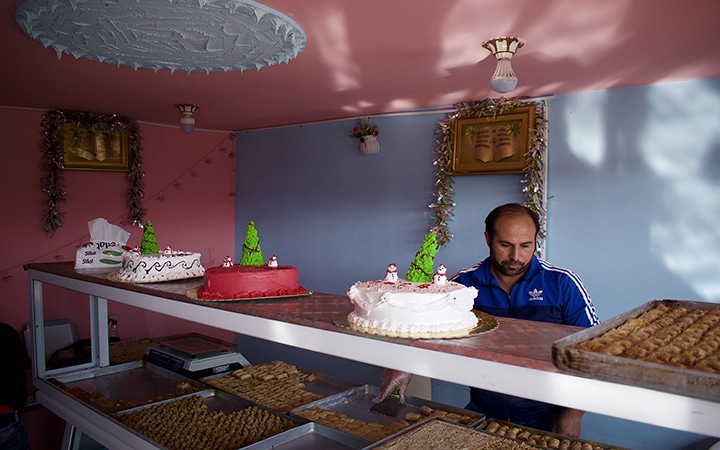 
“Syrians are famous for their sweets,” says Mohamed Said. He and his son-in-law, Emad Mahmoud, are Syrian refugees living in Darashakran Camp, near the city of Erbil in northern Iraq. They make a living selling handmade cakes and baklava – a pastry filled with chopped nuts and sweetened with honey.

Said and Mahmoud run Sima’s Sweets, one of several confectionery shops in Darashakran Camp. Sima’s Sweets currently sells ten to fifteen kilograms to camp residents every day, but Said and Mahmoud want to sell their products in Erbil, a city with over 850,000 inhabitants, where there are already many successful Syrian-owned sweet shops that are.

Thanks to a project run by the United Nations Industrial Development Organization (UNIDO), with funds from the Governments of Austria and Japan, their dream to expand their business is one step closer.

The Darashakran Camp opened in October 2013 and is now home to nearly 11,000 Syrian refugees, mainly coming from the north-eastern Syrian town of Qamishli.

As Syria enters an eighth year of war, Darashakran Camp is taking on an air of permanency. Brick houses have replaced UN-provided tents, and many residents are finding ways to make an income. There are over 400 shops in the camp operated by entrepreneurial residents, selling everything from wedding dresses and lingerie to take-away meals and ice cream.

“The refugees here want to work,” said Camp Manager, Ashna Gardi. “With less money coming from international donors, supporting camp residents in attending to their own needs is more and more important.”

UNIDO offers training sessions to boost economic and food security for refugees living in the Kurdish Region of Iraq. Darashakran Camp is one of the sites where those involved in food production are being taught about hygiene and safety and given the know-how to bring their products to the market.

The training has helped Sima’s Sweets to develop its existing business.

“The training showed me the importance of business skills and of following health and safety standards when working with food,” says Mohamed.

It is also helping Sima’s Sweets to improve packaging and to implement a business plan that includes the delivery of orders to Erbil – a forty-five minute drive from the camp.

While entrepreneurial skills and know-how are vital to expand their business, Said and Mohamed must also take care of the basics of their production, and in this context UNIDO is sponsoring renovation works for the camp‘s confectionary shops, including Sima’s Sweets, providing them with the infrastructure and equipment to grow their businesses and build a sustainable future.

This article first appeared on https://www.unido.org/ and is reproduced with permission of the United Nations Industrial Development Organization (UNIDO).