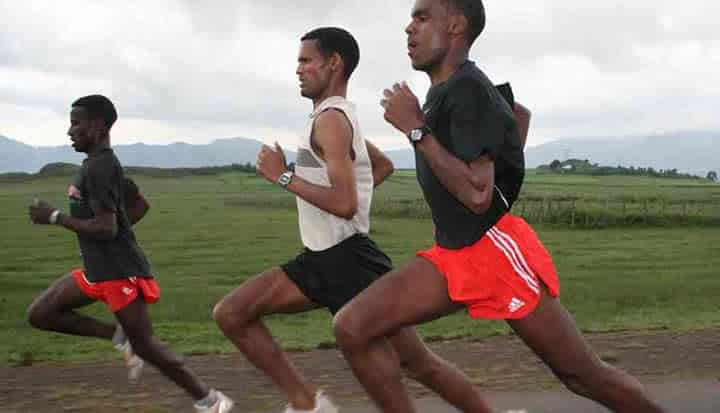 An interview with Malcolm Anderson, Co-Founder,Running Across Borders

An interview with Malcolm Anderson, Co-Founder,Running Across Borders


Malcolm Anderson is the Co-Founder of Running Across Borders, an inspiring organization that seeks to expand economic opportunities to East African youth through running. Malcolm truly is at the intersection of international development and athletics. He holds a Masters degree in African Studies (Oxford 2008) and a MA in International Relations (St Andrews 2006) and was the Canadian Robert T Jones Jnr. (Bobby Jones) Scholar at the University of Western Ontario, Canada (2005). He is a keen runner and all round sportsman having captained St Andrews University Men’s Tennis Team, played competitively for St Andrews and Oxford University’s Golf teams, and represented St Hugh’s College 1st Tennis Team.

Introduce the Readers to Running Across Borders

Running Across Borders is a social entrepreneurial organisation that supports grassroots athletics in East Africa and sports management for a group of talented International athletes from Ethiopia, Kenya, and Britain. We seek to provide opportunities for them to make the most of their talents ultimately through international racing but open opportunities in the running industry should they not reach the professional level. Our training camp has been going in Addis Ababa providing structured coaching, physio/massage support and mentorship.

I’d always been interested in athletics and ran cross country whilst at school. When I was 18, I left the UK for the first time and spent a gap year in Kenya. I was living at an altitiude which was quite a shock for my lungs, teaching Physical Education, English and Geography at a remote Kenyan secondary school 7 hours North West of Nairobi. I was responsible for the school’s cross-country and Athletics Club during this time. Living at an altitude of 6,500 feet in the Kenyan Rift Valley opened my eyes to the world of East African running, education in the region and the challenges that high unemployment has on youth. I met several inspirational athletes during my time in Kenya and several years later, during my MSc in African studies, returned to the experience and took a closer look at the history of athletics in Kenya. While the East African context is perfect for training there are so many people in the region who aspire to become an athlete but, don’t have the contacts nor the infrastructural support.

What is your favorite story of a Running Across Borders Athlete?

Dinknesh Tefera is a 25-year-old female Ethiopian athlete from the town of Bekoji, the same town as the Bekele brothers and Dibaba sisters as well as the recent female Ethiopian Olympic Marathon winner Tiki Gelana. Three years ago nobody knew who she was. Running Across Borders supported her through her domestic training and facilitated her first international race in October 2010 which took place in the wilds of Scotland. She won the Loch Ness marathon and set a new course record of 2hrs 46mins on a very hilly course. You can imagine that for an Ethiopian athelete the cold and wet winds of the Scottish Highlands came as quite a shock. She took part in her second marathon in Rome in March 2011 and came 9th, beating her previous best by more than 11 minutes and coming home in 2hrs 34 mins. In 2012, Dinknesh took part in the Hamburg Marathon and again finished in the top 10 finishing in 2hrs 29 minutes, a new personal best. She has secured Nike sponsorship and it is so satisfying seeing her come home from Hamburg after three years of hard work with coaches, friends and family, and with a sponsor behind her. She’s now looking forward to her next major race this autumn.

How does Running Across Borders secure funding?

Running Across Borders takes a social entreprenuerial approach to funding, which combines traditional grant based funding with an ability to generate our own funding through programmes such as Running Across Borders Visit and Train, which provides foreign athletes the opportunity to train at altitude in East Africa in return for a contribution which helps support our work. Over the last 3 ½ years we’ve had near to 60 individuals from 4 continents and in disciplines from sub elite triathletes, recreational and serious club runners to families who come and experience the East African running culture.

Tell the readers how sport is fighting poverty.

I think if you look at the example of Dinknesh who came from a poor, rural, subsistence background with very little opportunity to build a different life for herself. She’s managed to earn her own way to a living through her own hard work and dedication. Her experience has motivated her friends in Bekoji to recognise how sport, and the commitment that comes with it, can be a tool for personal development. She has her own income and independent future as a consequence of sport. Of course, sport can’t solve every problem but for other people living in Bekoji Dinknesh is now an example of how it is possible to build a life beyond the village, and that’s a very important thing for people to aspire to; in particular as a female athlete in a male-dominated society.

Fast forward to the 2016 Olympic games. Tell the readers where you'd like Running Across Borders to be.

On the podium! We’ll have athletes from across the world competing and I hope we’ll be recognised for identifying the capacity of sport to make a difference in people’s lives and communities. We want to encourage athletes to become role models and inspire young people across Africa and beyond to dream about what it is possible to achieve. I really hope we can bring together gold medals and an excellence in supporting elite athletes with a real commitment to the power of sport to shape people’s aspiration and ambition from the grassroot level upwards. We just started to work with a UK steeplechase athlete Rob Mullet who ran for Team GB in the Euro Championships - someone to watch for Rio.

A project in Bekoji supporting grassroot runners as part of the outreach and legacy of a major film documentary, 'Town of Runners". For more, visit townofrunners.com