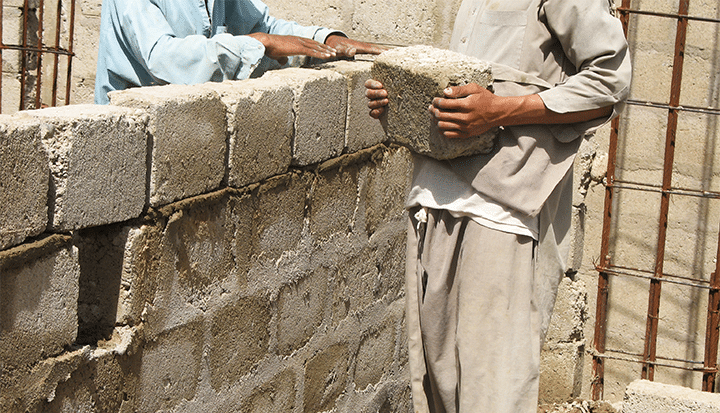 “I visited a Lendwithcare branch located in Kasur, a small town near Lahore, where a lot of people live below the poverty line but are very hard-working and enterprising. Most of them are engaged in the manufacturing business. Some of them are cobblers, weavers and yarn extractors, and others are traditional embroiders, known locally as silma sitara.

Moving through the small streets, my first visit was to the energetic and very passionate family of Shahnaz Mushtaq. Even just one year ago, their life was full of misery. They had a power loom business, but everything was burnt down due to an electricity short circuit. After this terrible misfortune, Shahnaz started extracting yarn while her husband started working at a power loom as a labourer. However, it was the 25,000 rupee loan that they received from Akhuwat that changed their lives again. They bought sweaters in bulk and because they could now pay in cash, they saved between 8,000-10,000 rupees (about £53 - £67). Shahnaz’s husband left his job and started working with her. The business was so successful that after 7 or 8 months, they hired an employee, and pay him 10,000-12,000 rupees (about £67 - £80) per month. Shahnaz now oversees the complete process: buying the sweaters, extracting the yarn, colouring the yarn and weaving the fabric. They weave fabric for traditional plain blankets and earn on average 25,000-30,000 rupees (about £168 - £201) profit per month. They sell the fabric to shopkeepers in Kasur and Lahore, as well as to local people.

My next visit was to another hardworking entrepreneur named Rasheed Ahmed, who recycles small pieces of fabric to make rough cotton, which is used by carpenters to make sofas. He also makes fine cotton which is used by his customers to make pillows. He used to have a well-run business with three employees. One day he faced a heavy loss due to a lack of orders and his business almost shut down. But through his effort and hard work, Rasheed was able to hire one specialist worker again. His monthly income now exceeds 20,000 rupees (about £134) per month, and his employee earns 500 rupees a day. It was a very positive experience for me to meet another successful beneficiary of Lendwithcare.

Going through the narrow lanes of Kasur, I met Nasreen Bibi who is another success story of interest-free loans. She is a traditional embroider, which is known locally as silma sitara. The interest-free loan has not only helped in increasing her own income but has also helped provide work to four families living in a village near Kasur. Nasreen Bibi now receives orders from Sialkot and Lahore to craft fancy clothes, and she manages to create over 20 bridal and party outfits every month. With the loan she received from Akhuwat and Lendwithcare, she purchased three wooden tables as well as fancy materials and fabric. Her business earnings are almost 25,000 rupees (about £168) per month now.

A small loan of £130 may not seem much to people in London, New York, Paris or even the rich of Lahore, but it can really change the lives of the poor here in Pakistan. It enables people to live a happier life, not having to worry and struggle for survival every day. After spending some time with these inspiring entrepreneurs, I feel highly motivated to keep working hard so that more people like Shahnaz, Rasheed and Nasreen can benefit from the interest-free loans given by Akhuwat, Care International and the Lendwithcare lenders.”