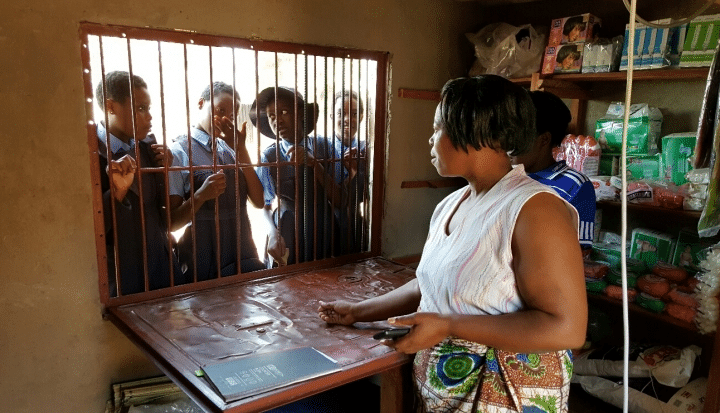 
Lendwithcare began supporting entrepreneurs in Zimbabwe, through Microfinance Institution Thrive, one year ago. I was able to visit the country recently and met some of the entrepreneurs that I - and 80 of you - had supported in June 2016. I met the Nokutenda group which comprises four women entrepreneurs all running different businesses. By being part of a group they are able to support each other with practical advice and friendship.

I met three of them and showed them how Lendwithcare works. I was able to show them their profile on the Lendwithcare website, under “My Loans”, and show them all of the lenders who had contributed to their loan.

Selina has a shop. She used to rent a kiosk for 2 and a half years but now she’s built one in her own front garden, so for the last year there’s been no rent and no taxi to pay. It is a well-stocked shop and Selina said she has lots of local customers as there is no local supermarket as a competitor. So she has sales of approximately USD $100 a day of which maybe USD $10-15 is profit. (USD is the currency used in Zimbabwe) She says the income from her shop has made a real difference to her life. She’s been able to buy a modest home and rents out some of the rooms. She has five children. Two are at university and the others are at school. One is studying to be a lawyer. She is deservedly proud.

Nakirai also has a shop. She has recently managed to buy a small car that she sometimes hires out to taxi drivers for extra income. Nakirai has two children, five and thirteen years old. Her income helps her to pay their levy for school. In addition, Nakirai has enhanced her house and is able to provide for all her family needs.

Nakirai is working with another group member, Tendai Mushamba, on a new business to recycle plastic bags from local factories. They have to buy the ‘waste’ bags because their value is now understood by everyone. Nakirai pays 25c per 1kg of used plastic bags. She and an employee clean the bags. Then she takes them to her colleague who seems to have rented a machine, from a local plastic factory, which turns the waste plastic into small chips. This costs about another 20c per kilo. Plus they have some transport costs of around 5c a kilo. They then sell the plastic chips for 80c per kilo to the plastic factory, who turns them into various plastic products, including the kind of PVC piping we saw being used in a small dam in Chivi District to take water from the dam to the market garden.

I explained to Nakirai that Lendwithcare recycles loans the same way her business is recycling plastic. As you know, Lendwithcare has now made over £11m of loans, which has been recycled from £4.5m of original money added.

If you would like to support an entrepreneur and help them work their way out of poverty you will find a wide range of people who are need a loan to support their small business here.