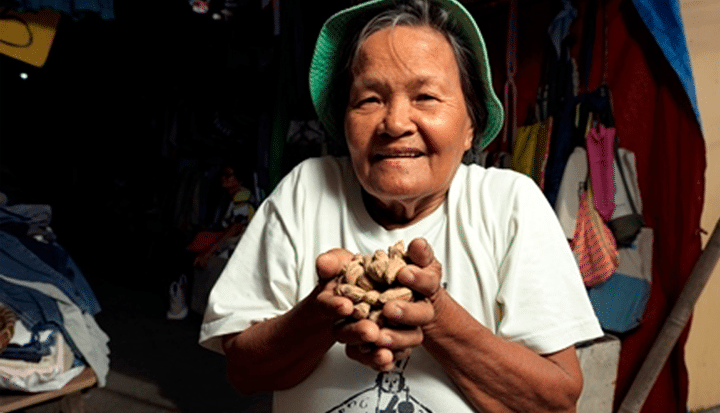 
The Philippines ranks third in the list of countries in the world where a natural disaster is most likely to occur, after the Pacific islands of Vanuatu and Tonga. Although it is also prone to earthquakes, flooding and droughts, it is typhoons that strike the Philippines most frequently. The state weather bureau PAGASA estimates that, on average, eight or nine typhoons or tropical storms make landfall in the Philippines each year, with another nine or ten entering Philippine waters.

The most devastating typhoon in recent years was the category five Super Typhoon Haiyan (known locally as Yolanda), which struck in November 2013. With winds of almost 200 miles per hour it was one of the strongest typhoons ever to hit land. More than 6,300 people lost their lives, and 4.1 million lost their homes. In total 16 million people were affected – about 14 per cent of the country’s population.

An estimated 91 per cent of all registered businesses in the Philippines are defined as ‘microenterprises’ (employing between one - nine people). These are considered the most vulnerable and least well prepared to deal with the devastating effects of typhoons. As climate change increases the frequency and severity of weather-related disasters around the globe, how might microfinance institutions support small businesses to prepare, cope and recover from such events? An insight into the operations of one organisation in the Philippines helps explain.

Since 2010 Lendwithcare has partnered with Lamac Multi-Purpose Co-operative (LMPC) to provide loans to microentrepreneurs in the Visayas region. LMPC was formed in 1973 by a group of 70 farmers with pooled savings of just US$70. It now boasts a membership of almost 70,000 and an outstanding loans portfolio of more than US$20 million.

When I visited the Philippines a few weeks ago, I spoke with Maria Elena Limocon, the General Manager of LPMC. She explained that although they can never fully protect themselves from the havoc wrought by typhoons as powerful as Haiyan, the co-operative, building on the physical proximity, trust and regular contact it has with members, had instigated a number of measures to support economic recovery and promote the resilience of their members to natural disasters.

As a priority the cooperative encourages its members to save, even in small amounts, for highly likely emergencies such as an illness in the family. It also means that members have money to buy what they need following natural disasters. LMPC created a Disaster Risk and Reduction Unit, which provides training and information for members on how to better prepare for and cope with events such as typhoons. This includes building strong shelters and ensuring that households have access to sufficient clean water, food and medical supplies.

Moreover, it raises awareness of how to prevent illnesses such as malaria or cholera, which may increase following a natural disaster, and also provides training to both staff and members in first aid. In the immediate aftermath of a typhoon, LMPC deploys staff to deliver emergency rations of rice, water, bread and medicine, as well as construction materials for shelter.

LMPC helps members to cope with the financial impact of natural disasters by providing emergency loans and offering a moratorium on existing loans in affected areas. When businesses have been greatly impacted it restructures loans, providing members with extra time to repay at no extra cost, and in the most severe cases when the livelihoods of members have been completely destroyed, it writes off the loans altogether.

Furthermore, it insures all agricultural borrowing with the Philippine Crop Insurance Corporation, which protects farmers against damage from natural disasters. More generally, LMPC encourages members to diversify their sources of income by engaging in several income-generating activities rather than specialising in a single trade.

This combination of measures supports the cooperative’s members to better cope with the effects of natural disasters and Maria Elena Limocon contrasts the current state of preparedness with previous post-disaster situations when members sometimes resorted to reducing consumption, selling assets and even migrating to search for work elsewhere.