Not Just a Women's Issue 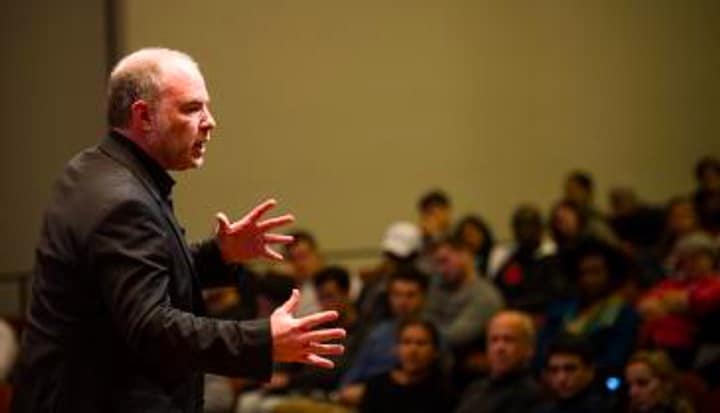 What are some of the causes and consequences of violence against women? What role do men play? How can men unite to ensure the world is safer for everyone: women and girls, men and boys? Dr. Jackson Katz emphasizes how violent behaviour is tied to prevailing definitions of manhood and how movements to end gender inequality and violence against women benefit everyone, men and women alike.


What are some of the causes and consequences of violence against women? What role do men play? How can men unite to ensure the world is safer for everyone: women and girls, men and boys? In the inaugural presentation of the Clayman Institute’s 18-month symposium on breaking the culture of sexual assault, noted educator, author and leading anti-sexual assault activist Dr. Jackson Katz delivered a passionate and energetic talk emphasizing how violent behavior is tied to prevailing definitions of manhood and how movements to end gender inequality and violence against women benefit everyone, men and women alike.

Not just a “women’s issue”

The culture of male violence and misogyny affects everyone, says Katz, not just women. “Domestic violence and sexual abuse are often called ‘women’s issues,’” he explains. But these are inherently men’s issues. The assumption that gender violence is a women’s issue, “gives men an excuse not to pay attention.” When we interpret “gender” to mean just women, we focus on the women, who are most often the victims, when we should focus on the men, who are most often the perpetrators. Why we don’t analyze the actions of perpetrators as closely as we do victims has its roots in part in how society views dominant groups.

Dominant groups are rarely challenged to think about their dominance or to explain themselves, Katz says. They remain unexamined, invisible. In the case of violence against women, men—the dominant group—have therefore been erased from the conversation on an issue that is mainly about them. Victim-blaming is also pervasive, blaming the person to whom something was done rather than the person who did it. According to Katz, our whole cognitive structure is set up to focus on the victim rather than the perpetrator. Yet, men's violent behavior affects both men and women. While its victims are predominantly women, it affects other men, women and children directly or indirectly as well. The same system that produces men who violate women also produces men who violate other men, says Katz. And the men who are perpetrators have often been victims themselves.

Men must be part of the solution

Our society and the institutions that foster a culture of men’s violence generate perpetrators at what Katz calls “pandemic rates.” Although individuals must be held responsible for their actions, it is important not to individualize the problem. Men’s violence is largely shaped by a culture that produces perpetrators and fails to adequately address the problem or punish those who should be held responsible. Katz argues that it is important to take a hard look at the institutions that help produce this culture, and understand how the media, sports, fraternities, military, pornography and other elements of society intersect to perpetuate it. If we’re solely focused on women, says Katz, we’ll never make any progress.

How do we stop this cycle of violence? Katz urges men to get involved. Men should join him in examining the meanings of masculinity and the types of masculinity we glorify and endorse in our culture. Ultimately, we need to change how masculinity and manhood are defined, and expand our understandings of masculinity to include a wider variety of acceptable behaviors and attributes. We must also shift the conversation about preventing sexual assault from how women should change their behavior/act differently, to how men should change their behavior/act differently. This includes men who are not necessarily perpetrators of assault, but are part of the dominant culture.

Adult men with power need to be true leaders

"Sexual assault is a leadership issue," says Katz. We need more adult men at all levels of institutional authority and power to demonstrate real leadership by challenging the culture of sexual assault, despite constraints or peer pressures. Katz works frequently with the military, fraternities and sports associations—groups that research shows tend to perpetuate narrow forms of masculinity. His program targets male athletes in particular because athletes should be able to capitalize on the leadership and teamwork qualities developed through sports to serve as role models for ending sexual violence. When a professional coach or high profile male in a position of authority makes a sexist comment, he notes, it gets widespread coverage in the media, further aggravating the problem as so many people look up to these men as role models.

Working together to break the culture

Katz advocates what he calls a “bystander approach,” but one where bystanders, as witnesses, must become involved. Silence can be a form of consent or complicity. Bystanders, who are neither perpetrators nor victims, must not remain silent in the face of abuse. Men who are not abusive, for example, must challenge men who are and call out harassment, degrading language and abusive behavior when they happen. We must create a culture where violence and abuse are unacceptable, causing men who act in sexist and harassing ways to lose peer status because of their behavior.

While Katz notes that many men do care deeply, he encourages even more men to demonstrate courage, strength and moral integrity by standing with women. We owe it not only to women, but also to our sons and daughters, he reminds us. We have an opportunity and responsibility to be leaders of change. Working together, we can and must do better.

This article was previously published on the Stanford University website and is reproduced with permission.