No Time to Waste: The Plastic Crisis and the World’s Poorest 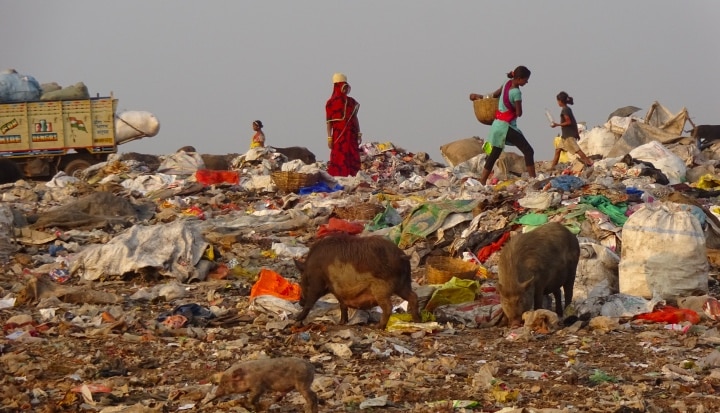 
Crisis, breakdown, emergency – however you talk about it, the environment is high on media and political agendas across the world. A new cross-organisational report, No Time to Waste: Tackling the plastics pollution crisis before it’s too late, calculates that between 400,000 and 1 million people die each year in developing countries because of diseases related to mismanaged plastic waste.

But what can governments, businesses, NGOs and citizens do to tackle it?  One key way is to move from our current “throwaway” economy to a more circular one, and there’s growing evidence from across the world about how this might work in practice.

Why we need to stop our make, use and waste economy

Our current “take, make and waste” economy is damaging our planet and our lives, and is unsustainable.

Globally, an estimated 8-12.7 million tonnes of plastic now enters the oceans every year. The link between plastics and climate change is also becoming increasingly clear, with the production and incineration of plastic in 2019 alone estimated to add more than 850 million metric tons of greenhouse gases to the atmosphere (equal to the pollution from 189 new 500-megawatt coal-fired power plants).

The plastic waste crisis has been caused by the growth in the production and consumption of products with cheap single-use plastic packaging, and too little is being done by the multinational companies who produce the goods to collect and sustainably manage the waste they have created.

The situation in developing countries is particularly critical as more than two billion people lack adequate waste management facilities and infrastructure, so, as with climate change, it is the poorest and most marginalised who are most severely affected.

The situation has worsened in many developing countries over the past year. After China banned imports of most plastic waste in 2018, other Asian countries have received a huge influx of contaminated and mixed plastic waste imports that are difficult or even impossible to recycle.

The recent changes to the Basel Convention regarding waste exports, which provide countries with the ability to reject the importation of unwanted or unmanageable plastic waste, gives strong momentum to the search for sustainable solutions to the problem of plastic waste.

The “circular economy” is an economic model that minimises waste and generates new value.  It addresses the root causes of global challenges, such as marine plastics pollution, climate change and biodiversity loss in a way that initiatives relying solely on consumers to change their behaviour do not.

One such example of an approach that can underpin a circular economy are extended producer responsibility (EPR) schemes, which require manufacturers and retailers to pay for the costs of managing their products at the end of their lives.  They offer a mechanism through which waste can be effectively managed and companies can be encouraged to audit their supply chains, so they know where their plastic is coming from and where it is potentially polluting the environment.

Policies which promote plastic waste valorisation also have positive social implications for inclusion and job creation in countries that already have extensive informal waste-picking and recycling sectors. While waste pickers around the world continue to work in precarious situations, a significant body of evidence and real-world examples have demonstrated the benefits of the informal sector and community-based recycling in closing the plastic waste management cycle.

International collaboration to advance the circular economy in developing countries

So far, insufficient attention has been paid to the circular economy in developing countries, despite considerable innovation and policy progress. A new Chatham House report highlights how developing economies can use the circular economy as an alternative strategy for industrial development and job creation to traditional manufacturing.

This can be a win-win for sustainable growth in developing countries and the rest of the world. It can help meet rising consumer demand, create jobs and protect the environment. But tapping into these opportunities will require significant changes in behaviour and decision making, particularly in the case of developed country governments, the financial sector and large multinationals that have enabled and incentivised unsustainable models of development.

The circular economy offers solutions to achieving sustainable employment, health, urbanisation and green industrialisation. Moving away from the “take, make and waste” model is possible. It will require a shift in entrenched behaviours and attitudes, but the alternative is irreversible damage to our planet. There is no time to waste.

Dr Schröder is a research fellow at the Institute for Development Studies. His main research interests relate to the transition to a circular economy within the context of sustainable consumption and production systems and the SDGs.