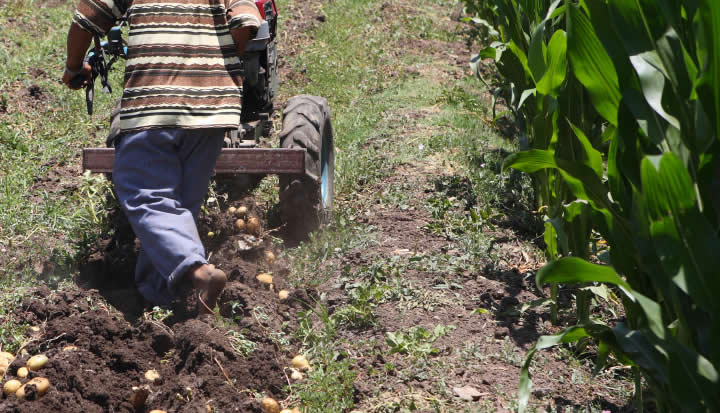 
Global discussions on agriculture policy can be a complex maze for organisations to navigate with emphasis shifting between a range of development priorities – from greater productivity and improved market access to climate change mitigation/adaptation and protection of land, air, water and biodiversity resources.

Is there a system which helps us to find the synergies and manage the trade-offs that can arise between these various priorities?

A new report released on 18 April by the Montpellier Panel – entitled Sustainable Intensification: A New Paradigm for African Agriculture – aims to address this very question. Comprised of a group of eminent African and European experts in the fields of agriculture, sustainable development, trade and policy, the Montpellier Panel has revisited the underlying technical and socioeconomic principles originally intended by the term “sustainable intensification” when it was first coined by Jules Pretty in 1997. The hope is to depoliticise a term which has become overly politicised and incorrectly defined as a “Trojan horse” for big, industrial agriculture.

Over the past fifty years, the global community has witnessed an agricultural ‘Green Revolution’ across many regions of the world. This intensification process has seen food production increase exponentially – feeding billions of additional people around the world – typically in step with a significant increase of external inputs such as fertilisers, among the biggest emitters of agricultural greenhouse gases.

Yet African agriculture has followed a vastly different trajectory. African crop yields have been largely stagnant over the past 50 years. Less than 4% of African farmland is irrigated. An estimated 75% of African soils are classified as degraded by the United Nations after years of repeated harvesting without replacing nutrients. Fertiliser use is by far the lowest in the world – often because it is too expensive or because poor infrastructure prevents many farmers from accessing it. Yet, the carbon footprint of African smallholder farmers is low, and problems of eutrophication and other forms of agricultural pollution are less prevalent than elsewhere in the world.

A similar disconnect occurs around the issue of waste. As a percentage of developed world incomes, food has continued to become less expensive throughout our lifetimes, while, at the same time, our consumer food waste is also reaching all-time highs, estimated at nearly 50% in the west.

In contrast, African food waste happens largely as “post-harvest” losses due to poor storage facilities and lack of transport options – with pests and diseases destroying an estimated 5-30% of farmers’ hard work and preventing them from selling surplus crop or better feeding themselves and their families as a result.

Surely we can learn from the imbalances in both systems of agriculture and find an appropriate middle ground, which maximises the many benefits of intensification while simultaneously minimising any unintended or undesirable consequences over the short and long term.

Sustainable intensification can be relevant and beneficial as a prevailing paradigm for smallholder African farmers, prioritising equally the concurrent needs to boost productivity and profitability while promoting equitable access to resources and sound environmental management. It must also be contextualised by local conditions – both agronomic and socioeconomic – to ensure appropriate and successful uptake by farmers.

But technological measures such as microdosing are only part of the answer. They must be coupled with the development of an enabling environment which assists farmers in accessing and managing knowledge, credit, land tenure and markets. Farmers’ cooperative associations are a case in point, assisting smallholder producers to access markets, offering them better quality storage and processing facilities and increasing farmers’ bargaining power. For example, Faso Jigi was set up in Mali in 1995 with the aim of assisting smallholder producers of cereals and shallots in marketing their products. Since its establishment, over 5,000 farmers in 134 cooperatives have become involved.

As Africa looks to continue the growth in the agricultural sector witnessed by many countries in the last decade, they have a lot of challenges to overcome: climate change, resource scarcity and poverty to name a few. But there is also vast potential: untapped water resources, a healthy rural labour market, a growing youth population and an increasing demand from population growth in cities.

Sustainable intensification – practiced honestly and holistically – can ensure these potentials are realised while at the same time the challenges are tackled head on.