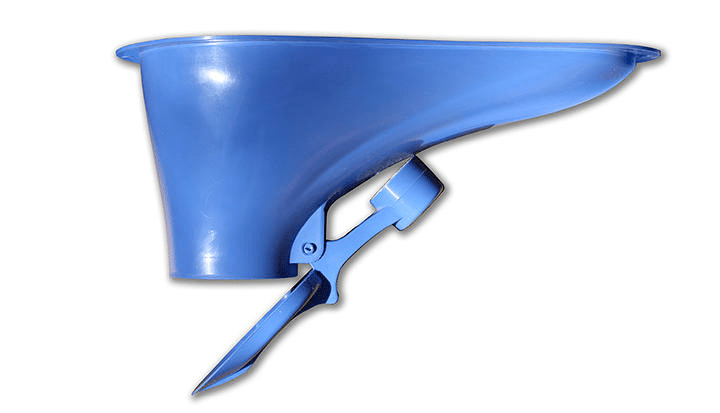 
This is the story of a successful partnership between two organizations that share a passion for toilets: an NGO with 30+ years of making markets work for the poor and the largest toilet manufacturer in North America. Eventually, they made more impact together than either organization could make alone.

The idea of a partnership started back in 2011 at a water and sanitation conference in Delhi. Cordell Jacks, the co-director of iDE’s Global WASH Initiative, and Jim McHale, VP, Research, Development, & Engineering for American Standard, met for coffee. It didn’t take long before Cordell and Jim realized that they had the makings of a perfect partnership.

Together they had the right combination of skills and knowledge to make a difference for the 2.5 billion people who live without improved sanitation in developing countries.

Cordell remembers the potential of the partnership: “American Standard and iDE are two organizations with complimentary skill sets. Both are dedicated to increasing and improving sanitation globally. Together, we demonstrated that there is a sustainable and profitable business model in the heart of one of the most challenging market conditions in the world. It is an amazing example of impact that can be had with innovative public private partnerships.”

American Standard saw a whole new market in the 2.5 billion people who are typically overlooked by big business. Too many corporations assume the poor have no purchasing power. But the most forward-thinking brands, like American Standard, are starting to take notice of the enormous potential in the bottom of the pyramid (BoP) customers. With a grant from the Bill & Melinda Gates Foundation, American Standard accepted the challenge to create a new latrine product for poor people in Bangladesh.

A local understanding from iDE

As far back as 1982, Paul Polak, iDE’s founder, walked and talked with small farmers in their one-acre fields. He spoke with them about their challenges and their dreams. iDE is still inspired by Paul’s approach of asking questions first. Today, iDE practices human-centered design (HCD), a methodology that identifies solutions to various challenges by placing users at the center of the design process.

In 2012, iDE led American Standard through the human-centered design process in Bangladesh. iDE was working under a grant from the Swiss Agency for Development and Cooperation (SDC) and the Water and Sanitation Program of the World Bank (WSP) to implement the "SanMark Pilot project in Bangladesh."

Tamara Baker, co-director of iDE’s Global WASH Initiative, recalled, “We opened new doors and ways of thinking for each other.” Together they spoke with small producers, salespeople, customers, and merchants. They field-tested prototypes, gathered customer feedback and ideated on product design. They also understood the potential market dynamics that could be strengthened to form a sustainable business model.

American Standard joined iDE in Bangladesh for a deep dive to ensure their solutions would be feasible, desirable and affordable. The designer from American Standard, Daigo Ishiyama, provided the big “a-ha.” He noticed something only a fluid-dynamic engineer would notice. Previous latrine products use too much water. Meanwhile, Bangladeshi are accustomed to carrying a very small amount of water into the latrine. When you have less water, you need a smaller trap. The confined space creates a whirlpool effect and provides the needed flush power.

Then, American Standard created an ingenious counterweight trapdoor solution that effectively sealed off the feces from the open air. And, of equal importance, the trap hid the feces from view of the user. Customer feedback revealed that people didn’t know it was possible to not have to see feces when inside a latrine. They were thrilled! The resulting product was named the SaTo pan (pronounced SAH-toh, derived from “Safe Toilet”).

The American Standard team also provided plastics knowledge, the ability to rapidly prototype in plastic, as well as the financial resources and influence to support iDE's longer-term engagement with domestic plastics manufacturer RFL Plastics Ltd. “Thanks to our partnership, we suddenly saw plastic as a very interesting material for scalable, sustainable products for improved sanitation,” said Conor Riggs, Technical Director – Programs at iDE Bangladesh. “It was the spark that led to other innovations in our program, particularly the development of a fully upgradeable, mass-producible latrine system that includes the SaTo Pan that will go to market in the fall of 2014.”

The case for the BoP

BoP business models can and do work. iDE staff see it daily. iDE operates programs in 11 countries across Africa, Asia, and Central America, that are laying the groundwork for corporations to enter this new frontier. iDE asks private enterprises to think beyond charity. A sustainable business model benefits both the private corporation and the people they serve. Armed with the right insights, private corporations can make an impact and make a profit. These are some of the foundational principles of iDE, which emanate from its founder, Paul Polak.

Paul recently expressed his approval of the collaboration that led to the SaTo pan: "Since poor sanitation is a key source of illness in developing countries, I am delighted to hear that iDE has collaborated with American Standard, the biggest toilet manufacturer in North America, to produce and start to distribute a radically affordable product to prevent the spread of diarrheal disease. I am particularly impressed with the price of $1.50, which could make it accessible to millions of people. It is simple, affordable devices like this that make the biggest impact."

There is still a lot of convincing to do out there. American Standard is a pioneer. Their next horizon? Zambia—where they know it’s not a question of “if” the markets will be profitable, it’s only a question of “who” and “when.”