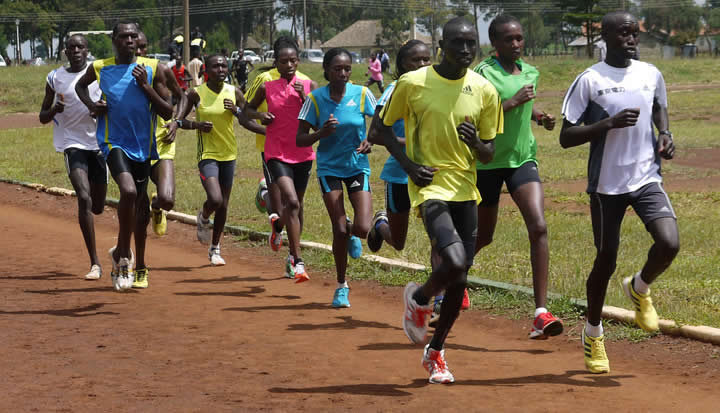 Wilson Kiriungi is the Founder and CEO of RUN with KENYANS. I first began talking with Wilson about 2-years ago, when both of our organizations launched. We’ve shared our vision for the future of Kenya, fantastic conversations and some beers. There is no one who I’ve encountered that is more passionate about employing the story of Kenyan runners to promote economic development in Kenya.

Explain the vision and motivation behind Run With Kenyans?

Kenya has established herself as a middle and long distance powerhouse. The idea behind RUN with KENYANS is to leverage the incredible power of Kenyan athletics to promote a broader Kenyan agenda. I see "Kenya" as a brand name, even bigger than Nike or Adidas, when it comes to running. I started in Boston by selling "Kenya Run?" t-shirts during Boston Marathon. I noticed that they were selling very well. So I made the leap into selling "bigger" things. How about promoting Kenya's trade, tourism, and culture around athletics? We tried it at the Boston Marathon Health and Fitness Expo in 2011 and it worked pretty well.

Tell us about the operations of Run With Kenyans?

RUN with KENYANS hosts people interested in exploring the running culture for running safaris in Kenya. We do not promise you that a few weeks in Kenya at altitude and training with some of the best runners in the world will make you hit your PR (personal record). But we guarantee an experience of a lifetime for anyone interested in immersing themselves into the Kenyan running culture. You will interact with do runs with big-name runners and get to see how they live and train.

RUN with KENYANS also takes part in marathon exhibitions to promote the running safaris. We also invite organizations interested in aligning themselves with the brand "Kenya" to our booth. In the past we've had Kenya Tourist Board, Western Union, and the Kenya Wildlife Service at our exhibition. In the future, we will host seminars and appearances by experts and authors to discuss running in Kenya. There's a lot of fascination and unanswered questions as to why Kenyans dominate long distance running so much.

We host special receptions for Kenyan runners when they travel abroad, especially in big marathons such as Boston, New York, and Chicago. These receptions are open to the public and offer regular people a chance to interact with the champions only a few days before a race. It's also an opportunity for people to savor "ugali" the famed carbohydrate-rich meal that Kenyan runners fuel with before races.

How can running be used to create economic development in Kenya?

First - Running can be used to invigorate business already in existence by opening up markets abroad. Kenya produces a lot of coffee, tea, rose flowers and other cash crops. By vendors exhibiting with us during marathon expos, they will be marketing to an audience that's already primed to appreciate "Kenya" through the runners.

Second - Kenya can and should position herself as the running capital of the world. RUN with KENYANS, in conjunction with operators of high altitude camps in Kenya, is already conducting very successful running safaris. A visit to Kenya could easily make it to the bucket list of every runner in the world. If running tourists begin to flock to Kenya, the spill-over effect will go beyond benefiting only those who directly deal with running.

Third -Kenya as a brand can create several running-related products that would surely find a ready market. Starting with apparel as Kourage Athletics is doing very successfully, to even special "eat like a Kenyan" diets.

What is your vision for the future of Kenya?

I would like to see Kenya become the capital of running with a major international marathon, a running hall of fame, and several running safari resorts. I would also like to see runners adopted as a national symbol. No Kenyan currency has a runner and neither does the Coat-of -arms.

How is business? What challenges do you face? What help do you need?

As with any start-up, the challenge we're facing at RUN with KENYANS is funding. Outreach to the running community is a full time job that also requires a lot of money for it to be effective.

To mark the London 2012 Olympics, we have teamed up with Kourage Athleticsto bring you a series of exciting blogs about the power of sport to fight poverty. Please share your own stories!