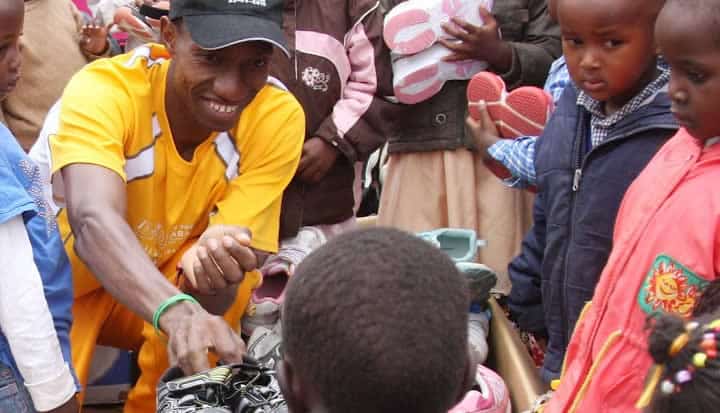 Douglas and I connected via mutual friends in the Kenyan running community. After exchanging calls and emails, I was on a plane to Las Vegas, Nevada where Douglas had recently relocated. We spent 15-hours together over a period of two-days. We ate incredible sushi together, which Douglas ordered in Japanese, and walked through the Nike store where a sales clerk had no idea he was talking to a world champion runner. Douglas is an inspiration to the Kenyan community and here is a brief interview with him.

Can you tell the readers a bit about yourself?

I am one of the pioneers of marathon running here in Kenya. I left for Japan in 1983, at 19 years old, where I spent 6-years under the watchful eye of Mr Nakamura Takao among others. As a result, my running accomplishments include:

- the first marathon Gold for Kenya in the 1987 World Championship in Rome, Italy,

- a Silver medal at the 1988 Olympics, the first Kenyan marathon medal,

- 1995 winning Gold in the World Cup marathon in Athens, Greece.

Personally I am passionate about running and music - as a composer and vocalist, in my small home studio. Some of my songs are in Japanese, a country I feel and greatly respect.

You are the founder of the Sotokoto Marathon, can you discuss its impact?

With Japan supplying the majority of the funding for the marathon, operating costs are injected into the Kenyan economy with local businesses benefiting by supplying tents, food, entertainment, printing etc.

Charity results from the marathon include the opening of the Kibera Sevens kids nursery school and Smiley Africa Shoes, which has donated over 4,000 shoes from Japan to Kibera residents.

Can you talk about the economic conditions of Kenya’s past champions?

Past Kenyan Olympians are living in poverty as we talk. Most of us are forgotten and stressed. The backside of Gold is the darkest future of an Olympian. With the Sotokoto marathon, I try to remember and recognize the Olympians, but much more help is needed.

What inspired you to create the Kibera Running Club?

During the first Sotokoto marathon, I sponsored 60 boys and girls to participate in the 4km race. Some perform very well and the parents were convinced that given a chance to train they could become champions. I heard their voice and the Kibera Running Club was born.

The goal of the club is to develop the work ethic of a child, so that even if she does not become a world champion, she will be better prepared for school and work. But there are huge challenges including facilities, equipment, basic need for kids, very poor environment, water and living conditions with serious infections.

What is your dream for Kenya?

My dream is to build an academy for all sportsmen and women, to inspire the youth, to bring pride to the present and recognize the past to keep the spirt burning.

To mark the London 2012 Olympics, we have teamed up with Kourage Athleticsto bring you a series of exciting blogs about the power of sport to fight poverty. Please share your own stories!