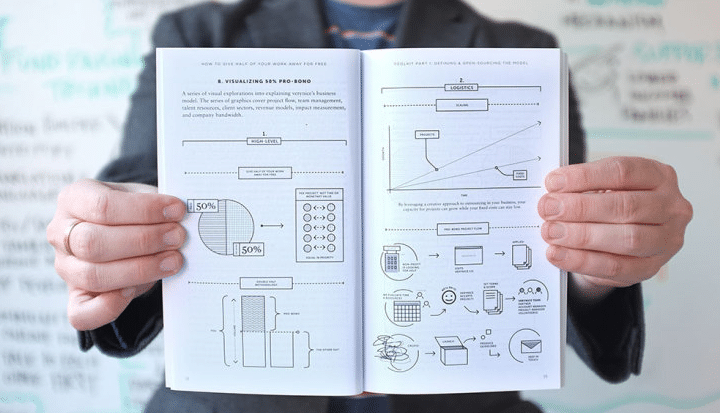 
that gives half of its work away for free.

Non-profit organizations are spending billions upon billions of dollars each year on fees billed by service-providers. While expenditures for services like marketing and design grow each year, funding declines. In fact, in 2013, there were 62 billion dollars in cuts from federal funding for non-profit organizations. When you compare this to foundation funding which, in 2012, came to a total of 46 billion dollars, it is clear that the social sector is becoming overwhelmingly drained of resources. Traditional means of philanthropy alone can no longer take the only supportive seat at the table.

When a non-profit is able to save valuable financial resources thanks to the generous pro-bono commitments of service-providers, they are able to immediately re-invest those dollars directly into their cause. Imagine what a spare 8 billion dollars could do? As business owners, freelancers, and entrepreneurs, we need to do our part to alleviate expenses for non-profit organizations by making giving back an integral component of our business model. A fast-growing business methodology that calls for giving half of your work away for free, known as “the double-half methodology” is one way to do that.

While the give half model’s roots are in pure altruism, as time went on, I began to realize the strategic benefits of giving work away for free. These incentives reside in three spaces: personal, educational, and professional.

1. Personal: Let’s face it. The excitement of spending your 9 to 5 creating marketing campaigns that have the sole purpose of helping some big corporation sell a few more bottles of soda wears off quickly. A major incentive of the model, one that is not necessarily measurable, is a contribution to your daily happiness. According to a study by Delivering Happiness At Work, 72% of Americans claim to be unhappy at work. No matter what you do, questions of your own meaning and contributions to the world at large can come about. The nice thing about this model is that you are constantly giving back to people that really deserve it, making you an instrumental piece in the puzzle of social impact.

2. Educational: Though it is not often brought up in client conversation, the reality behind helping someone out for free is that you get more creative/intellectual freedom that allows you to challenge yourself immensely. Often times when you are a hired professional you are not challenged. Instead, you are asked to deliver what the client knows you can do perfectly, every time. There is very little room for risky maneuvers, or dipping into completely new territories as a service provider. Pro-bono work, on the other hand, often lends itself well to openness for experimentation and risk.

3. Professional: Something that many people do not realize is that non-profit organizations and do-gooders at large are extremely well connected. These people are blowing up twitter and Facebook, and they have executives from billion dollar companies sitting on their boards. Furthermore, the majority of small non-profit organizations are comprised of a staff that is entirely there on a volunteer basis. This means they all have jobs elsewhere. All of these attributes of small non-profits lend themselves very well to the development of extremely viable and promising networking opportunities.

While this model was initially designed for small design practices and freelancers, it has since grown to other industries and scales of businesses. As verynice has flourished significantly in the past year (we now have 15 employees across 3 offices), this question has actually been at the top of our mind, and we have begun experimentation and research around best practices for integrating pro-bono work into larger businesses. In fact, over the past year, we have had the pleasure of advising Google and Johnson & Johnson on their own pro-bono initiatives as a way for us to think differently about our own.

Companies have given half through many strategies and avenues, regardless of size. This has included a combination of pro-bono models including traditional contract services as well as board service, general skills volunteering (mentorship programs, etc.), financial contributions, etc. Depending on the scale of your business, you may find it possible to reach the 50% balance through a unique combination of employee giving programs and pro-bono work. There have even been some instances of pro-bono work being done for small businesses as well as an attempt to save them resources which, in theory, can be used to create more jobs.

Thanks to activists like Aaron Hurst, the founder of the Taproot Foundation, as well as government programs like the Committee Encouraging Corporate Philanthropy (CECP), and the Billion+ Change campaign, pro-bono is now valued as a resource that extends across a diverse range of fields and industries from Human Resources to Business Management to Graphic Design, and more. Great strides have been made, especially in the past 5 years, by campaigns that call for at least a 1% ongoing commitment to pro-bono, or an annual weekend-long hackathon of sorts to promote the aid of non-profit organizations. Thanks to these initiatives, pro-bono is now a term that is in the vocabulary of many businesses, big and small.