Fashion: A Catalyst for Change 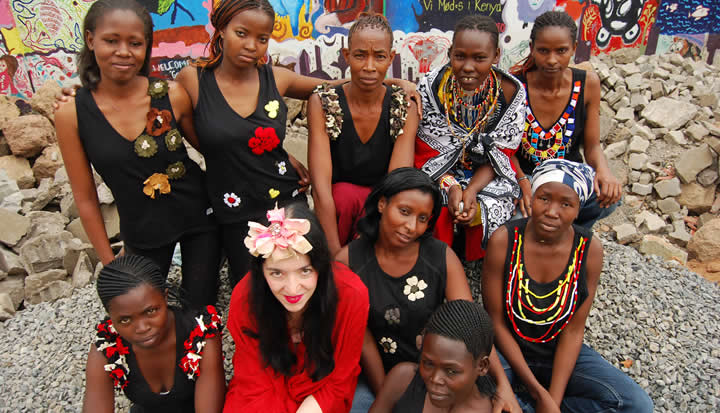 Fashion: A Catalyst for Change


The potential of the private sector to reduce poverty is well recognized; however, this has not been evident in the fashion industry. Fashion is one of the most globalized sectors, providing employment to more than 60 million people, mainly women and unskilled workers from poor economies. And it is expanding. According to Datamonitor, 2010, the textiles, apparel and luxury goods market was worth US$ 2,597.8 billion in 2010 and has grown by 4.2%, year on year, from 2006 to 2010.

Yet sweatshop production scandals brought into the public view are still frequent in the sector, with basic labour conditions unavailable to many workers, especially those from disadvantaged communities who have little awareness of their rights. Estimates by Lucy Siegel, an Ethical Living columnist at the Observer, in her 2011 book To Die For,suggests that 20% to 60% of garment production is done at home by informal workers.

A revolution in fashion has been building, with consumers questioning ethical issues such as labour practices and environmental impact. This has largely changed the attitudes within the sector and opened up opportunities for micro-manufacturers from developing countries. ITC’s Poor Communities and Trade Programme (PCTP) is taking advantage of this shift to introduce micro-manufacturers — mostly women — into international value chains.

From Kibera to Kensington

In its 2010 book Market Access, Transparency and Fairness in Global Trade: Export Impact for Good, ITC estimates that vast swathes of the global poor have been excluded from the benefits that trade holds. But technical assistance for marginalized communities is not enough. Targeted action in human development and empowerment are needed to overcome the many barriers that extreme poverty creates. This is exactly what the PCTP does: It brings together the poorest communities in the world to work alongside big names from the fashion industry. In doing so, it increases the volume of exports from the least developed countries, with particular attention given to marginalized communities.

The approach is not intended to boost demand for ‘ethnic fashion’, but rather to convert mainstream fashion into a more ethical endeavour. To achieve this, the programme partners with brands that have a high enough profile to influence the market, or large retailers that can disperse products and messages broadly. These partners recognize that customer loyalty is of the utmost importance in an industry faced with volatility and market saturation, and respect for people and the planet consistently rank at the top of the list to ensure this loyalty.

So far, the PCTP has enabled over 7,000 micro-manufacturers in East Africa to hold jobs that are remunerated fairly. The impact on the people has been substantial, with important improvements in housing, education, food security, access to medical care and water. One beneficiary, Mercy Waweru, has been able to buy a home as a result of the work orders generated by the programme in one year. Qualitative results have also been captured. Results from the social impact assessments have highlighted that 80%–90% of those involved feel empowered and have a stronger position in the decisionmaking process.

It is not just the African communities that are benefiting from this initiative, however. Private sector partners are also gaining, as the approach is entirely market-driven and linkages between the international market and micro-manufacturers are built on real trade relationships.

Initially, many companies were hesitant to manufacture their goods in Africa on a large scale. Yet the production of successful collections, sometimes made wholly in Africa, has attracted a steady flow of new buyers to the initiative. British designer Vivienne Westwood joined the programme in 2010 with a small collection of 950 bags, distributed by the online retailer yoox.com. Within weeks the items were sold out, and repeat orders were urgently placed. Westwood ordered 3500 bags for the second collection and the ‘Africa Bags’ featured in her Gold Label line during Paris Fashion Week, and the fifth collection is being developed in the Nairobi-based product development centre. As with Westwood, many designers and retailers have realized that responsible fashion can make them more competitive and enhance their brand image.

While the fashion industry will always find inspiration among Africa’s myriad cultures, materials and craftsmanship, a reliable and sustainable infrastructure for production and trade is required. To this end, the PCTP is supporting a new business infrastructure in Nairobi to coordinate production work in Africa. This infrastructure is based on a not-for-profit intermediary between the communities and the industry. Buyers develop products with the assistance of the PCTP, using capacities and materials available in communities. The profits from these business transactions are then reinvested in a social agenda, defined by the communities themselves and implemented through specialized NGOs.

This structure has been developed to enhance social responsibility. All the operations and production processes follow a rigorous agenda under the guidance of the Fair Labour Association, which guarantees that labour practices are fair, and that wages are well above the national minimum wage, typically at least double. Artisans are paid by the piece depending on their skill level, which generates an income of KSH 500 to KSH 1,000 (about US$ 5 to US$ 10) per day, well above the average pay for this type of work, which equates to about US$ 3.90 per day for casual workers, based on the Government of Kenya minimum wage (Legal notice No. 96 — 18th June 2010). Environmental issues hold a key place in this system of work: environmentally friendly processes are favoured, and the use of recycled, organic and locally sourced materials prevails.

Today, the PCTP has engaged a number of key players from the private sector, such as Vivienne Westwood, Stella McCartney, Carmina Campus, Coop Italia and Walmart. The work they carry out goes beyond the delocalization of their production lines; it generates high-quality fashion goods that are backed by a compelling social responsibility story.

This story first appeared in ITC's Trade Forum Magazine and is reproduced with permission.