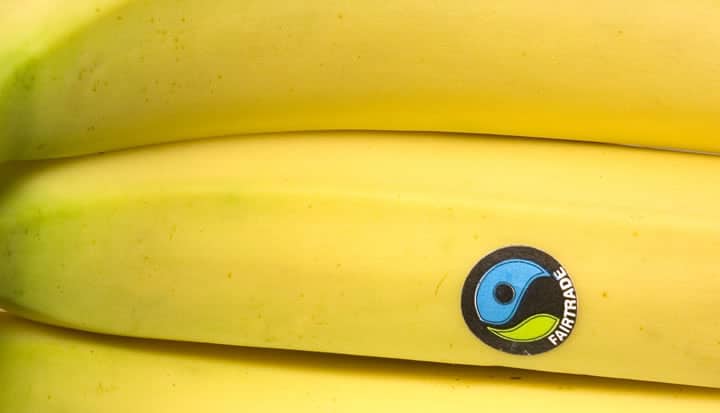 
The Fairtrade Foundation launched its first products – coffee, chocolate and tea – 20 years ago. As one of the Oxfam types who sat around in the late 80s debating whether UK supermarkets would ever stock ‘alternative trade’ products, this is a moment to savour.

We’ve come a long way. Sales in 2013 were £1.78 billion in the UK alone – half of the global total, and have kept growing despite the recession. 90% of UK consumers know and trust the FAIRTRADE Mark, and that familiarity underpins many of the subsequent trade justice campaigns on everything from ‘clean clothes’ to the WTO. 1.3 million small farmers and workers in 70 countries have seen positive impacts, from better incomes to stronger collective organisation and the social premium (£23 million from UK sales in 2013) has enabled investment in health, housing and education schemes. So there was a lot to celebrate during the recent Fairtrade Fortnight.

Bananas are one of the movement’s success stories, with a third of the UK market now Fairtrade, helped by 100% sourcing commitments from Sainsbury’s, The Co-op and Waitrose.

But all is not rosy for Fairtrade Foundation in the garden of supermarket supply chains, as its recent report on highlights. The retail price of loose bananas has nearly halved in the last 10 years in the UK (though curiously not in Germany, France or Italy). But the cost of production for farmers has doubled in some regions.The double whammy of depressed prices and increased costs is causing problems at both ends of this simple supply chain.

At the producer end, poverty is still the norm. In Ecuador only a quarter of households reliant on banana plantations earn an income above the poverty line. In Colombia many employers have responded to sustained pressure on prices by replacing permanent jobs with temporary ones, putting at risk Colombia’s proud model of mature industrial relations.

At the supermarket end, every retailer spoken to by the Foundation in researching the report talked of the competitive pressure to keep banana prices low (particularly since it is one of the items used to compare one another’s retail prices and communicate back to consumers). In a 2009 interview with The Grocer magazine the CEO of Waitrose suggested that the banana price war is costing it £100,000 per week, i.e. it was selling below cost.

How can this be healthy for sustainability – economic, environmental or social? Consumers have benefited – and given that UK poverty is increasing this matters – but the direction of travel is all wrong for those who care about trade justice. Even the poorest consumers do not want those who are poorer to be exploited; 84% of people say they would pay a few pence extra if they know it will reach farmers and workers. Just 1p on the retail price of a banana could lift incomes by 20-30%. Oxfam came to the same conclusion, in its Poverty Footprint study with IPL, which estimated that just 5p on a £4 bunch of flowers could raise Kenyan flower workers’ wages to a living wage.

Tesco – keen to change its image following the horsemeat scandal – has at least committed to pay at least the Fairtrade minimum price wherever they source, though not the licence fee that pays for the premium and other investment; it needs to keep step with Asda, which was first to drop banana prices in 2002 after it was taken over by Walmart.

As it looks to the next 20 years, Fairtrade faces another challenge: competition from other ethical and environmental labels (438 of them at the last count, many of which do not back up their claims). Fairtrade stands out for its payment of a guaranteed minimum price, an additional social premium and the inclusion of southern producers and trade unions in its governance. It has responded to concerns about low plantation wages (see previous blog on wages in the tea industry) by strengthening its standard for hired labour and initiating a living wage benchmarking process.

By comparison, Rainforest Alliance (a labelling initiative with an environmental focus that is taking market share from Fairtrade) pays no minimum price or social premium, does not give priority to small farmers and is pretty weak on workers’ rights, with no commitment to a living wage or effective grievance mechanisms. We welcome the fact that Rainforest Alliance is collaborating on a living wage benchmarking initiative, but without a commitment to this in their standard, how will its model enable higher wages to be paid? Yet another challenge is that retailers can’t talk about price as an issue for fear of falling foul of UK and EU competition law, which Ft teaprohibits agreements or practices that ‘directly or indirectly fix purchase or selling prices or any other trading conditions’.

Is this a trading and policy environment in which Fairtrade Foundation can flourish in the next 20 years? In such circumstances it is natural that the Foundation is debating changes to its system that would enable it to compete and grow sales in this tough environment. But what really needs to change is the goliath of a food system against which this ethical David is pitting itself, a system which is locked into a race to the bottom. We badly need retailers to be able to compete and cover the cost of sustainable production, so that the would-be good guys thrive.

Oxfam is on the case with its Behind the Brands campaign, in which the top 10 food and beverage companies are rated and ranked on seven issues vital to poverty alleviation. The transparent scorecard on which findings are based has attracted attention from activists and corporate investors alike, and galvanised corporate commitments on issues such as gender and land grabs that get left out of their CSR programmes.

Meanwhile the Foundation has published its own survey, rating supermarkets’ efforts to make bananas fair (researched by Ethical Consumer). I for one welcome the more assertive stance of the Foundation in taking this analysis public and spelling out the changes needed.

Of course there will be plenty of trade-offs and tensions as they do this, such as the difficulty of achieving both breadth of reach and depth of impact, and the difficulty of being radical enough for their activist supporters, while staying commercial enough for their multinational licensees. It’s not easy to meet expectations when your mission is ‘to improve the trading position of producer organisations in the South and to deliver sustainable livelihoods for farmers, workers and their communities’.

Surely it’s time – as the Foundation says – for some government intervention in the UK – to investigate the impact of banana pricing, to take action to make bananas fair, and to review whether competition law enables rights to be respected in the supply chain. Meanwhile retailers and traders should do their utmost to cover the cost of sustainable production and pay a living wage to workers.

Meanwhile, hats off to everyone involved and good luck for the next 20 years.

This blog was previously published on Oxfam's From Poverty to Power Blog and is reproduced here with permission.

2 responses to “Fairtrade: Celebrating the First 20 years. What’s Next?”