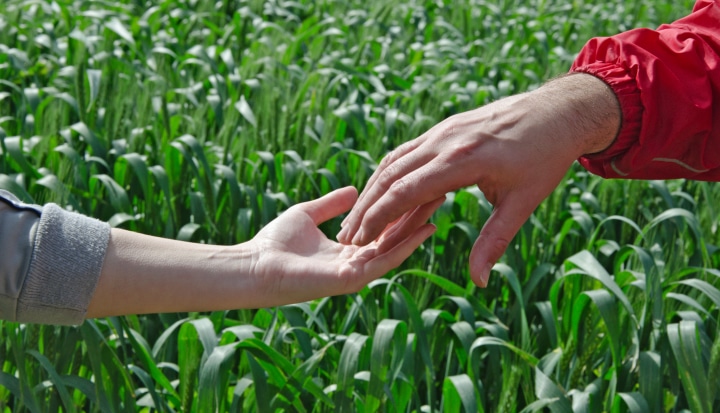 
A silo-buster is an innovator who refuses to allow a good idea to be pigeon-holed. Rather than being compartmentalized by the customary way of doing things, they break through corporate, academic, or societal categories, calling on a host of different disciplines and departments to take the next step.

But innovation is only a first step in creating a nutrient economy. Taking a global step forward requires collaboration.

A Deal with the Devil?

When the walls come down, collaboration can bring together strange bedfellows.

But silo-busting collaboration demands that we count no voice out, especially when big business has the infrastructure and financial capital to rocket good ideas forward. By itself, an exciting idea isn’t enough to spur corporate investment. In fact, a key challenge to successful collaboration for social entrepreneurs is bridging the gap between the private and citizen sectors.

A Whole Other Language

The answer is to build a hybrid value chain, a partnership that incentivizes both the social entrepreneur and the corporate leader. Each sector has something the other wants, and the trick is finding the collaborative balance.

Businesses have the ability to manufacture at a much greater scale, bolstered by their distribution channels, logistical capacities, and access to capital—whether it is financial or intellectual capital, or something more.

Social entrepreneurs, on the other hand, often have a deep, grassroots understanding of the work that needs to be done to address a problem, and of those who will be impacted. Social entrepreneurs can use that knowledge to earn the trust and respect of local populations that typically may be suspicious of corporations and their intentions.

“From the corporation point of view, [there is a need to] see how social impact can be ingrained in core business, as much as possible, so we can go beyond social responsibility, beyond philanthropy,” said Stephanie Schmidt of Ashoka France.

This speaks to the desire of businesses to build sustainable and scalable projects, rather than simply throwing money at a problem. Social entrepreneurs share this desire for projects that last and grow to create value for much larger populations, because they ultimately benefit, and attract, everyone.

Ashoka assembled more than 150 silo-busters—each an expert in their own field—at a Globalizer Summit in Frankfurt, Germany in early June. Every one of them was passionate about building a “Nutrients for All” world where the health and vitality of soil, plants, animals, and people are given new and greater value in the global arena.

One of the challenges they addressed is how to fortify food—a medium-term solution to malnutrition that can easily be scaled-up to serve large populations—and it provides an interesting case study of the collaboration needed to build a “nutrients for all” world.

Food fortification “is adding tiny amounts of key vitamins and minerals to staple foods that people consume on a daily basis, because micronutrients are often missing in diets of the poor, due to cost and lack of availability,” explained Rebecca Spohrer, an associate for large-scale food fortification at The Global Alliance for Improved Nutrition (GAIN).

What’s more, the success of food fortification stands to grow as associated metrics and technologies improve. There are five nutrients that are essential to human health: vitamin A, iodine, iron, folic acid, and zinc.

Measuring folic acid remains an elusive goal, but the other “big five” nutrients can be assessed, according to BioAnalyt, a company dedicating to developing methods to measure and analyze micronutrients. Discovering the levels of nutrients in people, and the food they eat, can go a long way toward figuring out how best to fortify foods, and attract investment to food fortification.

For example, Nestlé serves fortified food to more than 160 billion people in developing countries. Despite reaching such a large number of people, there are limits to what can be done, though the nature of these limits may surprise you.

Crops change in taste and appearance as they are fortified. Consumers may respond to these changes with hesitance and uncertainty, for understandable reasons.

Herein lies a problem: when a big corporation uses its size and resources to address a social need, this critical investment can go to waste if there is a lack of understanding and appreciation for consumer culture. Enter the social entrepreneur who has the opportunity to integrate these nutritious crops into the value chain by working at the grassroots level, securing a foothold for the nutrient economy—placing greater value on nutrients and health.

Breaking down unnecessary walls and silos creates a free exchange of ideas that can lead to new and exciting forms of collaboration. We each have our own strengths—doesn’t it make sense to combine them?

2 responses to “Innovation Through Collaboration”