‘Decent Work for All’: But How is This to Be Achieved? 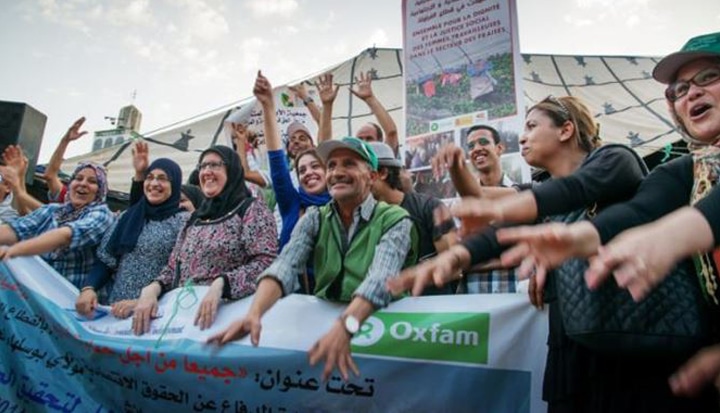 ‘Decent Work for All’: But How is This to Be Achieved?


Extreme poverty has been halved in the last 15 years, and with a concerted effort the next 15 could see it virtually eliminated from all but the most fragile states. The Sustainable Development Goals provide a vital framework for this effort. Goal 8 is to ‘Promote sustained, inclusive and sustainable economic growth, full and productive employment and decent work for all’.

Yet how is this going to be achieved? Oxfam has published four studies involving multi-national and local companies, and every one confirmed that wages, even where legal, are far below a living wage, such that hard work is not a route out of poverty even in profitable supply chains. These include a study in Morocco’s strawberry sector, with Ethical Trading Initiative [add link due shortly]; a study in the tea industry in three countries, with Ethical Tea Partnership; a study in Kenya’s horticulture sector, with IPL; and a study in Vietnam with Unilever. Precarious work is as great an issue as low wages, and women are further from ‘decent work’ than men everywhere.

Now a new report from the IMF shows the decline in unionisation in advanced economies has driven increased economic inequality. If workers here are losing the ability to negotiate a living wage, what are the chances for those in less developed countries to do so?

A living wage is vital for people to participate in social and cultural life and afford a basic lifestyle considered acceptable by society at its current level of development. When a government sets its minimum wage far below a living wage, it is engaging in a race to the bottom with competitor countries. When a profitable company does not pay a living wage, it is pushing onto the most vulnerable people in its supply chain the negative impact of its business model.

Some governments and companies, with active civil society involvement, are making progress despite these competitive headwinds.

Ecuador achieves a living wage goal: a ‘top down’ approach.

Major employers in the banana industry are reported to have welcomed a levelling-up of wages and labour standards. Nor has it harmed exports, which hit record levels in 2013 and 2014. A key catalyst for the changes made by the Ecuadorian government was its membership of the World Banana Forum’s ‘Working Group on the Distribution of Value’, according to NGO Banana Link in a new blog.

When Oxfam conducted a survey in Morocco’s strawberry sector in 2009, it found a range of concerns, linked to the control that male labour providers had over the female workforce. One worker was told “Do not ruin the strawberries; they are worth more than you are.” Oxfam worked with local NGOs to improve workers’ awareness of their rights, while joining forces with the Ethical Trading Initiative and its retail members, to collectively engage the Moroccan industry and government. A recent Oxfam study found that workers now refuse jobs on less than the minimum wage, and many more report having a contract and being able to claim social security.

But surely it should not take NGO pressure to tackle these issues. Over the next 15 years we need economic strategies to include measures for decent quality jobs, that move them to the sustainable end of a work spectrum. The spectrum covers illegal jobs, such as forced labour in cotton, seafood and palm oil; ones that are legal but are a poverty trap; jobs that are slowly improving; and ‘high road’ jobs – secure work on a living wage.

This will need to bring in the role of aid and of financing as well as changes in corporate practices. Oxfam’s Steps towards a living wage in global supply chains has been published to help with the latter. It calls for a more holistic approach involving better minimum wage setting processes, a fairer share of value in the value chain and the removal of barriers to collective bargaining.

One response to “‘Decent Work for All’: But How is This to Be Achieved?”