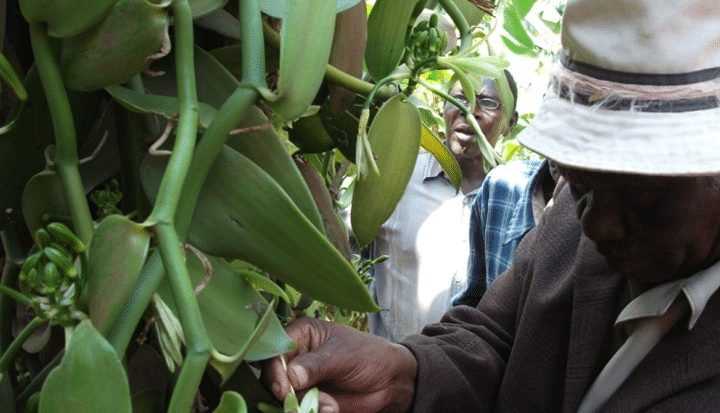 
Rashid is a farmer I met in the Marangu region around Kilimanjaro, like his father and grandfather as well as the thousands of other farmers in the region he farms coffee, bananas and a variety of other vegetables. With declining crop prices, the income he earns from these crops is negligible and most of his proceeds go towards feeding his family.

Not far away in the Mamba area I met another farmer, Elisael who began cultivating vanilla two years ago. Its taken time for his efforts to bare fruit but next year he expects that the 50 vines on his one acre plot will produce a total of 100Kg of vanilla pods which at a price of $2.8 per kg should generate for him around $280. While this represents only a modest sum by western standards, it is enough to allow him to pay his children’s annual school fees or save for family emergencies. What’s more, it requires only a minimal investment to cultivate the crop and it’s not at the expense of any of his staple crops since the vanilla is intercropped, and he makes use of under-developed shaded land.

Only 2 years ago Elisael was no different to Rashid, back then neither of them could have even contemplated vanilla cultivation as a possibility. They would have had no way of knowing that the “naturally-sourced” global market is estimated at $240 million or that there is a growing interest in all-natural, organic and ethically sourced products globally. They also would not have known that in East Africa alone the untapped natural vanilla flavour market is estimated to be around $1 million and is likely to grow rapidly with the rise of Africa’s emerging middle class, stimulating consumer demand for high-end products. Neither farmer would have had any idea of these trends, despite the potential to increase their income levels. Given their background and sources of information, this knowledge would have been completely unknown to them.

However nearby in the town of Moshi, a small father-son team saw the potential of this market. As a former Industrial Engineer and IADB expert , and computer engineer and McKinsey consultant, respectively, they certainly had the background and knowledge-base to recognize such a business opportunity. That is not to say they had all the answers, while they may have been able to crunch a few numbers, their “unknowns” where equally daunting; they knew little about traditional cultivation practices or how the sociological background of the farmers may effect their willingness and ability to grow this novel crop.

It is the intersection of these “knowns” and “unknowns” where according to the Kirznerian school of entrepreneurship the greatest entrepreneurial opportunities are discovered, as when these two knowledge systems collide, new entrepreneurial ventures form, creating value for society at large.

Natural Extracts Industries Ltd. (NEI) is an example of such a venture that builds upon the co-founders’ business acumen and technical expertise and combines it with the local knowledge and on-the-ground experience of their Tanzanian partner to create new opportunities and shared value for all stakeholders. Since the company’s establishment in 2011 they have been working with farmers like Elisael to cultivate vanilla and other crops that are used as raw materials for natural extracts, in order to satisfy world demand for natural flavors, while improving the livelihoods of small-scale farmers in the region. While still a young company, NEI is putting into practice many of the best practices that have proven successful in running a social enterprise sourcing from the BoP with much of its core business model dependent on these strategies.

On the supply side, NEI currently works with 1200 farmers in the Mount Kilimanjaro, Arusha and Morogoro regions who receive ongoing training and workshops to increase quality, yield and production. In addition to the technical training, the farmers receive specialized training in areas such as group governance, savings, HIV/AIDS awareness and good nutrition to increase the social impact on the farmers.

NEI employs a model where they identify early adopters or “Champions”, who are generally older, well respected members of the community who in addition to growing their own vines visit and advise other farmers in the region. This approach is supported by research from Agricultural Technology Adoption Initiative (ATAI), which demonstrates the important effect of beginning with influential leaders for ensuring uptake among the broader community. The company also works with local women’s groups where in addition to basic support in building trust and empowerment they are gradually introducing technical training on solar drying of raw materials necessary for NEI’s various other natural flavours such as mango and banana extracts. This provides additional income to supplement their livelihoods.

In terms of building the eco-system, NEI has established successful partnerships with USAID through the Tanzanian Agriculture Production Program (TAPP), who provide grants to subsidize the training of the farmers and subsidize the purchasing of the vanilla cuttings. This removes what would have been a significant barrier to entry and allows NEI to focus on the business side of getting their products to market.

NEI has set up a small factory near Kilimanjaro where they cure and process the vanilla centrally, thus ensuring a consistent quality product that adds value locally, creating additional jobs within Tanzania. They also address one of the greatest challenges to previous attempts to cultivate vanilla in the region, which failed because famers lacked an accessible market for their vanilla pods.

Finally, as leading BoP expert Ted London often reiterates one of the most important ingredients for success at the BoP is humility. NEI is continuously iterating and improving their business model, learning from everyone ranging from the small scale-farmers themselves to tapping into the various international support mechanisms available so as not to “re-invent the wheel”.

With successful cultivation underway, NEI’s next step is finding larger customers and the correct forums, distribution networks and retailers to get their products to market. They are looking for all potential customers interested in supporting this ambitious social enterprise by purchasing the all-natural, ethically sourced and high quality pods and extracts they produce. NEI welcomes feedback and interest from the Business Fights Poverty Community and is happy to share their own knowledge and experience with other aspiring social enterprises in this field. (Fore more information visit the Natural Extracts Industries Ltd. website.)