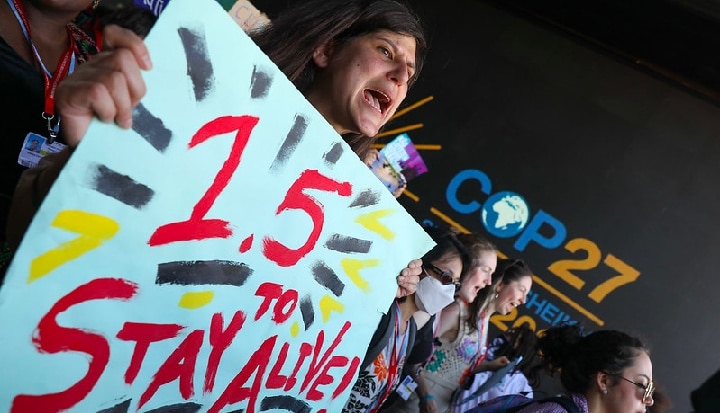 Protesters at the COP27 summit in Sharm-El-Sheikh, Egypt. No G7 country has a corporate sector that is on track to make reductions in emissions compatible with the 1.5C warming target (Picture: UNFCCC)

Companies in the richest countries have still not agreed to climate measures that are in line with staying below 1.5 degrees. Danielle Smith and Hilde Stroot welcome new guidance from a UN panel, released at COP27, to push action by firms on corporate net-zero plans – and set out five key ways in which its recommendations will lead to climate justice.

As UN Experts Call for an End to Greenwashing,

Companies in the richest countries have still not agreed to climate measures that are in line with staying below 1.5 degrees. Danielle Smith and Hilde Stroot welcome new guidance from a UN panel, released at COP27, to push action by firms on corporate net-zero plans – and set out five key ways in which its recommendations will lead to climate justice.

As business leaders join policy makers and activists at COP27, there is intense pressure on companies to play their part in tackling the climate emergency – yet they are still falling massively short. A recent report from the CDP which supports firms to measure environmental impact, found that, despite a rapid increase in companies committing to climate targets in 2021, not a single one of the G7 countries has a corporate sector that is on track to make reductions in emission compatible with the 1.5C warming target.

So it was a big and welcome moment last week at COP27, when the UN expert panel tasked with addressing net-zero commitments from corporations, launched a set of recommendations that set the bar for large corporations and other non-state actors towards net zero. The panel, the UN High-Level Expert Group on the Net-Zero Emissions Commitments of Non-State Entities (HLEG), was established in March 2022 following a growth in net-zero commitments from non-state actors, including companies. Its ambition to hold companies to higher standards was clear at its launch, where, the United Nations Secretary-General António Guterres stated “to avert a climate catastrophe, we need bold pledges but matched by concrete, measurable action.”

The panel’s new report aims to help corporations “bring integrity, transparency and accountability to net zero by establishing clear standards and criteria” in a world where, as it points out, two thirds of the largest listed companies do not yet have a net-zero commitment. It calls on firms to prioritise “urgent and deep reduction of emissions across their value chain”, be transparent about their commitments to do this, and report publicly on their progress. In this blog, we pick out five key things to celebrate in the new report.

1. AN END TO GREENWASHING

The report explicitly talks about drawing “a red line around greenwashing”. In fact, during the launch of the new recommendations, António Guterres called for “zero tolerance for net-zero greenwashing”. This echoes Oxfam’s own concerns in our Tightening the Net report, which warned that vague and poorly defined net zero targets could amount to little more than greenwash. In that report, we also highlighted other fears relating to net-zero commitments, including risks to land rights and food security where carbon removals (such as planting trees to offset emissions) are used to meet targets.

2. THE FOCUS MUST BE SLASHING EMISSIONS – AND SETTING TRANSPARENT GOALS TO CUT THEM FAST

In its report, the HLEG calls on non-state actors to reduce emissions as fast as possible and commit to short, medium and long term absolute emission reduction targets that are science-based and aligned with pathways that limit warming to 1.5C. Crucially, these targets must include all three categories of emissions from across a company’s value chain, including Scope 1 (direct emissions), 2 (indirect emissions from purchased energy) and 3 (indirect value chain emissions, you can find an explanation of the different emission categories here). Where Scope 3 emission data is missing, the recommendations expect companies to explain any estimates used, as well as efforts to fill any gaps.

To incentivise rapid action, targets should be linked with executive compensation, therefore ensuring accountability for climate action at the highest levels.

The report also stresses the importance of slashing emissions first and foremost. It says so-called high integrity carbon credits in voluntary markets can be used but should not be counted toward interim emissions reductions required by a company’s net-zero pathway.

If Special Envoy on Climate John Kerry takes the panel’s recommendations seriously, he should reconsider his plan to raise private funding for renewable energy in developing countries, given his plan relies on the use of carbon credits, which will provide an excuse for corporations to avoid deep and sustained reductions in their emissions. Also, the African Carbon Market initiative, announced by multiple African nations including Kenya, Malawi, Gabon, Nigeria and Togo, which is aiming to produce 300 million carbon credits annually by 2030, should think twice about its plans.

3. FAIRNESS AND JUSTICE FOR DEVELOPING COUNTRIES MUST BE AT THE HEART OF THE TRANSITION

It is therefore welcome that HLEG’s recommendations call for companies to explain how they are contributing to a Just Transition and consider the social impacts of mitigation actions, including on race and gender. A separate recommendation on “People and Nature in the Just Transition” highlights the need to recognise and uphold Indigenous peoples’ rights to land and water.

The HLEG calls on all alliances of non-state actors to update their guidance and membership requirements in line with the HLEG recommendations as soon as possible. That includes ensuring there is a transparent process for removing signatories or members who do not live up to their commitments and, prior to that, ensuring there is effective engagement with members to try to secure their compliance.

After facing backlash from members, the Glasgow Financial Alliance for Net Zero (GFANZ) – a global coalition of leading financial institutions who say they are committed to accelerating decarbonisation, has dropped the requirement that member companies sign up to the United Nations’ Race to Zero campaign raising questions about the ambitions of the alliance. This report should mark a turning point for GFANZ, and any softening of standards should be unacceptable.

The expert group calls for regulation to ensure non-state actors are held accountable for their climate actions, by “establishing clear, enforceable standards that apply to all, limiting potential for greenwashing and reducing the risk that laggards will take market share from leaders.”

This is what Oxfam and many of our partners have been demanding for many years. The EU is leading the way when it comes to obliging companies to report on their emissions. Its recently adopted Corporate Sustainability Reporting Directive (CSRD) will require large companies to report on all their emissions, including scope 3 emissions. In line with the recommendations from HLEG, the EU’s future Corporate Sustainability Due Diligence Directive (CSDDD) should build on these new disclosures and oblige companies to carry out climate due diligence in their value chains while adopting climate transition plans in line with the Paris Agreement 1.5C target.

With regulations and disclosure requirements evolving across various countries and regions, Oxfam also welcomes the panel’s recommendation for a new Task Force on Net Zero Regulation to connect policymakers and work towards rules that are internationally consistent and which avoid fragmented regulatory regimes.

We need ambitious action and we need it urgently. Companies and other non-state actors must stop hiding behind weak commitments and greenwash and start taking real action – and these new recommendations should mark the bottom line for all corporate climate action from now on.

This article was previously featured on Oxfam's Views and Voices

If you liked this, try: