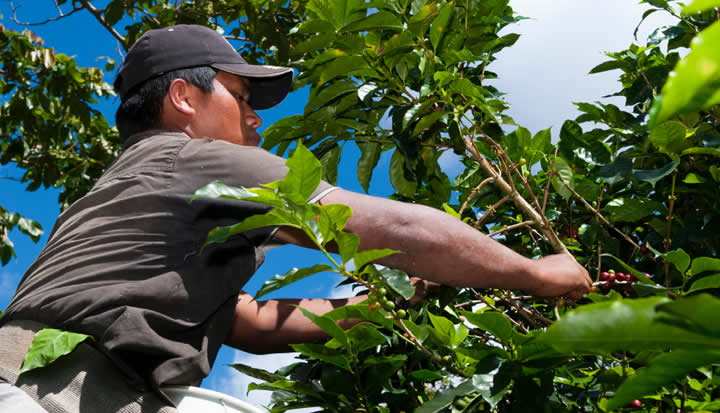 Climate change and your supply chain

What happens when climate change impacts on source products that are part of a global supply chain? Oxfam posed this question to three multinational corporations to find out what companies can do to support the farmers in their value chains to adapt.

At Oxfam we know that hundreds of millions of people are already suffering damage from a rapidly changing climate, which is frustrating their efforts to escape poverty. We have heard time and again that farmers are finding it increasingly difficult to know what to plant and when, as seasons that have been relied on for generations are becoming erratic and hard to predict. At the same time, scientists have become increasingly confident in attributing extreme weather such as the Pakistan flood, along with the Russian heat wave which occurred that same year, to climate change.

How, though, do climate change impacts on agriculture in developing countries affect companies and consumers at the other end of global value chains? This was one of the questions Oxfam considered for a new discussion paper, Climate Change Risks and Supply Chain Responsibility. We wanted to understand the role and responsibility of companies to support farmers in their value chains to adapt.

The paper is built around interviews with three companies: Marks & Spencer, Starbucks and Body Shop. It also explores how growers of key products they source – cotton, coffee and sesame oil – have been affected by climate change. Through our interviews we heard how Pakistani cotton farmers working on less than 5 hectares of land rented from land-owning elites were hit hard by the floods. Worse still, they missed out on government assistance, which was directed to the land owners rather than the affected farmers.

We also heard that across Colombia, rainfall has been 40 per cent greater than average in the last three years – unprecedented according to the Colombian Coffee-Growers Federation – leading to landslides and increased incidence of disease in coffee plants. Coffee farmers are responding by replacing much of the Colombian crop with more resistant varieties, costing farmers several years of lost income as they wait for new trees to mature.

And we heard that in Nicaragua, unpredictable and extremely wet weather has weakened sesame plants and interrupted the drying of the seeds, causing many of them to go rancid. However, a local co-operative of farmers has developed a comprehensive strategy in response –diversifying what they grow so that livelihoods can be maintained, whatever the weather.

The companies we spoke to say that farmers’ hardships do not yet impact their business or their customers, though some companies acknowledge that all is not right. Value chains are particularly vulnerable in the face of multiple shocks, such as the Pakistan floods which hit when cotton supplies were already low, leading to panic buying. Cotton prices shot up from a long-term average of about 65-75 cents a pound, to almost $2.50 a pound for some shipments.

Ignoring these risks can lead to companies and producers to adopt short-term coping strategies to deal with immediate issues, but which may undermine longer-term resilience. However, given scientific uncertainties around the precise location, magnitude, timing and consequences of climate impacts, how should companies respond?

Through our interviews with companies, we were also left with some pressing questions about how value chains will need to respond in the face of the challenges described here.

This is a work in progress – Oxfam certainly doesn’t have all the answers, and we want to understand from others whether the proposals we set out are realistic and how sourcing strategies will need to change in future? What we do know, however, is that doing nothing is not an option.