Beyond advocacy – business needs to get its head in the game 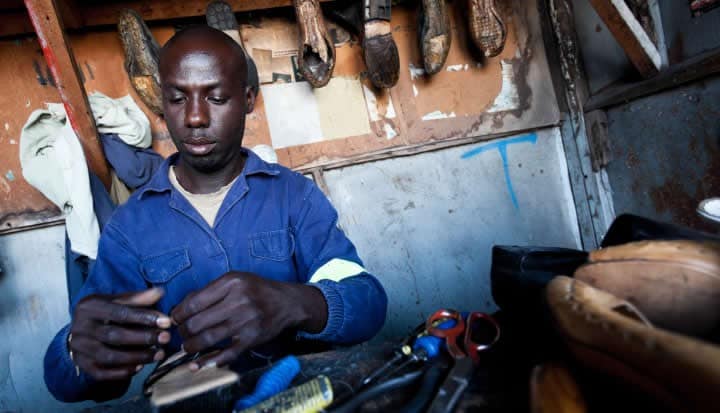 Click here for more stories about
Youth
Monday May 7 2012


South Africa has one of the worst youth-unemployment problems in the world. By some estimates, less than half the working-age population is employed, and the figures for those under 35 are even worse. The reasons for this crisis can be illustrated by an example, provided by our National Planning Commission, that involves a young girl called Thandi. She is one of a group of children who entered school together in 1999. Of that group, only 54 percent made it to the last year of formal schooling. Of those who took the exam to graduate, only 25 percent scored well enough to go on to higher education. And of those few, any who were young, black, and female, as Thandi is, and who had gone to a predominantly black school, had only a 4 percent chance of going to university. Even if Thandi were among that 4 percent, the odds of her having the money to go to university would be slim.

So Thandi will try to find work. But the chances of her getting any work in the first 5 years after she leaves school are only 25 percent, and the chances of her earning the median wage of R4,000 ($520) per month are less than 2 percent. For her whole working life, she will be unlikely to earn above the poverty line of R480 ($63) per month. Her children will be born into poverty. It is only when Thandi turns 60 and gets a state pension that she will be able to break out of the cycle of poverty.

We have made great strides in improving access to education—more than 98 percent of children who should be getting a primary education are, but as with many of our counterparts on the continent, being in school is not enough. Only 35 percent of the children in third grade are able to pass the literacy and numeracy tests for that age group. And that problem persists throughout the school years of South Africa’s youth. As the case of Thandi shows, we live in a country where the effects of apartheid, one of the worst systems of mass disempowerment ever seen in human history, persist. The children at formerly all-white schools almost always go on to a university education, a job, and a life of privilege. The children at schools that have remained almost entirely black usually do not. In South Africa, your life chances are overwhelmingly determined by race, by birth, and by where you go to school.

What is to be done?

We have to stop pussyfooting around if we want to solve this problem. On the supply side, we must confront the fact that while our government has been incredibly successful at large, one-off projects that involve a limited number of steps (we hosted a very successful World Cup, put a satellite in space, and built a world-class passenger-rail service in our richest province), it has failed when projects require regular, on going contact with a large number of end users, such as in education. On the demand side, we must solve the problem of businesses that would rather poach employees from other companies than employ and train talented people who lack skills and work experience but could add value in the long term. (This, in spite of the fact that while the unemployment rate in South Africa is astounding, businesses struggle to fill vacancies.) And we also need to address the structural constraints of a large, poorly educated, mostly black population without the social capital to get workplace skills, work experience, and job placement.

Yellowwood, a member of Business Leadership South Africa, an association of the country’s largest companies and multinational corporations, has started a project that is beginning to confront those challenges. Called Harambee, it focuses on the factors that prevent young people from finding employment.

On the demand side, Harambee prepares first-time employees for work, providing a pool of skilled workers for businesses and minimizing the risks associated with employing first-time job seekers. Moreover, it has built a scalable model to source, screen, and match high volumes of young people based on their personal strengths, instead of simply looking at their educational history or other formal qualifications, and it can do this for multiple organizations at the same time. Harambee also assists job seekers in identifying which of their skills may need improvement and offers them help. On the supply side, Harambee sources and selects young people who exhibit demonstrated potential but who have gaps in work readiness, and puts them through an intensive bridging program that helps them cultivate the skills and personal development needed for success in the workplace. They are then placed in preselected, permanent, formal-sector jobs.

Harambee also addresses the resource constraints and lack of social networks that young people face when looking for work. It deploys recruiters to the areas of greatest deprivation, for example, and creates application processes that use accessible technology, such as cell phones, to reduce the costs of applying for a job.

Harambee provides a model for a long-term solution to youth unemployment, by showing the importance of business and government working together to address the problem. Only the government has the scale to reach the young and unemployed, and only the government can make the long-term commitment needed to educate our children. On the other hand, the business community knows which skills it needs and what it takes to make someone employable. Business must work with government to adapt the school curriculum, in particular the curricula of Further Education and Training (FET) courses, so that young people leave school ready for work. Training programs must be tailored to demand. If this doesn’t happen, government will be spending money in vain. In South Africa, we have already seen the success of one such effort, in which the five biggest construction companies helped rewrite the syllabi of FET colleges to meet their industry’s needs. The result: an increase in the percentage of graduates who found jobs.

We also need to build in incentives for businesses to address the social-capital deficit in poor communities.

We must find ways to get CEOs on the school boards of underperforming schools, young professionals into the churches and mosques of the inner cities, and young people with talent but no money into the internships currently reserved for the elite. We need to make it easier and cheaper to apply for work by providing incentives for businesses to reach out to applicants.

Only when business and government work together to leverage their comparative advantages can we begin to address the problem of youth unemployment. Business needs to get its head in the game. As businesspeople, we must remember that youth unemployment is not just a problem for government; it is a problem for everyone. It is also not a problem that one group can solve alone. The solutions are not simple, but we have a common interest, and together we can make a start.

This essay first appeared in Voices on Society, an online publication from McKinsey & Company's Social Sector Office. Voices on Society convenes experts from around the world to consider complex societal problems. The viewpoints are diverse and provocative. They come from academia and established organizations as well as from those on the frontiers of new thinking and new methodologies.

This essay was featured as part of the new publication's inaugural volume entitled, "Jobs for the Young & Restless," which addresses the Global Youth Unemployment Crisis.