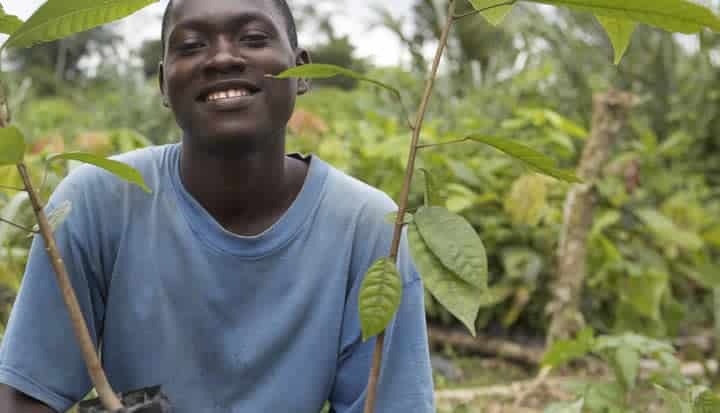 
Child labour is both a symptom and a self-perpetuating cause of poverty. Children in cocoa growing areas often face the harsh realities of rural poverty (including scarcity or low-fertility of land, food insecurity, lack of education infrastructure, poor access to potable water, and remoteness from markets). The practice of children working on cocoa farms is often a traditional and necessary way of life for cocoa farmers, who also want to train their children to look after the farm in the future, at the same time as using them in order to reduce labour costs on the family’s farm.

But while children helping out on the farm is often understandable, and can have some positive benefits for the children, their futures and their families, concerted international, national and local effort is required to ensure that this work is not harmful or hazardous, and does not interfere with the schooling on which children’s brighter futures depend.

Created in 2002 to tackle the problems of child labour, child trafficking and forced adult labour in the cocoa supply-chain, the International Cocoa Initiative (ICI) was established as a unique partnership between civil society, labour unions and the chocolate industry, working together with the authorities in cocoa-producing countries, with national and international development agencies, and with the cocoa-growing communities themselves to offer a real and sustainable solution.

Based on 10 years of experience and presence in the field, ICI strongly believes that tackling the issue of child and forced labour as well as trafficking requires coordinated action on multiple fronts. Actions are not only needed at community level, but also at national, regional and international level to ensure effective results and lasting change. ICI’s activities include:

At community level, ICI has developed a process to raise awareness of cocoa farmers about hazardous labour practices and identify how to ensure these practices are brought to an end. The ICI’s programme is community driven, and is implemented by trained local NGOs, as they are best placed to work closely with local communities to stimulate the debate, and the initiatives, necessary to change accepted practices.

ICI’s model was validated in 2009 by independent evaluators assessing the ICI’s programmes in Ghana. The evaluation found a significant change in attitudes and behaviour, combined with a reduced exposure of children to hazardous labour and an increased education enrolment and attendance rates.

Importantly, ICI’s awareness raising activities in communities do not try to stop children from helping their parents on the family farm. Instead, it focuses on stopping their involvement in hazardous tasks.

But because actions are not only needed at community level to ensure effective results and lasting change, ICI is active at the national level to help governments build their capacity to safeguard a protective environment for children and workers in cocoa-growing communities.

ICI also supports the establishment of monitoring systems that enable child labour and child trafficking risks to be identified and addressed. In addition, ICI works at the international and regional levels to ensure that all its efforts are coherent with international norms, and are backed up by political commitments at the highest level.

A credible independent partner, endorsed by multiple and diverse stakeholders, ICI is now a recognized technical leader and reference point for:

For more information about the Foundation: www.cocoainitiative.org.

One response to “Working Towards Responsible Labour Standards for Cocoa Growing”