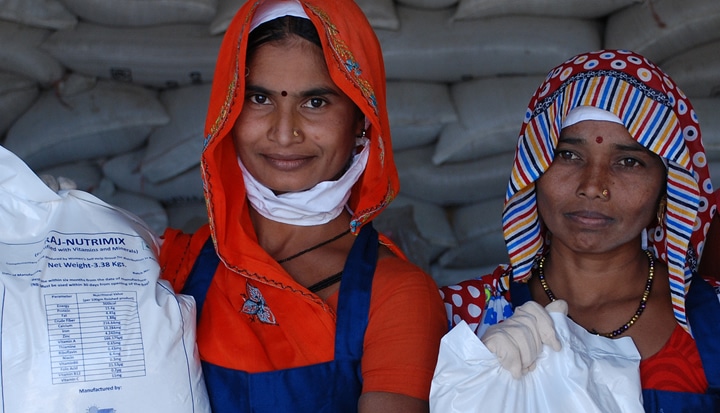 
Helen Davison, Senior Associate External Affairs, GAIN
In a remote village in rural Rajasthan 10 local women own and operate a factory delivering 30 metric tons of a flour enriched with vitamins and minerals daily to 6,000 children under the age three and nearly 3,000 pregnant or lactating women.

Rajasthan is India’s largest state and home to a high percentage of children that are undernourished and are not consuming the necessary vitamins and minerals they need to thrive. Poverty often leads to malnourishment at a young age and this increases the risk of impaired growth, susceptibility to serious illness and early death.

GAIN, the United Nations World Food Programme (WFP) and the Government of India set up the Banswara Factory as part of a model for producing supplementary food, referred to as “take home rations,” that is distributed through government-supported community centres. The approach centres on developing small-scale production facilities run by a cohort of women entrepreneurs who would be both owners and workers in the factories.

The factory complements the Indian government’s program to provide additional supplementary food fortified with vitamins and minerals for free to pregnant and lactating mothers and children under the age of three. The factory produces a product called Raj Nutrimix – a mix of flours, wheat and sugar fortified with essential micronutrients which are also palatable to children. The State Government of Rajasthan, through their social welfare program, acts as both a buyer and distributor of the product, and then provides the product to pregnant and lactating women and to children under three through community centres.

The government had a critical role in this project as both a purchaser of the product and as distributor of it to the intended audience, which includes the job of educating mothers on how to appropriately cook and consume the product. However due to poor education and distribution strategies, the product remains foreign to many women in the rural areas and are not reaching as many consumers as anticipated.

“Connecting with an existing public delivery system allows for quick, easy access to target consumers, but promotion is still necessary to increase consumption of the new product,” she said.

GAIN has written three case-study articles in collaboration with the Global Business School Network (GBSN), and the Tuck Global Consultancy Program at the Tuck School of Business at Dartmouth about our work in improving nutrition for the most vulnerable groups. The case studies examine lessons learned from various programmatic interventions to improve nutrition for young families in Côte d’Ivoire, and in the states of Andhra Pradesh and Rajasthan in India.

GAIN supports the promotion of optimal feeding practices for infants and young children, including exclusive breastfeeding for the first six months of a child’s life, and continued breastfeeding, alongside safe, diverse and nutritious complementary foods, until age two and beyond following WHO recommendations.

These case studies and more lessons learned by GAIN on improving nutrition for women and children will be presented at a symposium in London on 26 February. Please click here to register now for “Making a difference in the first 1000 days to improve the lives of children and women”