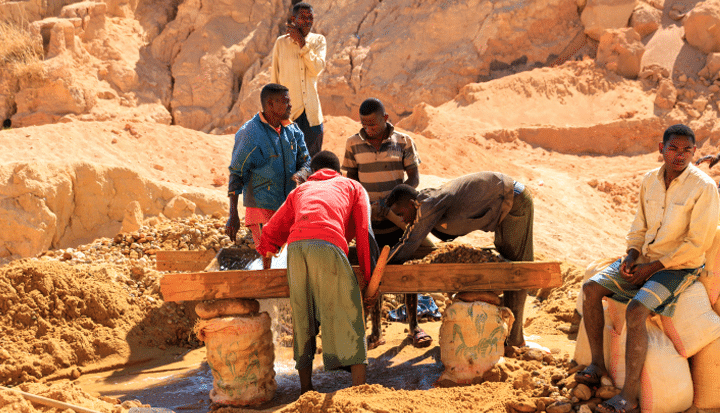 As we look forward to a dynamic and successful 2015, we are also looking back – ten years back, to the original conception of the Diamond Development Initiative .

The idea of DDI took shape in January 2005, following the 2004 publication by Partnership Africa-Canada and Global Witness of Rich Man, Poor Man—Development Diamonds and Poverty Diamonds: The Potential for Change in the Artisanal Alluvial Diamond Fields of Africa.

The report detailed the social and economic problems associated with artisanal diamond mining, and although it didn’t make concrete proposals, it spoke of organizing a wide group of stakeholders to tackle these issues. By then, the Kimberley Process Certification Scheme (KPCS) had been up and running for a couple of years and as a regulatory system, was ill-equipped to address key development issues in alluvial diamond regions.

The joint publication was presented in Ottawa in October 2004 at the Kimberley Process plenary meeting and the response was tepid. Several African governments spoke favourably about the need to tackle the issues that had been raised, but other governments feared that it might be putting too much pressure on the newly-launched KPCS.

Others however, didn’t delay. A plan was immediately hatched by De Beers, Global Witness and PAC to host a joint meeting in January 2005 to explore development issues further.

This wasn’t just a good idea, it was radical, because at the start of the conflict diamond campaign,NGOs and industry had been anything but friends.

What had changed? Two things were now clear: firstly that the issues raised in Rich Man, Poor Manwere real, and secondly, that the NGOs could not bring about the changes they envisaged without the participation of industry and governments.

The Event that Started it All

The meeting took place in London and was chaired by Walter Kansteiner, a former US Assistant Secretary of State. It brought together governments of several African and European countries, in addition to key industry representatives. The event not only clarified DDI’s raison-d’être and mission, but also gave it its name, which was chosen by secret ballot.

But an idea, a name and shared enthusiasm can only get you so far. Turning this into something concrete would take many more months of meetings, debates and plans. Had people known how many,DDI might have ended as soon as it began. But the parties involved shared a strong commitment.

From Hatchling to Takeoff

The Diamond Development Initiative was legally registered in the United States in 2006 and received seed money in 2007 from the Tiffany & Co. Foundation and the Government of Sweden. DDI became operational in 2008.

Since then, DDI has worked in a number of countries in Africa and South America to sustainably improve the lives of artisanal miners and their families. A main pillar of DDI’s work is the formalization of artisanal mining, which has involved projects seeking to legally register miners as well as theDevelopment Diamond Standards™ which enable miners to follow socially and environmentally-responsible practices.

DDI continues to grow and to adapt to face the challenges before us. Founded with a focus on diamonds, in 2014 we began sharing our expertise and resources inprojects targeting artisanal gold miners and artisanal miners of th... (tin, tungsten and tantalum) in the Democratic Republic of the Congo. It is also in 2014 that we launched our 3-S Project to respond to the Ebola crisis in Sierra Leonean mining communities. We look forward to resuming our work on Development Diamonds Standards™ in Sierra Leone as soon as this emergency subsides.

Without a doubt, we have some very busy and important months in front of us. But we can’t do it alone. DDI was born from the collaboration of a variety of civil society organizations, businesses and governments and we remain committed to solutions that engage all parties.

It is by working together, engaging in the kind “radical collaboration” that brought us together in the first place, that we will reach a brighter future for artisanal miners, their families and their countries.

This blog was previously published on the DDI Website and is reproduced with permission.

Ian Smillie is the Chair of DDI’s Board of Directors. He is a founder of the CanadianNGO Inter Pares, and was Executive Director of CUSO from 1979 to 1983. He was also a founder-participant in the Kimberley Process and was appointed to the Order of Canada in 2003.