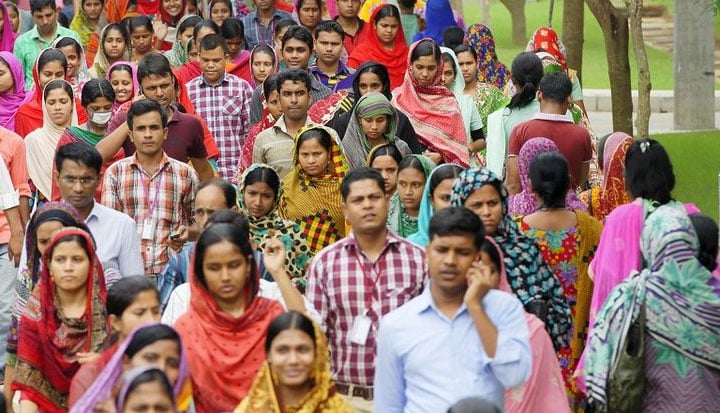 
Payday can be an ordeal for women garment workers in Bangladesh. Often, they must wait in long lines, carry wads of cash through crowded streets, or encounter a mother-in-law demanding money.

Garment factories account for a huge slice of Bangladesh’s economy and employ more than three million women. Most are paid in cash. That’s bad for both workers and management.

Factory owners waste plenty of money bringing in cash-filled trucks to distribute wage payments to workers. For example, guards must be hired to safeguard the process. Production time is lost when workers must stand in line for their pay.

Cash also forces workers to forego the safety, convenience, and privacy of having their pay deposited directly into an account. For example, when women workers come home with cash, husbands will often demand a slice of their pay.

There is growing evidence, however, that making the transition to digital forms of payment can save money and time for employers and give employees access to formal financial services and more control over their financial lives. This is especially true for poor women living and working in developing countries and emerging economies, and who may be opening their very first bank account to receive their salaries electronically. Women can also use their accounts to save for long-term personal or household goals like education or buying a parcel of land.

With the support of the Better Than Cash Alliance, we studied 21 Bangladeshi garment factories to measure how replacing cash with electronic wage payments could improve matters for workers and factory managers. We examined three different types of accounts:

Initially, some workers weren’t happy to forego cash. They didn’t understand how electronic accounts worked. Some feared they would lose their money if they forgot their PIN.

Today, however, the workers who we surveyed are mostly satisfied with an electronic payroll and don’t want to return to cash payments. They say the new system is safer and more convenient—and their satisfaction continues to improve year over year.

These payroll accounts open financial opportunities for workers. In Bangladesh in 2014, just 37 percent of men and 26 percent of women had a bank account, according to the Global Findex database. This means millions of unbanked adults struggle to save for the future. It’s also tougher to access credit on fair terms.

But, with wages increasing, workers want better ways to manage their finances. And electronic accounts can deliver big development benefits, especially for women.

Factory managers tell us electronic payments have saved time and money. Before the transition to electronic accounts, a typical worker spent about 18 minutes a month waiting in line for cash payments. In a factory with 2,500 workers, that meant 750 hours of lost revenue. Electronic payments cut the time to disburse wages by more than 30 percent. In some factories, it plunged by up to 80 percent.

Electronic payments also made it cheaper to pay workers—no trucks and long lines. Within two years of making the shift, factories that deposited wages into bank accounts slashed costs by 45 percent, a number that jumped to almost twice as much for hybrid models. Costs keep falling over time as workers and managers become used to the new system.

Replacing cash is not without challenges. In our study, mobile money accounts provided factory owners with time savings of 75 percent over cash. Yet, since the current payment model requires employers to cover the cash out fees paid by workers at mobile money agents, it actually increases the cost to pay their workers digitally.

On top of that is the ongoing challenge financial service providers face when serving poor people is making profitable products for customers who transact frequently and in low sums.

Across emerging markets, most financial institutions are already using agent and merchant banking to lower costs. And they’re finding opportunities to cross-sell financial products to customers, such as long-term savings instruments, which will help to lower transaction costs and increase financial sustainability of these new products in the long term.

Benefits for Workers: The beginning of the journey

Of course, measuring the effects of wage digitization from a factory perspective is only half the story. In a related study, the results of which will become available in 2017, we are measuring the impact of moving about 5,000 garment factory workers, mostly women, from cash to electronic wage payments. We are tracking the impact on these workers’ financial decisions relative to a control group paid in cash. We are interested in whether automatically depositing wages into an account encourages workers to save, and helps them better handle emergency expenses like a sudden illness. We’ll also learn whether depositing women’s wages into their accounts increases their role in household decision making and spending.

Despite some initial difficulties, the journey from cash to electronic payments in Bangladesh’s garment sector has begun and one thing is clear for women workers and managers: Electronic wages are vastly preferable to cash.

This article first appeared on www.betterthancash.org and is reproduced with permission.