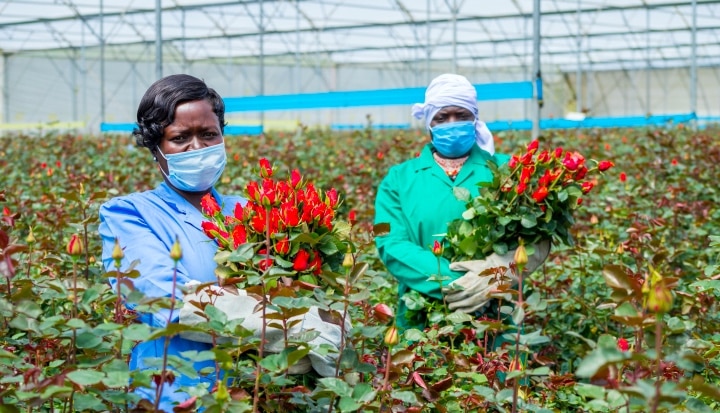 The flower and plant industry must move towards achieving living wages for underpaid horticultural workers in low-income countries and must support efforts to improve the rights of workers, so they can begin to build resilience to crises such as Covid-19, says the Fairtrade Foundation.

CHALLENGE: How can business support the most vulnerable in value chains and communities in the face of COVID-19?
Monday March 29 2021


The flower and plant sector is an incredibly important source of hundreds of thousands of jobs in low-income countries, and is particularly vital for women who make up around half of the workforce.

Globally, the export of cut flowers was worth over £6.75bn in 2018. However, with prices paid to flower farms for their products still very low, many workers overseas – particularly those outside the Fairtrade system – remain under-paid. Not only do they receive well below a living wage, but they also struggle with poor working and living conditions.

Over the past year, the Covid-19 pandemic has exposed just how vulnerable many global agricultural supply chains are to external shocks and has underlined the precarious nature of many farmers’ and workers’ livelihoods – including in the flower and plant industry.

Flower workers’ low wages – together with the lack of social safety nets, chronic food insecurity, and poor quality of water and sanitation – undermined their ability to deal with the problems caused by the pandemic. These included the rapid decline in flower sales and a subsequent fall in workers’ incomes. Women in particular bore the brunt of the crisis.

Now, as the road to recovery continues, Fairtrade Foundation is calling on the UK flower industry to join Fairtrade in working towards achieving living wages for workers in low-income countries, and to support flower farms to improve their workers’ incomes and rights. Only then can communities blighted by poverty stand a chance of building their resilience to crises such as Covid-19.

In a new report published by Fairtrade Foundation earlier this month, titled Blooming Back Better, we highlight the need for businesses, farms and governments to do more to tackle the challenges facing workers in the flower and plant industry.

Fairtrade is already committed to achieving living wages for workers on Fairtrade farms across the supply chains we certify, including flowers and plants: for instance, we have introduced a floor wage that ensures wages are above the World Bank poverty line, helping to increase earnings by as much as 130 percent in some countries.

Living wages are key to helping workers to flourish. Not only do they allow workers and their families to live a life of dignity, but they also enable them to build up their own savings and safeguard themselves when crises strike – be it Covid-19 or climate change.

Despite the challenges the pandemic has brought to the flower and plant sector, it’s time for other industry players to join Fairtrade in the journey of empowering workers. As the third largest importer of flowers in the world, the UK has a key role to play in driving progress.

Fairtrade Foundation is recommending that UK-based retailers and traders agree a multi-stakeholder initiative aimed at achieving living wages in flowers – similar to the Dutch Covenant for Responsible Business Conduct in Floriculture – backed by donor support from the UK government and others. This should include agreeing to pay a floor wage higher than the World Bank poverty line, and supporting flower farms with programmes that improve workers’ incomes and build resilience against future shocks.

Governments worldwide should also introduce an ‘appropriately benchmarked national minimum wage’ for the horticultural sector, where none already exists. It’s equally important that governments and non-Fairtrade flower farms recognise and work with trade unions to strengthen workers’ rights, including by ensuring fair and just remuneration, freedom of association and collective bargaining.

Aid has a key role to play here. We would invite the UK government’s Foreign, Commonwealth and Development Office (FCDO) to put achieving living incomes and wages at the heart of its Economic Development strategy. For instance, by backing further match-fund facilities such as its Vulnerable Supply Chain Facility, which supports businesses organisations (such as the Fairtrade Foundation) that are committed to achieving living wages for workers and want innovate in their supply chains.

Clearly, the pandemic has reaffirmed the need to address the structural causes of poverty in the flower and plant industry. Fairtrade is committed to playing our part. We began certifying flowers in 2001 and plants in 2014: today, nearly 70,000 people work on our certified estates, including in Kenya, Ethiopia, Ecuador and Sri Lanka.

Before the pandemic, over 825 million stems were sold on Fairtrade terms, generating nearly £6m globally in Fairtrade Premium – an additional payment producers can invest collectively in community and business projects of their choosing. Since then, we continue to offer vital support to Fairtrade workers and farmers affected by the pandemic, both through the Premium and through our Producer Relief and Resilience Funds.

As proud as we are of our impact, Fairtrade-certified flower and plant farms only make up a small proportion of the sector in low-income countries. Building a fairer and more resilient industry will require determined and collective action, including higher prices being paid to flower farms for their products, and action by governments and shoppers.

We all have a role to play in this: that’s why the more retailers and traders commit to sourcing more Fairtrade flowers, the better. Their support has helped workers get through some extremely difficult times over the past year, and is now more important than ever.