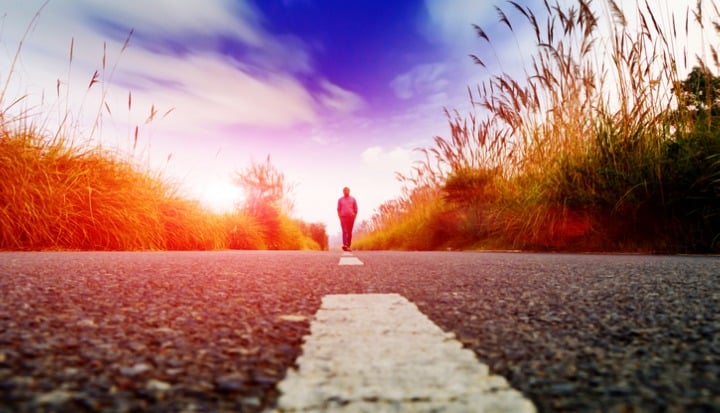 The link between Fair trade and climate change is complex but interconnected. By subscribing to the former, you help alleviate the effects of the latter. Pushpanath Krishnamurthy has taken 30 million steps in support of climate justice and the fairtrade movement. Read about his remarkable journey so far.


I am so moved by the heart wrenching impact of climate change across the globe, where women were hit first, worst and hardest.

It made me question my own personal responsibility. I was, as always inspired by Mahathma Gandhi, as to what he said about “being the change you want see to in the world”. Much like his famous “Salt March”, in the winter of 2009 as the world leaders were assembling, yet again, this time in Copenhagen to agree on a global climate treaty , I decided (a regular guy), to walk to the conference. Of course, as I did not live locally, this meant from Oxford to Copenhagen, a total of 595km.

My job at Oxfam at the time was as a global Campaigner and a popular mobilizer. For the purpose of this walk, I had managed to convince the management in Oxfam that I will take my annual leave to do this walk.

“I will gate crash the summit if need be” I thought, as I walked on the frozen, windswept, sunless days. I have walked  before and have gate crashed meetings, I believed, like Gandhi, that I have a right to serve and I don’t think anyone can take that away from me.

Originally, I was just thinking I would be walking and would hopefully meet a few people, but I could not believe how much of an impact it has had, with many others deciding to take action themselves. I was also so blessed with the friendship, support, generosity of communities, all that a product of historical goodwill that Oxfam had garnered and which, I shamelessly harvested in good faith as I was sheltered, fed, connected and cared.

The power of stories that I carried collected through Hearings, came in handy as I connected from parliamentarians and priests to postwomen and passenger train drivers.

My mobile was called from across the world: India, US, Africa, East Asia and even Iceland! I had by the virtue of this walk, gone from being an unknown to a global climate campaigner.

This first walk led me to think that I now needed to connect to significant growers, business entities and different societies. A thought that I took to Oxfam and moved to India, working for a small outfit like “Central For Social Markets”.

A partnership with a very large Growers Federation led to me to undertake my next walk and the mobilization of all stakeholders, business, and policymakers, the national/state government and across sections of the Western Ghat society.

The movement is led by the grower’s leadership and the effort is a work in progress. As many experiments on adaptation and mitigation is undertaken along with efforts to Brand the Coffee.

As the world leaders were discussing in 2015/2016, yet again, in Paris, for a FAB (Fair; Ambitious; and Binding) deal, a last ditch effort by Obama and the European leadership, with big players like China and India coming to the table willingly, I was walking furiously on the red earth soil kicking up a shower of vermillion up to my body. As always my power walk (to show time is running out) left the handful who managed to keep step, gasping while we left behind scores to saunter at their own pace.

This 450km walk along the seashore, across the plains of Tamil Nadu and up to the Mountain from the union territory of Pondicherry to the peak of the Blur Mountain, could not have happened without the marvellous support, energy and inspiration of the first generation business leader, Anjali Schiavina, of the famous Mandala Apparels.

It was also very surprising and poignant every time I set out to walk, the climate and the weather seem to wreak havoc at the starting point. This time, the city of Chennai (formerly Madras) was under a deluge of unprecedented proportions. My wife and elderly parents in a ground floor apartment slowly swallowed by rising water, but everyone including them still supported me to continue the walk with my fellow walker, Natesa Iyer!

This walk felt so complete because it was the initiative of businesses joined by household consumers, professionals like doctors, farmers, lawyers, organic growers, mothers, teachers and students. I met more than 8000 people directly and easily a couple of million through Radio, Broadsheet, TV and social media.

Since the walk, the idea of making South Asia’s first Fairtrade town was born and is flourishing now. Furthermore, the movement towards sustainable production and fair trade is slowly blossoming in India (e.g. tea, coffee, groundnut, cotton) is encouraging. Furthermore, schools and consumers are taking a prolonged, robust interest. In addition, fashion revolutionising activities are leading to innovative collaboration. In my opinion, the single most important outcome was the widespread influence the walk had on workers, housewives, school children and of course, farmers who swamped me wherever I went.

I have taken 30 million steps and have met approximately quarter million people. People say it is worth a book! Almost all of this, I have done within my own small pension, to carry on the good work, a small donation would be most appreciated. But for me, more people joining and making a fairer, sustainable world is far more vital. My one ask, to all readers, cynics and supporters alike, is that fair trade is definitely one way we can make a sustainable business. The link between Fair trade and climate change is complex but interconnected. By subscribing to the former, you help alleviate the effects of the latter. Growers, consumers and businesses all have their combined role to play, to make a significant impact for a sustainable world.

Please visit my blog: www.gopushgo.co.uk and support me with your words and experience too, donate via the portal and do invite me to speak at your events to raise awareness in your organisations.