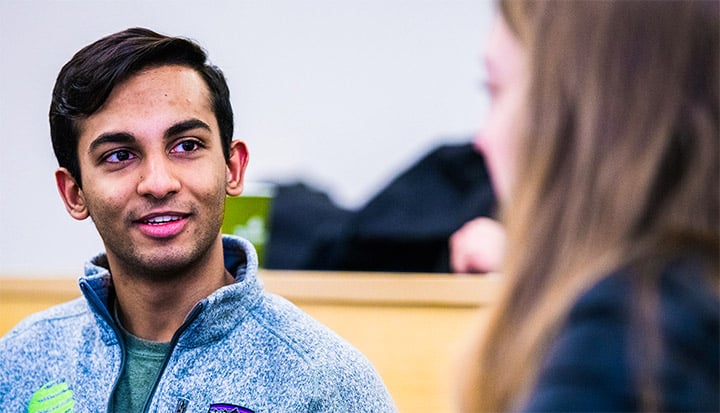 The M²GATE Virtual exchange program pairs students from Michigan & the Middle East to take on social enterprise challenges. Together they collaborate to identify a social problem in the region and come up with an entrepreneurial solution.


“I’ve never worked with people from so far away. M²GATE gave me the opportunity to work with people from another culture.  I enjoyed it a lot,” said Ryan Berg, a freshman at the Ross School of Business at the University of Michigan at the final session of Cohort 1 of the M²GATE program.

M²GATE is a new program organized by the University of Michigan’s William Davidson Institute (WDI), a non-profit focused on economic development in emerging markets. In the program, teams of six undergrads – two students from Michigan and four students from one of four Middle East countries (Egypt, Libya, Morocco, and Tunisia) collaborate to identify a social problem in the region and come up with an entrepreneurial solution. Elearning modules on topics such as social entrepreneurship, design thinking, the business model canvas, and leadership provide them with the instruction and tools needed along their 8-week journey.

The teams do all of their work virtually – using technologies including BlueJeans, Google Hangouts, Facebook, and WDI’s proprietary learning management system, the ExtendEd portal. Program staff based at WDI, along with mentors based in the Middle East and North Africa (MENA) region, guide them on a weekly basis as they work on their social entrepreneurship project.

For Berg and many other students from the University of Michigan, the program presented a unique opportunity to learn firsthand about serious challenges in the MENA region. Berg and his teammates from Cairo named themselves the Guardian Angels and decided to focus on the problem of child labor. “I didn’t know that child labor was such a huge problem in Egypt. This was an eye-opening experience.”

“I appreciate that the students from Michigan were willing to invest time and effort into understanding the issues in our region, said Maroua Nouira of Tunisia, who recently completed her degree in finance and whose team, Caerus, chose to focus on pollution in the MENA region as their challenge.

For Deena Berri, a sophomore at University of Michigan Dearborn, meeting people from different cultures and hearing their social issues was of great value. A double major in business and international studies, Berri said that the program taught her useful skills she will be able to apply in her future career in international business. “I sharpened my cultural sensitivity skills, my teamwork skills, and my delegation skills,” says Berri, whose teammates were from Libya. Her team, Alpha, focused on the refugee crisis for its project.

For Abdalrahim Braika of Benghazi, working with teammates from diverse backgrounds and cultures was very valuable. “The diversity of the team helped us open our minds and think differently,” he said. His team, the Eagles, decided to tackle the issue of the weak education system in Libya.

Chaima Jahouri, from Marrakesh, said M²GATE was a great opportunity to take learning from theory to practice. “This program let us see how to do things in real life.” Her team, the Alters, took on as their issue the lack of soft skills training in Morocco. The Alters ended up winning the business pitch competition that is the culmination of the program (their pitch video is viewable here). The four team members from Morocco will be invited to Michigan for a week of entrepreneurial activities – along with the winning teams from the two upcoming program offerings – this coming November.

Many participants mentioned the useful skills they acquired in the program. “I was delighted to take part in this program and learn so many things related to the business model canvas, leadership and entrepreneurship skills,” said Mohcin Bounadar of Rabat, Morocco.

Like many participants, Bounadar hopes to continue on the project his team started. His team, the Cross Atlantic Green Coalition, addressed the scarcity of water in Morocco as their challenge. “We must figure out how we can make our projects into reality and transform them into real solutions,” he said.

Noureddine Aroury, program manager from Morocco, summarized M²GATE by saying, “I saw with my own eyes that students got new skills related to entrepreneurship, cultural exchange, project management, and leadership. I think this program must continue because its impact is much great than we can see.”

M²GATE is funded by the Stevens Initiative, which is supported by the State Department and the Bezos Family Foundation. Named for U.S. Ambassador J. Christopher Stevens, the Stevens Initiative is an international effort to build global competence and career readiness for young people in the United States and the Middle East and North Africa while growing and enhancing the field of virtual exchange: online, international, and collaborative learning.