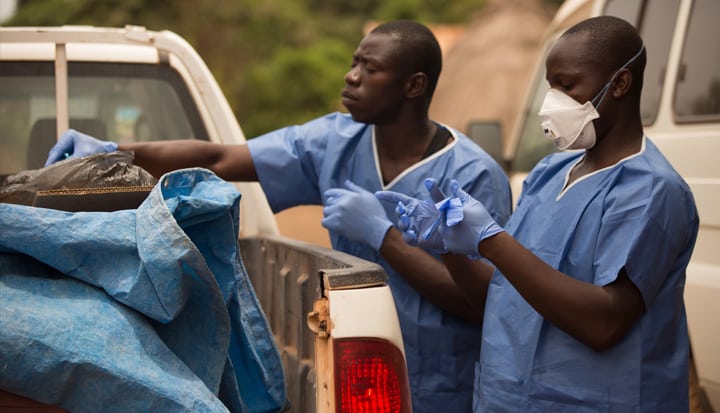 Click here for more stories about
SDGS
Friday May 22 2015


In our highly inter-connected world, nowhere seems very far away anymore. The scenes in West Africa where thousands of new cases of Ebola were being reported per week at its peak made very uncomfortable viewing and Unicef saw a huge surge in support from individuals and companies alike all keen to play their part in helping. In these circumstances Unicef had to mobilize on several fronts to keep children safe, working to stop the outbreak through actions at community level; preparing for outbreaks in additional countries and building back the primary health care and other social systems in the most affected countries.

At the start of the outbreak, Unicef was contacted by over 50 technology companies all keen to play their part to help. The tech community has an important role to play in health emergencies like Ebola, but in order to make their contribution really meaningful those on the ground need to advise on where their help is most needed.

In Liberia, for example, if a company offers to donate several thousand smartphones to the emergency response, the problem is that Liberian mobile phone networks are very thin outside the capital city, power sources for energy-hungry devices are hard to come by, and an expensive handset is worth more than two month’s wages. In this case the best way to support and drive change is to work with technology that already exists in the current environment rather than introduce something new.

Throughout the Ebola outbreak Unicef has been leading on social mobilisation and raising awareness among communities, through door-to-door, mass media campaigns and non-traditional communication methods to dispel misconceptions, provide critical information about available services and how to avoid contracting the virus. Community health workers have been trained on Ebola related messages around prevention, care and protection.

In this situation technology has had an important part to play. Using platforms that have a high number of active users in country has enabled us to get essential messages out to those who were most at risk. Working with technologies such as mHero – a solution that uses simple mobile phones to connect the government to frontline health workers using SMS and a similar system called U-report, already running in six other African countries, that connects hundreds of thousands of young people to vital information and services through text messaging and voice services, have proved vital in the response and reaching our aim of getting Ebola to zero.

With 9.8 million children and young people under the age of 20 living in areas affected by the disease, utilising technologies like these have been essential in keeping every child safe.

Sustaining a strong telecommunication infrastructure is one of the key areas in which technology companies can provide expertise. GSM (Global System for Mobile Communications) networks in Ebola-affected countries struggled to cope with the crisis due to weak networks being overloaded by a higher volume of calls and texts, and the fact that the staff who maintain these networks had to turn their attention to dealing with Ebola in their own communities. At the height of the Ebola outbreak in Liberia it often took over an hour to place a call and a few days for a text message to be delivered.

The tech community with expertise in this area has a large role to play. It has the ability to form strong partnerships with local mobile network operators that leverage the existing infrastructure, and help introduce stronger networks to support the response now and into the future.

Supporting existing efforts and technologies in place is also important for developers and designers who want to help. If you were a start-up or tech platform experiencing a crisis, you wouldn’t just bring in outsiders without any knowledge of the specifics of your problem to fix it. The same applies for the Ebola response. Right in the middle of a live emergency is not the time to build a new app without understanding what is going to be most helpful on the ground.

Working with organisations such as Unicef, is a way to ensure your technology is relevant to the situation. Most importantly, turning the tide against Ebola requires money. Unicef is appealing for over $500 million to help tackle the crisis, to support health and nutrition services, offer alternatives to the closure of schools and provide care for orphans within the local community. Unicef is supporting government in re-establishing general health and nutrition services, including making sure children receive vaccinations, medicines, mosquito nets, nutritional screening, treatment of severe acute malnutrition, and vitamin A supplementation. We are also promoting investment in health care and welfare systems to try to prevent future outbreaks, to tackle other killer diseases and to build sustainable programmes that better protect children in the affected countries and beyond. We have already managed to achieve so much since the outbreak of the disease. Liberia is now Ebola free, but we need continued help to reach zero new cases of Ebola throughout the affected countries.

There are many things the tech sector can do to help with emergency responses, but they are not always the obvious, top-of-mind solutions. Creating an app, as cool as that may be, will on its own, not be able to penetrate a market hampered by lack of connectivity and different user interaction models. Dropping hardware on a weak infrastructure tends to collapse the little existing bandwidth rather than creating new opportunities. The tech community can best help by donating money, staff time, and focused creative brain to organizations already working on the ground, helping them adapt, build, and deploy locally-relevant solutions to a global emergency such as Ebola.