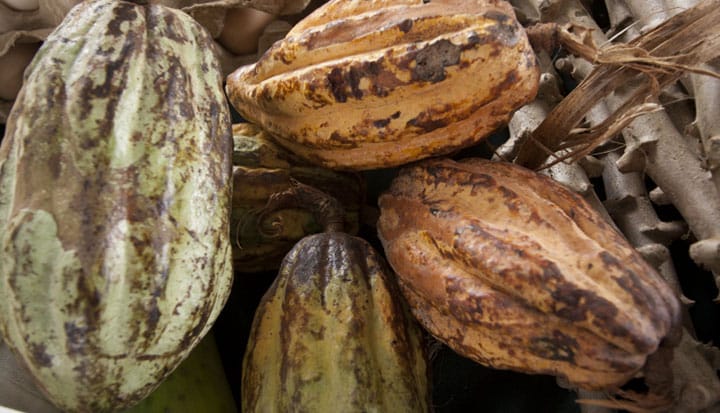 Christian Aid has been actively engaged in high impact partnerships in the chocolate world for a long time: we promoted, and invested in ethical chocolate company Divine Chocolate in its early days, and it is now widely available in UK supermarkets and hailed as the only Fairtrade chocolate company which is 45% owned by cocoa farmers.

The fairly priced production of cacao (the bean-like seeds from which cocoa, cocoa butter, and chocolate are made) is key to inclusive market development as it allows farmers to adapt to climate change whilst diversifying their crops.

Cacao grows in similar climates and altitudes to coffee but in recent years whilst the coffee market is challenged by climate change and by low prices that are discouraging farmers from increasing outputs, the cacao market is growing fast - it is estimated that by 2019 the Cocoa Market will be worth $2.1 Billion and the Chocolate Market worth $131.7 Billion.

The higher, more sophisticated end of the chocolate market is also growing fast. ‘Single origin’ chocolate bars are becoming increasingly popular. This means that all the beans in the bar come from one country and the beans come from traceable locations and are marketed by Fairtrade cooperatives.

Latin America is the original birthplace of the cacao bean and some argue it still produces the finest, original cacao. Christian Aid's cacao partnerships in Latin America include working with Sopexxca and Ingemann, two ethical businesses in Nicaragua. Coffee used to grow well in Nicaragua, but it has now become too hot to grow effectively. Yields are only about one sixth of what they once were. But with support from Christian Aid’s local partner, Soppexcca, producers are now switching to grow cocoa instead, which flourishes in this warmer climate. Cocoa growth and early harvests have been so promising that Soppexcca is now scaling up this pilot project, and plans to start commercialising locally-grown organic cocoa. Christian Aid is also working with Ingemann, a fine cocoa company, on the Adapta project. The four-year project funded by the Inter-American Development Bank promotes climate change resilience and helps cocoa farmers to build secure livelihoods.

In Bolivia, Christian Aid has been working for several years to support cocoa farmers in the Beni area of the Amazon rainforest. Our focus has been on supporting farmers to diversify their crops and produce wild cacao which grows under the canopy of the rainforest thus helps reduce deforestation. In November, several of these young cacao producers from Bolivia will be travelling to Nicaragua as part of a Christian Aid learning exchange to visit production methods and understand the business models of these pioneering cacao businesses. They will then return to Bolivia to apply this learning in their communities. Our hope is that some of the world's poorest communities will begin to benefit more from the global boom in demand for fine and origin cacao.