Turning Waste into Wealth – A Young Entrepreneur’s Contribution Towards Community, the Environment, and National Happiness 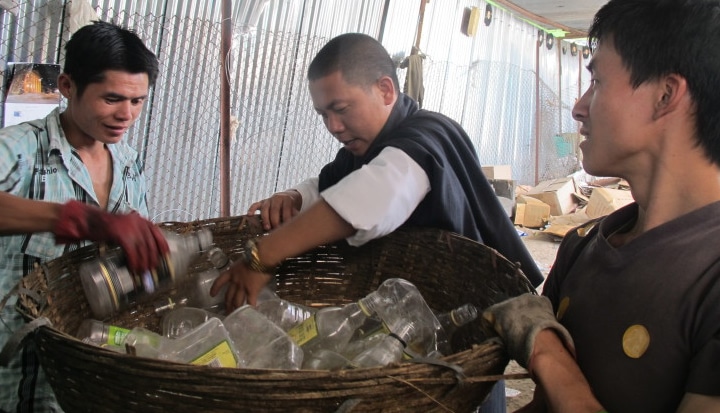 A Young Entrepreneur’s Contribution: Community and the Environment


At just 30 years old, Karma Yonten is Bhutan’s first citizen to turn waste management and recycling into a business. The old saying goes that “one man’s meat is another man’s poison”: Karma saw opportunity in the country’s maligned, unsightly and toxic landfills, which had dangerous side-effects for people’s health.

His pioneering enterprise, Greener Way, is now tackling Bhutan’s growing waste problem head-on: it collects, separates and disposes of domestic waste material; it manages over 1,000 tonnes of recyclable matter; it has launched ground-breaking education initiatives; and it turns organic waste into high-grade compost.

Karma has turned a loan of just over $8,000 into a $140,000 annual turnover. His business employs 31 people directly; it provides a fair income for more than 150 rag pickers; and is of invaluable service to Bhutan’s environment and community. Furthermore, Karma has received national and international praise for his green enterprise.

But a career in waste management was not what his family expected. “To quit my job and take up the waste business, which is considered very low profile in Bhutan, was never welcomed,” says Karma. “But I had a business dream and I was not going to let it go.”

With waste becoming a worsening problem in his local area, Karma devised a business plan and approached the non-profit organisation and Youth Business International member, The Loden Entrepreneurship Programme (LEP) - part of The Loden Foundation which helps young people set up their own businesses through training, access to finance, mentoring and technical support.

Loan finance enabled Karma to kick-start his business by buying necessary equipment and a waste collection van. “The LEP’s encouragement, mentoring and support were the driving force behind my venture,” said Karma, who is now on track to achieve his business goals of creating gainful green jobs, safeguarding the local environment and contributing towards Bhutan’s economic growth. His business, which operates in 5 regions and is looking to expand, has also been lauded for its contribution towards the environmental preservation pillar of Bhutan’s Gross National Happiness (GNH) philosophy.

Karma is considered by The LEP to be an exemplary entrepreneur and model young leader with a passion for the wellbeing of communities he serves. An organisation called WHAT (Waste Handlers’ Association of Thimphu) has been created to protect the rights of the ‘rag pickers’; Greener Way is introducing the concept of recycling, resulting in people changing their ideas about waste management and their purchasing choices; and strong partnerships are being created with schools, monasteries, health organisations and community groups to develop programmes raising environmental awareness about the environment.

Karma, who has been invited to guest-lecture at several tertiary institutions, including Columbia University’s Barnard College, has also participated in high-level meetings and was part of a Bhutanese delegation which included the country’s Prime Minister.

He is adamant that money is not his main motivation. Instead, employment, education, awareness and waste reduction have been the primary forces behind Greener Way, which is making extraordinary strides embedding environmental awareness and preservation in Bhutan and abroad.

Karma is the winner of the Environment category of Youth Business International’s Young Entrepreneur Awards. He is due to attend the Awards ceremony in London on 12 September.

Youth Business International (YBI), established in 2000, is an international network of independent organisations supporting under-served young people (18 – 35 years) wanting to start their own business but without the means to do so. In 2012, YBI members supported circa 12,000 young people to start in business with a combination of training, access to finance and mentoring. Business training was delivered to over 110,000 young people. It is active across 39 countries.

One response to “Turning Waste into Wealth – A Young Entrepreneur’s Contribution Towards Community, the Environment, and National Happiness”