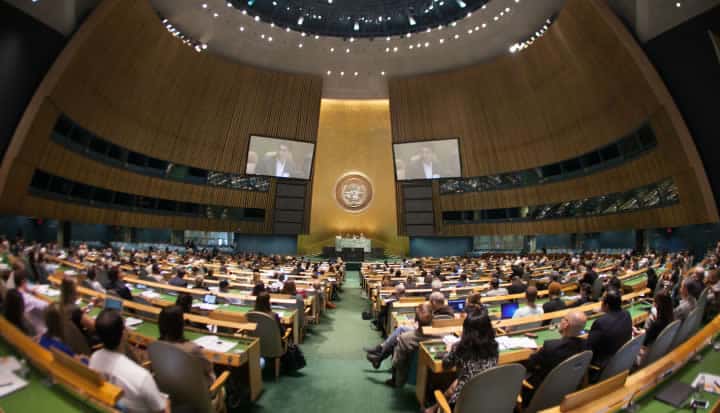 Photo credit: Jeffrey Holmes. The second day of the 2013 Social Innovation Summit in New York was held in the General Assembly Hall of the United Nations


From a presentation of a prototype for the world’s first cardboard bicycle to a conversation with “Mr. Toilet,” this year’s Social Innovation Summit, held May 29 and 30 in New York City, spanned the gamut of inventiveness and cross-sectoral approaches to systemic societal challenges.

Business Fights Poverty, a media partner at this year’s summit, sat down after the conference to talk with Zeev Klein, the summit’s founder and curator, to discuss the emerging themes this year and to gain his perspective on the evolving landscape of social innovation.

Which trends do you see unfolding in the social innovation space?

Crowd-funding is empowering citizen philanthropy but in itself is becoming a little bit of a commodity. Crowd-funding is a big space and there are many players. In order to be successful as a beneficiary looking to raise money you’ve got to do something different. Just saying you’re on Kickstarter or Indiegogo is not enough. As crowd-funding has become more mainstream and there’s more competition, it’s gotten harder and harder to discover early on those fundraisers that will be the real winners.

What’s an example of corporations engaging in social innovation that goes beyond philanthropy?

Microsoft had a really interesting session entitled “The Hidden Gem in STEM,” basically around the importance of STEM education. One of the things a lot of organizations are doing (although I think there’s so much more that can be done) is empowering young people with the tools that can lead to an actual career. Microsoft gave some really great statistics about how many young people are graduating with social science degrees and the lack of jobs in the social sciences, versus the demand for computer science, STEM and engineering positions, and the lag between those topics being studied and employers needing to fill those positions.

How do you define and measure social innovation?

I think there are a lot of terms out there with overlapping meanings… Blended value, shared value, venture philanthropy, cause capitalism, social innovation. I think a lot of them are roughly trying to say the same thing. I look at it from a slightly corporate perspective and to me the bottom-line question is: How do you take your resources and apply them toward socially desirable outcomes?

Nick Negroponte, who has spoken at our conference, has said, “If you need an Excel spreadsheet to measure the success of the activity you’re taking on, you probably aren’t successful enough.” I’d love to believe that when things are right and socially innovative, it’s just really apparent that they are socially innovative.

How do you see the social innovation space evolving in the coming years?

One of the things I’d love to see more of is what I’d call “corporate readiness” for some of these social entrepreneurs and nonprofits. Corporations are increasingly looking for smart partnerships and they very much want to work with the nonprofit community, but the nonprofits often don’t understand some of the basic requirements a corporation will have of them. In minimal cases you’re looking at transparency and accountability but more profoundly, if a corporation is going to align with a nonprofit brand it wants to know that the other side will deliver. What we’ve seen is that the most effective nonprofits have a turn-key solution with a program, timetable and set of deliverables… There’s always a certain degree of partnership risk and if you can eliminate that, what you’re left with is social benefit.

View the agenda and speakers for the 2013 Social Innovation Summit and follow them on twitter at @SocInnovation.