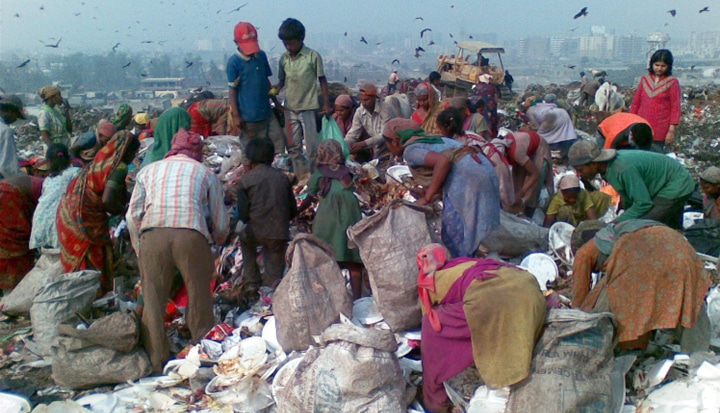 
When India changes its urban waste management system, it matters. Ashoka Fellow Ravi Agarwal has spent the past two decades moving mountains… of rubbish. He is counting on the youth to give the final push.

With global waste measured in millions of tonnes, it is easy to question whether recycling your water bottle or daily paper can really have an impact. In India, a recent survey by the Energy and Resources Institute (TERI) showed that almost half of people in the 35–44 age bracket were unwilling to segregate their waste at all. Too much effort, a lack of space for multiple bins and a lack of trust in local authorities to handle recyclables were quoted as reasons for resistance.

The sheer amount of plastic and other waste along Indian road sides would be enough to put most people off the mammoth task of urban waste management. Not social entrepreneur and Ashoka Fellow Ravi Agarwal. For the past two decades, he has been working to change a system which has the potential of improving health and saving the environment in which one sixth of the world’s population lives.

A country of 1.2 billion people, India produces more than 55 million tonnes of solid waste annually. Consumption per capita is still lower than in many developed countries, but urban planners fear that the country’s exceptional growth will flood the system. The latest official Census of India statistics in 2011 showed that Bangalore’s district population alone rose a staggering 47 per cent in just ten years, making it the second fastest growing city in India, after Delhi.

At times, the figures do overwhelm him, Agarwal admits during a phone interview from his base in Delhi. “When we make 5 per cent progress and realise the city has grown 20 per cent, I get impatient”, he says. His answer has not been to grow his environmental research and campaigning organisation, Toxics Link, but rather to build strategic partnerships with women’s groups, schools and rag pickers associations.

The latter group have traditionally been crucial to India’s waste management. Recycling to this date is carried out largely by the informal sector, though the nature of the work has changed. “Waste has become incredibly complex”, Agarwal explains. “It is no longer simply sorting glass from paper and tin cans. We now have multi-layered plastics and all kinds of new materials coming into packaging. These cannot be recycled without high tech recycling facilities.”

It is not just the volume of waste, but its hazardous contents which concern Agarwal and his team. Chemicals in products, lead in paints, pesticides in food and bio-medical waste have all contributed to the toxic mix that forms a constant threat to the land, air and water. On top of that, the demands of a rising middle class and illegal dumping from foreign countries mean that electronic waste is a growing problem.

A study by released last month by the Associated Chambers of Commerce and Industry of India (ASSOCHAM) showed that as many as 8,500 mobile phones, 5,500 TVs and 3,000 personal computers are dismantled in Delhi every day for reuse of their component parts and materials. In the capital alone, it is estimated that over 150,000 workers are employed in official and unofficial e-recycling units.

Acutely aware of the danger of disappearing income opportunities for the waste pickers, Agarwal turned the changing substance of waste into sustainable employment for those at the bottom of the economic ladder. He is currently working in two cities to help illegal waste pickers become authorised collectors.

Once licensed, the workers pick up computers, fridges, TVs, mobile phones and separate the non-hazardous parts like the plastic cases, before delivering the remainders to recycling facilities. “The idea is to take the hazardous component of the waste away from them, without threatening their livelihood”, explains Agarwal.

In order to tackle the problems at large, Toxics Link has successfully pushed for policy change and law reforms, banning the most toxic substances, including mercury, and restricting the use of many others. Agarwal believes that industry and government need to step up to the plate, but that consumers will hold the real power to demand change.

Through innovative ways of communication, Toxics Link aims to reach the next generation of environmental leaders. They create films to show in schools and recently developed a graphic novel with SAGE Publications. Educating the youth is a key part of the strategy, says Agarwal. “Once they are fully aware of the dangers to their own bodies and the environment, they won’t accept the situation as it is.”

Calling all young sustainability entrepreneurs! Unilever and Ashoka Changemakers are looking for the next generation of leaders. Do you have an innovative solution? Enter it today.

This article was originally published by Virgin.