The Power of Insurance and Haiti’s Future 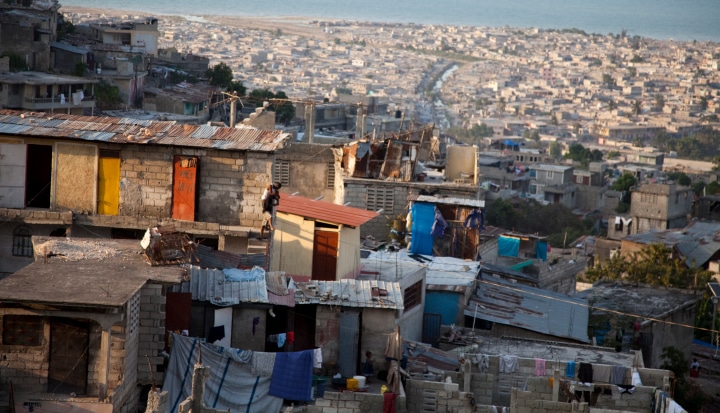 The Power of Insurance and Haiti’s Future


The Haitian people face repeated natural and man-made disasters every year – just last week a tropical depression hit the island bringing heavy rains. Haiti is not the only Caribbean country exposed to extreme weather events, but we are the most vulnerable and terribly ill-prepared. What would pass as a shower in the Bahamas leads to major flooding in Haiti, and the environmental degradation of the nation compounds the impact of extreme weather. The predominant cultural mindset of our country is “God will Prevail”, so there is a lack of preparedness for future risk at all levels of society. Despite decades of international involvement, Haiti continues to wallow, and from our position today it can be difficult to identify the first step on the path towards growth. But when a country hits rock bottom, no one can bring it back to life but its people.

What ingredients are missing from previous attempts to get Haiti on a sustainable path to social and economic progress? Without a doubt one of the most important missing links in the Haitian search for prosperity is risk management. Sir Winston Churchill said, “If it was possible for me, I would write the word insurance in each home and on each man’s forehead, since I am so convinced that insurance can, at a moderate price, liberate families of irreparable catastrophes.”

Churchill’s point serves to highlight Alternative Insurance Company’s (AIC) belief that unmitigated risk and our under-developed insurance industry contribute to Haiti’s economic, physical and social degradation. Haiti was already the poorest country in the hemisphere. The earthquake and the subsequent storms continue to stunt our efforts to get on a path to growth.

People don’t think the poor need insurance, as if poverty implies they have nothing to protect. But the goal of insurance is to make sure people can survive hardships, and the poor are those who are most exposed. The challenge Haiti faces is building a safety net for rural people whose certificate of deposit is their cow, whose demand deposit is their goat, and whose cash is a chicken.

The vast majority of households are uninsured, and after each shock – whether weather-related or man-made, such as fires set to market places – the losses make the Haitian people poorer. The government itself is not prepared for a major event, and after the 2010 earthquake Haiti not only lost 300,000 people, including 30% of its civil servants, we lost the patrimony of our nation, the visual markings of our history, democracy, culture: the Presidential Palace, the Cathedral, and the parliament buildings. Other than the independent government-owned entities like the Central Bank and the Banque Nationale de Crédit, the Haitian government did not insure a single building, vehicle, or stick of furniture. If, as we say, “Si se Bondye ki voye. La peye chay la pou wou ”, If it is God who sends you, he'll pay your expenses. Haiti is long overdue for a paycheck.

Limited access to social security is the common denominator in all underdeveloped countries, and Haiti is no different. Less than 3% of the population has access to social security and less than 200,000 people out of a population of 10 million have access to health insurance. There are at most 300,000 people insured by any product in all of Haiti. The population turns to unconventional risk management to address this exposure: loan sharks, selling assets, and depleting the few savings they have. These methods always fall short of expected results.

The earthquake’s economic impact illustrates how a fragile economy is pushed further into poverty by an external shock when it does not have the capacity to face risk. Risk requires preparation, and the poorer you are, the more urgent that preparation is. Haiti’s population is not only poor, it is also fatalistic. Fatalism is a key contributing factor to our lack of preparation, so we continue to feel the full impact of every shock.

Each time Haiti is hit by weather or social unrest, the cost of the shock is threefold: the loss of property and/or the loss of life itself; the negative impact on the economy; and the cost of rebuilding after the loss. The victim also experiences the additional cost of productive time lost. Without insurance, the family, or nation, may not be able to recover at all. By contrast, insuring the things most precious to us – our lives and our assets – we take the first step on the path to self-determination.

AIC’s history is one of developing risk-management tools to provide Haitians with a greater capacity to face risk. These tools are not just insurance products. They include our commitment to educating our customers; building an understanding that insurance can help proactively protect our future. We built our business in an unregulated, highly-competitive market, selling products that are as much about changing Haitians minds as they are about insuring their assets. Our business model reflects the values of the UN Millennium Development Goals, and contributes to Haiti achieving those outcomes. And our products and educational campaigns are both integral to the company’s success while supporting the overall economic and social development of the country.

For example, in May 2012, AIC organized an insurance summit, Haiti For Sure, to examine the insurance industry from multiple perspectives, and to consider good practices and experiences from home and abroad. The Summit sought to leverage the joint efforts of the insurance industry, the Ministry of Economy and Finance and external partners towards regulating the sector and developing a more proactive mindset. Additionally, rather than depending on an opaque regulatory regime, tax avoidance, or price-fixing to compete, we model good corporate practices as a competitive advantage and a way to build the trust of its clientele. We educate the Haitian population on their rights as policy holders, and on the importance of risk mitigation.

Haiti needs a vibrant private sector to address the poverty in our country not only defensively, as insurance does, but proactively too by creating high-value products and services, good jobs and more economic stability that will inevitably help the country accomplish the UN MDGs. Haiti needs growth fueled by a virtuous cycle of private sector and industry leadership in an environment that is increasingly independent from government, transparent, and that contributes to building the tax base. Our goal is not only to transform the insurance industry, but to lead by example, and to encourage other Haitian firms to follow suit. We believe the private sector has a role to play in contributing to the prosperity and future of Haiti. Insurance can protect our citizens while other sectors build.

Things are improving and there is hope for the future. Thanks to the Inter-American Development Bank’s belief in private sector initiatives that foster Haitian self-determination, they made their first-ever private sector investment last year in AIC and the insurance industry. AIC is also finding success educating its client base, one of whom recently said, “The reason I bought Protecta is because…I am preparing in advance.”

There is a long path ahead before Haiti achieves better indicators of social progress and more economic prosperity. We Haitians know another storm is coming. To change our culture from fatalism to self-determination, we need to believe in our country and own its future. It is time to start framing the conversation with a forward-looking, aspirational eye that places preparedness and Haitian voices at the center of the dialogue.

One response to “The Power of Insurance and Haiti’s Future”