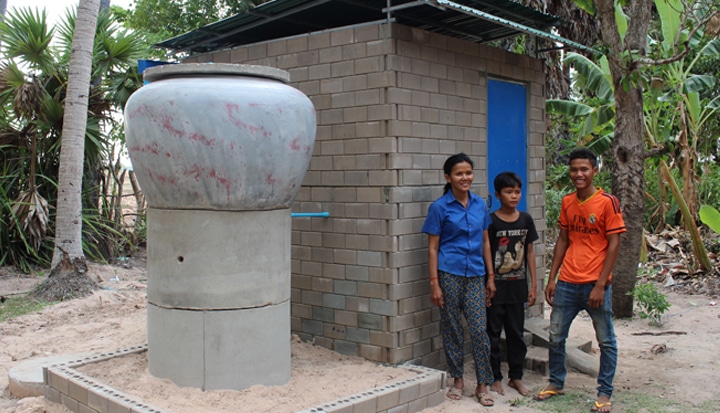 Who will step up to address the very real liquidity gap that stands between poor households and their first toilet in Cambodia? iDE believes that local, friendly latrine businesses are best placed to provide non-interest bearing payment facilitation to households in their community. Read how iDE is seeking to unlock this sanitation supply-led financing at a larger scale.


Cambodia has made remarkable progress in developing its sanitation. The proportion of households having access to toilets leaped from 23% to 68% in the last 10 years. Since 2011, iDE has been involved, training hundreds of entrepreneurs to manufacture and deliver attractive low-cost toilets for their community. Combined with our sanitation marketing demand-creation efforts, these grass-root businesses have facilitated the installation of 300,000 low-cost latrines, reaching 1.5 million people (nearly 10% of the total population).

However, more difficult challenges lie still ahead. The Cambodia Government's National Action Plan set the goal of an "Open Defecation Free" Cambodia by 2025. The remaining third of the population that does not yet own a toilet lives in mostly rural areas and comprises some of the poorest households. To achieve this goal, further lowering toilet prices with targeted subsidies will be necessary, yet not sufficient: subsidies help make toilets more affordable but still fail to address if a household has sufficient funds for a cash purchase. This liquidity gap is what often stands between poor households and their first latrine. A basic pour-flush toilet with a shelter will cost about $200. Even with a partial subsidy, it is difficult for a poor household to commit to a single lump cash payment "on delivery." A loan is not an option, either, as our view is that institutional micro-financing is inadequate for household-level sanitation financing.

Cambodia has developed one of the largest microcredit sectors in the world, growing from 300,000 clients officially served in 2005 to nearly 1.6 million in 2013. Today, Cambodia receives just short of 10% of all microfinance investments in the world, which is only exceeded by India with its nearly 100 times larger population. Easy access to finance, however, has significantly increased the indebtedness of Cambodia’s households, who currently hold $2.9 billion in outstanding credit at the end of April 2018. The average borrower indebtedness is now about equal to the country’s per capita Gross National Income—a red flag indicating endemic over-indebtedness. 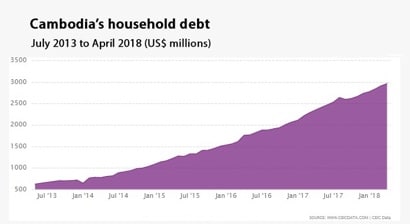 Micro-finance institutions have become cautious about financing small, non-productive assets such as toilets. Similarly, a study conducted by iDE in a pilot combining subsidy and micro-financing revealed that the poorest, cash-strapped and over-indebted households are wary about taking on a loan to buy their first toilet. With so much mutual risk aversion between micro-finance and poor households, would it be wise, or ethical, for the sanitation development sector to keep trying to marry them? Who will step up to address the very real liquidity gap that stands between poor households and their first toilet?

iDE believes that local, friendly latrine businesses are best placed to provide non-interest bearing payment facilitation (i.e., instalment plans) to households in their community. In fact, some of these businesses have been offering payment facilitation for years. To unlock this endogenous sanitation supply-led financing at a larger scale, iDE is seeking to address three obstacles that these businesses are facing: lack of skills, poverty risk aversion, and limited cash-on-hand.

Each business owner decides how many instalment plans to offer, depending on their available capital and the level of risk they are willing to accept. Based on a three-month pilot, this approach seems promising: 80 instalment plans were offered, 77 were fully paid off, two remain outstanding, and only one was written off as a default.