Three Promises Lidl Has Made to Protect its Food Workers 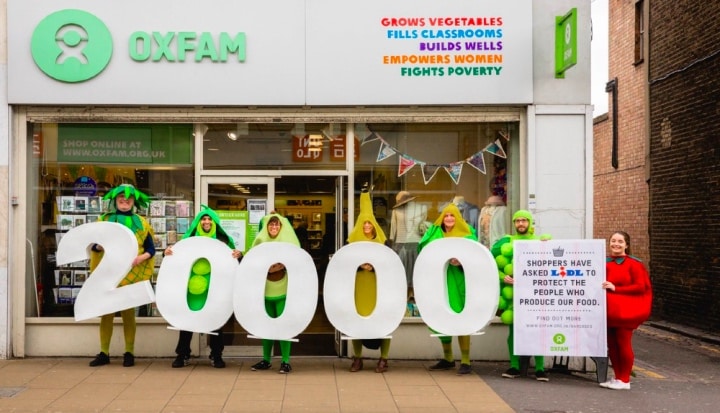 Supermarkets have become one of the few vital services still functioning during the global Coronavirus pandemic. Supermarket staff deserve great respect for keeping customers safe and supplied with food to sustain us through this unprecedented crisis.


But there is another group of frontline food workers doing the same, hidden from view, those who produce the products we are all trying to buy, such as tea, coffee, prawns, fruit and vegetables. Even before Coronavirus, Oxfam research highlighted workers’ vulnerability, earning low wages on insecure contracts, often with poor sick pay and hygiene arrangements. In 2018, we launched the Behind the Barcodes campaign to get major supermarkets to take responsibility for ending human suffering in their food supply chains. The issues raised by the campaign have become starker in the context of the current global pandemic.

One of the major supermarket players is Lidl. With 10,000 stores in 32 countries in Europe and North America, Lidl has significant power to tackle the human suffering behind our food.

Unfortunately, Lidl scored poorly on Oxfam’s Supermarket Scorecard, which  assesses 16 powerful supermarkets on four themes: Transparency, Workers, Farmer and Women, generating national rankings for the UK, Germany, Netherlands and the US. Lidl was bottom of the UK scorecard and close to the bottom of the German and Dutch scorecards. A series of public actions followed as part of Oxfam’s Behind the Barcodes campaign. 20,000 people in the UK and 18,000 in the Netherlands signed a petition (now closed) asking Lidl to do more to protect the people behind its food. Explaining why they signed the petition, Simon and Donna in Sheffield told Oxfam, “We shop at Lidl and would like to do so with a clear conscience.”

Oxfam, therefore, welcomes the new human rights policy Lidl has published, to protect the wellbeing of workers in its supply chain. This represents an important step in the right direction, especially concerning one of the four pillars on the Behind the Barcodes scorecard: workers’ rights.

We want to thank all the supporters who have played a role in influencing Lidl to make these positive changes. Across the world, we are seeing a wave of community spirit and solidarity, with regular cheers for health workers who are on the frontline of Coronavirus. We hope this empathy for those who are vulnerable but working hard to supply our food, is a legacy of the current crisis. Thanks in large part to people’s campaigning and communication efforts, here are three commitments that Lidl has made.

Lidl now acknowledges that abuses often occur when governments fail to protect workers and trade unions are absent or weak. The organisation has strengthened its governance process for human rights and, by upholding the Dhaka principles, tackle workers’ recruitment fees, a red flag for modern slavery. More broadly, Lidl has committed to uphold the UN’s framework for business and human rights.

It has identified priority sectors for company action following a human rights mapping process and will undertake three studies a year to assess the impact of its business on the rights of people, starting with Kenyan tea, Spanish berries and Latin American bananas. In the process, it will consult NGOs and trade unions and by 2021 it will publish findings and action plans. It acknowledges the barriers to workers claiming their rights and promises to engage proactively with trade unions and to strengthen grievance mechanisms.

For the first time, Lidl publicly acknowledges that in lower-income countries especially, the minimum wage can fall far short of workers’ basic needs. In 2020 it joined a German government initiative to work towards a living wage for workers and a living income for small-scale farmers. It will also increase participation in other initiatives that seek to ensure respect for workers’ rights.

2. Lidl has promised to ensure fair and equal treatment for women

Lidl has recently signed the United Nation’s Women’s Empowerment Principles. This is a first step towards ensuring gender equality for supply chain workers. This is important because the jobs women do are typically lower paid with poorer job security, and women provide far more unpaid care work. Many of us juggling work and care in the current context can appreciate how challenging this can be.

Lidl has also promised that by 2021 it will publish a gender policy which covers both its operations (own employees) and its supply chains.

3. Lidl has promised to be more transparent

Lidl has  published the names and addresses of its direct food suppliers. The supermarkets on Oxfam’s scorecard have generally been resistant to this (with certain exceptions such as Albert Heijn, Jumbo and now Morrisons) and we welcome the fact that Lidl is showing leadership on supply chain transparency.

This is important so that consumers can find out about the food they buy and people producing the food can find out who buys it, giving them a channel to flag any serious issues. More than 85% of Lidl’s products are ‘own-brand’ so it has an extra responsibility for their provenance.

Throughout this process, Oxfam has had many meetings with Lidl in Germany (the location of Lidl’s headquarters), in the Netherlands and the UK. We made clear we were looking for meaningful, public, company-wide commitments, whilst sharing advice and examples of good practice. The commitments made are aligned with our recommendations on workers’ rights.  While the new human rights policy principles have been published at group level, the complete version including all commitments is currently only available at the German, British and Dutch websites. Lidl has promised to roll this out everywhere and Oxfam will monitor this.

The steps just announced go far but will not be enough on their own to change the lives of workers and small-scale farmers in lower-income countries. We would like to see Lidl evolve their business model to deliver more benefits to workers and farmers, engage with governments on action to protect human rights, and achieve greater gender equality over time.

We have appreciated the constructive engagement with Lidl throughout, which we hope will continue. It remains to be seen how the company scores on the 2020 scorecard, compared with companies scoring much higher last time such as Tesco, Sainsbury’s and Asda-Walmart. We will continue to monitor the progress of all 16 supermarkets covered by the Behind the Barcodes campaign and encourage them to maintain a focus on people’s hidden suffering in their supply chains and beyond. It is in all our interests that our food system emerges from this crisis fairer and more resilient.

This article was previously published on Oxfam Views & Voices