This COP26 it’s time to listen to farmers and workers 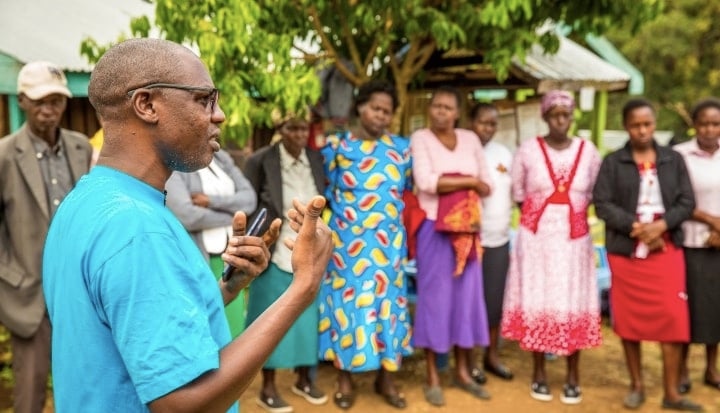 The eyes of the business world have been trained on Glasgow for COP26. The environment is increasingly topping the agenda for boardrooms at the biggest companies. At the UN’s recent biodiversity conference in China the chief executives of Unilever and H&M were among those calling on governments to take significant action to reverse the collapse of our ecosystems.


This COP26 it’s time to listen to farmers and workers, value their expertise and work with them to rebuild better. Co-op and Fairtrade Africa are reimagining the future of programmes.

The eyes of the business world are trained on Glasgow for COP26 this week. The environment is increasingly topping the agenda for boardrooms at the biggest companies. At the UN’s recent biodiversity conference in China the chief executives of Unilever and H&M were among those calling on governments to take significant action to reverse the collapse of our ecosystems. (Halt destruction of nature or risk ‘dead planet’, leading businesses warn | Biodiversity | The Guardian)

This is a crucial moment for our planet and an unmissable opportunity to listen to the custodians of our lands: the world’s farmers and workers. A delegation of representatives from Fairtrade’s global producer networks are attending the summit to lay bare the realities of the climate crisis and voice their concerns to global leaders and businesses, on behalf of 1.8million farmers and workers. They are demanding that world leaders live up to their climate pledges, meet the agreed $100 billion per year in climate finance for low-income nations and ensure that more money goes directly to those who need it. (COP26: Be fair with your climate promise - Fairtrade Foundation)

Businesses committing to Fairtrade sourcing ensure producers are farming in the most environmentally sustainable way possible. But the costs on the ground are rising, and farmers and workers critically need greater investment to address climate change, particularly in commodities where incomes are known to be insufficient in meeting people’s daily needs. That’s why we at Fairtrade are excited to launch an ambitious and large-scale new programme, thanks to funding from Co-op; a long-term partner of Fairtrade, one of the world’s largest consumer co-operatives and one of the biggest food retailers and wholesalers in the UK.

The ‘Fairtrade Alliance for Climate-Smart Supply chains in Africa’ (FACSCA) will see Co-op partner with Fairtrade Africa to deliver the NGO’s Climate Change Strategy and to address point 7 (support producers to adapt to climate change realities and to become more climate resilient of the retailer’s 10-point action plan. Climate | Sustainability - Co-op (coop.co.uk) It will support producers to maintain resilience in the face of climate change and protect their local environment. The Fairtrade movement is calling this the ‘future of programmes.’

In Co-op’s Climate Justice for People & Planet report, the retailer calls for bold leadership by governments and businesses to step up and support a just transition – ensuring they invest in climate resilience in their global supply chains and don’t leave the burden of transitioning to a more sustainable economy with the farmers and workers. With an investment of almost £400K in FACSA, Co-op are playing their part, investing in climate resilience and a just transition within at-risk supply chains in sub-Saharan Africa. By placing decision making with Fairtrade Africa, who work in close consultation with producers, this programme ensures producer voice and ownership for climate strategy is at the heart of programme design. We believe the gold standard of private-NGO partnerships is a collaborative model, driven by shared values that address power imbalances and ensure farmers’ and workers’ voices are central in programme design and delivery.

Over the course of two years, FACSCA will work with twelve Fairtrade producer organizations across Ethiopia, Kenya and Rwanda, targeting 16,000 farmers and workers and benefitting an additional 65,000 people indirectly. Communities will also be supported in practical ways, for example helping to reduce the amount of fuel used in their households by changing energy sources, such as investing in bio-gas cookers which are lower emitters.

The programme will also see farmers and workers supported to establish additional revenue and reduce their dependency on core products which are currently highly vulnerable to climate change. Diversifying crops so farmers can sell vegetables on the side for instance, generates income straight away, as it can take three and a half years for coffee bushes to mature. Mr. Nelson Ngeno, station manager at FINTEA Outgrowers Cooperative Union, Kericho, Kenya said he is optimistic that diversifying into new income streams will give farmers ‘financial freedom’.

Fairtrade Africa has targeted communities most severely affected by climate change and will be aiming to improve the livelihoods of vulnerable groups. It is identifying those who have demonstrated some progress in climate mitigation efforts already and have environmental projects in need of financing. Some of these will even go on to have Climate Change ‘centres of excellence’, which will be held up as examples to other producers from their local regions, meaning the programme will have an even greater impact.

Aside from the many real challenges farmers are currently experiencing, the threat of a warming planet to agriculture and the increasingly frequency of storms, floods and catastrophic events mean future generations’ livelihoods look increasingly uncertain. Therefore, following Fairtrade’s model of empowering communities and listening to those with the relevant expertise, FACSCA will work closely with young people and appoint 12 youth climate ambassadors, to be a point-person that locals can go to for advice.

This type of programming enables businesses to have a positive impact, strengthen their own supply chains, whilst farmers gain backing for projects that make a real difference. Can businesses make a difference? Absolutely – but they should take a just transition approach and work in true partnership with farming experts. We hope world leaders will follow their lead.