The Tide is Coming in for Indonesia's Seaweed 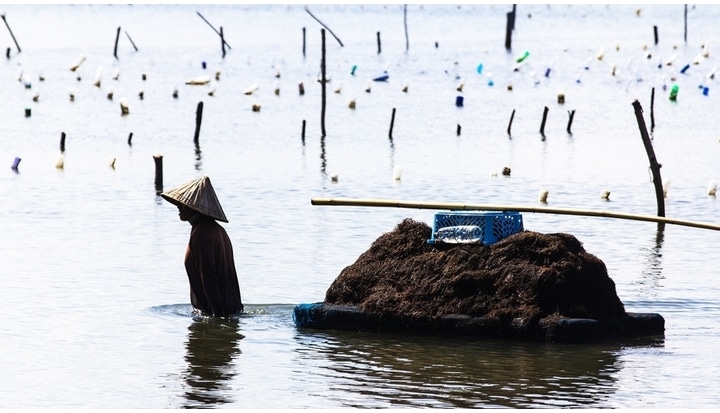 Do you know much about seaweed farming? No? Well, neither did we until our interest was piqued by a story in The Jakarta Post about a development project in Indonesia.


Along the coast of the province of South Sulawesi, villagers began farming seaweed to supplement their income from fishing several decades ago. As global demand for seaweed and seaweed products has taken off, prices have increased and many villagers have taken up seaweed farming full-time.

Mangambe Daeng Siama, a seaweed farmer from the village of Ujung Bali in the Takalar region of South Sulawesi, told The Jakarta Post that for around 10 years now he has concentrated on growing the Gracilaria species of seaweed.

“Gracilaria is easier and more economical to grow,” he said, adding that Gracilaria plants can be harvested eight times a year over four years.

In 2014, the United Nations Industrial Development Organization (UNIDO) launched a programme to strengthen the three main value chains in Indonesia’s fisheries sector: seaweed, tuna and pangasius. As part of this programme, UNIDO has been teaching farmer groups and cooperatives in coastal regions of Sulawesi how to grow seaweed in accordance with global standards. Some 550 farmers in South Sulawesi have received training on more effective cropping practices.

As a result, both productivity and quality have improved. Siama told journalists that his production has increased from 500 kilograms to 3.5 tons per harvest.

Anita Nirody, UN Resident Coordinator in Indonesia, who recently visited one of the pilot projects in the Takalar region, told the local Liputan 6 television station, “This project is supporting one of Indonesia’s most important products. We have seen several successes, for example, seaweed production by farmers here has gone up by 55% and profits for the farmers up by something like 29%.” She added that Takalar now has the potential to develop into a seaweed production hub.

One of the main buyers of Gracilaria seaweed is the Agarindo Bogatama company, with headquarters on the Indonesian island of Java.

Agarindo Bogatama is the world's largest manufacturer of agar, a jelly-like substance formed when Gracilaria seaweed is boiled. It exports 30% of its agar to Japan and the United States of America, with the rest sold on the domestic market.

Agar is used as an ingredient in desserts throughout Asia, and also as a solid substrate to contain culture media for microbiological work. Agar can also be used as a laxative, an appetite suppressant, a thickener for soups, in fruit preserves, ice cream, and as a clarifying agent in brewing.

Agar is also a vegetarian substitute for gelatin, the flavourless food ingredient that is derived from collagen obtained from various animal body parts. The consumption of gelatin is forbidden by some religious rules or cultural taboos, or is declined by vegans and vegetarians. At the end of the twentieth century, it was claimed that gelatin had the potential to transmit bovine spongiform encephalopathy (BSE), sometimes referred to as “mad cow disease, to humans.

Agarindo Bogatama has been working with the Kospermindo cooperative to promote and improve seaweed farming since 2009. Together, they introduced the long-line cultivation method where small pieces of seaweed are tied to long ropes which are attached to floats. The seaweed grows over several weeks and is then harvested. Since 2015, the UNIDO project has built on the groundwork carried out by Agarindo Bogatama and Kospermindo to help farmer groups increase productivity and improve quality.

As well as improving the yield and quality of seaweed sold as raw material for industrial processing, the UNIDO project is empowering female seaweed farmers by helping them create alternative sources of income. Around 150 women seaweed farmers have been trained in the processing, packaging and marketing of 17 seaweed-based foods such as seaweed noodles, juice, syrup and biscuits.

The UN’s Nirody told CNN Indonesia, “We are seeing that women are getting increasingly engaged. I really see this project as one that is investing in human capital. It is building up the skills and knowledge of the farmers and there is a special emphasis on women.”

The UNIDO programme, run in conjunction with the Ministry of Marine Affairs and Fisheries, is financed by Switzerland’s State Secretariat for Economic Affairs (SECO). It contributes to two important objectives in SECO’s Country Strategy 2017–2020 for Indonesia: support for a more competitive and job-creating private sector with access to sustainable resources and markets; and gender equality as an important element of poverty reduction, social inclusion and economic development.

This article was previously published on the United Nations Industrial Organisation (UNIDO) and is reproduced with permission.