Click here for more stories about
Environment
Thursday May 16 2013


In my last article, you heard about SunWater, a project to build a radically affordable solar water pump for $2-a-day farmers that will transform small plot agriculture, create new water markets, and significantly increase incomes that will raise bottom-of-the-pyramid families out of poverty. Our target customers are small-plot farmers in India and Africa.

These farmers need a reliable, low-cost water pumping system so that they can grow cash crops to increase their incomes. They also need electric power to add value to their crops (grinding, processing, etc.) and for household use. Current pumping systems cost too much or are unreliable.

Solar pumping systems have been available for years, and they show great promise. But they haven’t been adopted at scale for a very simple reason. They cost too much!

The purchase price of solar PV systems is much too high to be competitive with diesel pumps, even though the fuel and repair costs of diesel pumps are astronomical.

If we could cut the cost of solar pumping systems by 80%, we could transform small farmer incomes, create tens of thousands of new jobs, and significantly lower carbon emissions.

How It Can Be Done

So, how can we radically reduce the purchase price of solar PV powered pumping systems along with technologies that efficiently transport irrigation water from the source to the plant? Here’s a deep dive into the different parts of SunWater!

The good news is that affordable small farm systems are already available through the work of IDE.

Through the work of IDE, the market price of drip irrigation has been drastically reduced by using comparatively thin walled lay-flat hose to convey irrigation water from sources like tube-wells to rows of plants. The cost of drip irrigation systems were reduced by designing affordable filters to remove dirt from the water, reducing system pressure to reduce the wall thickness of supply and lateral tubing bringing water to each plant, and simplifying the design of the emitters, or drip points, along each lateral. This reduced the cost of drip irrigation systems from about $1,200, or more to less than $600 per acre.

So what about the greater challenge of cutting the cost of a solar PV system and a pump motor combination from $7,000 to $2,500?

Here’s how I think it can be done:

In my new book with Mal Warwick, The Business Solution to Poverty: Designing Products and Services for 3 Billion New Customers we provide a detailed description of zero based design. Like zero based budgeting, it starts from scratch, making no assumptions about the technology and strategy that can best be used or created to address a specific problem. In this case, we’ve defined the problem as cutting the cost of an installed 2-kilowatt solar PV powered pumping system to $2,500. We have broken this down further to set a price target for the installed solar PV system of 70 cents a watt ($1,400 for a 2-kilowatt system), and the price of controller, pump and motor at less than $1,100, for a total retail price of $2,500. If we can achieve these targets, we believe solar PV powered pumping systems would be economically competitive with diesel-powered pumps, which would create transformative new energy markets in developing countries.

To pull it off, we’ll need to work on solar pumping, irrigation, and livelihood enhancing high-value crop production and marketing as a total system, with each system component influencing the design of each other component, and of the total system. Below is a diagram of what this system looks like. Integrated financing also needs to be part of the system solution.

In spite of the fact that the price of photovoltaic (PV) solar systems have dropped significantly over the past ten years, the capital cost of an installed PV system used to pump irrigation water is still far too expensive to be competitive with diesel powered pump sets. But there are many options for further lowering the capital cost.

For example, a simple glass mirror is much cheaper than a solar panel. If we reflect the sunlight hitting ten glass mirrors that are a little bit bigger than the surface area of a 250 or 300 watt solar panel, we should be able to generate 2,000 watts from it. Since we’re pumping water, we can pump a small amount of water through a simple heat exchanger on the back of the PV panel to keep it from overheating. The mirror system would need to be incorporated into a simple frame that could be rotated to track the sun. This is just one out of the out-of-the-box solution that could lower the cost. A simple initial prototype we built in collaboration with Ball Aerospace engineers worked pretty well.

Most diesel powered pumps convey water from the pump to the crop in unlined channels, and deliver it to plants by flooding the field, with the end result that 60 to 70 percent of the water pumped out of the ground is lost to seepage before it ever gets to the plants that need it. Using thin-walled lay-flat tubing to carry the water from the pump to the field, and low-cost drip irrigation to deliver water to the plants would double the overall efficiency of traditional water conveyance and application methods. This would either double the water available for irrigation or cut the size of the pumping system in half, either of which have the same functional impact as cutting the cost of the solar powered pumping system in half.

Fifteen years ago, I and my colleagues at IDE started designing and field testing a low-cost drip system for small farms that is about one half the price of conventional drip systems. Such a low-cost drip system costs about $1,400 for 2.5-acres, including the lay flat hose to carry water from the pump to the field, and IDE field tests in a variety of countries have demonstrated that typical farmers can earn net income after expenses of 45 cents/square meter, or $4,500 from a 2.5-acre plot of diversified high-value cash crops like off-season vegetables by putting the low-cost drip system to work.

You can’t pay for a low-cost drip system and a solar PV powered pumping system, and make a profit by using the water these systems produce to grow low value crops like rice, wheat, corn, and pulses. To earn a reasonable livelihood, small farmers need to learn to irrigate in the dry season when vegetable prices are two or three times as high as they are during rainy season when everybody can grow vegetables. Savvy farmers plant four or five high-value crops, because it’s impossible to predict what the market price for any one crop will be. Also diversified cropping both lowers risk and increases probability that at least one of the crops will generate lucrative profit. So, it’s just as important to help farmers optimize income as it is to lower the cost of pumping and improve the efficiency of conveying and applying water from the source to the crop.

The best way to reach scale is to release market forces, creating opportunities for every participant in the marketplace to earn a reasonable profit. This includes the manufacturers of both the solar PV powered pumping systems and the irrigation systems, the dealers who sell them, the technicians who install them, and the farmers who buy them to improve their livelihoods.

The first barrier to profitability is the capital cost of $3,900 for the total system. Even though it can earn attractive returns on investment, the upfront cost is too high for most small farmers. For this reason, an important player in the system needs to be a business that offers the solar PV powered pumping and irrigation system on a lease basis or on credit, with the lease/credit business also earning an attractive profit.

SunWater is a project run by my company, Paul Polak Enterprises. We are partnering with a group of volunteer engineers from Ball Aerospace, the company that built the instruments on the Hubble space telescope, to build the proof of concept prototype of the $2,500 solar PV powered pumping system. Jack Keller, a world authority on drip and sprinkle irrigation, and Bob Yoder, an irrigation engineer I worked with at IDE, are working on the design of the total system and its beta testing and pilot commercial rollout in Gujarat, India. There we will be working with an Indian subsidiary of Paul Polak Enterprises, and they will play the local leadership role.

From Gujarat, SunWater India will initiate a full scale rollout of the affordable solar PV powered pumping and irrigation system in India’s Eastern states, where the majority of India's existing 19 million diesel pumps are located. My dream is that after we create a new market for solar PV powered pressurized irrigation in India and other countries in Asia, we will repeat the process with a global commercial initiative to provide affordable village electricity to a significant percentage of the billion or more people in the world who lack a connection to the electric grid. 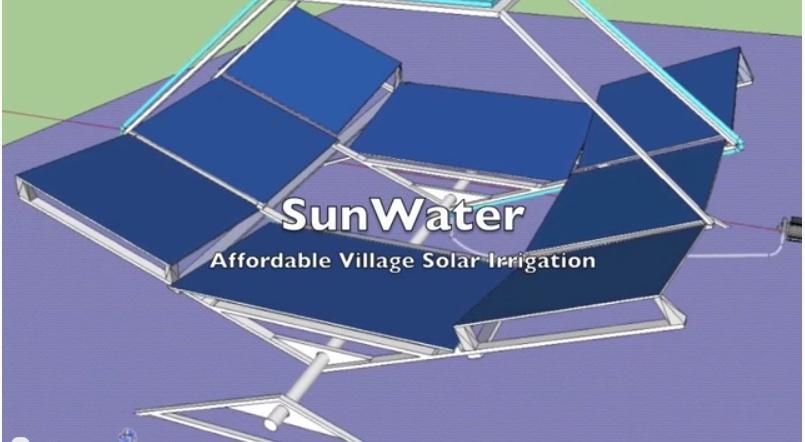 Each dream starts with a first step, and our first step is to raise $50,000 in an Indiegogo campaign to fund the completion of the proof of concept prototype by volunteer engineers at Ball Aerospace. Ball Aerospace is providing their workshop facilities and their technicians are donating their time and talents as a contribution to this initiative. We are asking for help from the public to cover the estimated $50,000 cost of materials needed to develop, build, and bench-test the transformative proof of concept prototype. If you like this idea, I would very much appreciate your help -- you can contribute to the campaign here.