The Road of Change: Circular Economy in the Automotive Industry 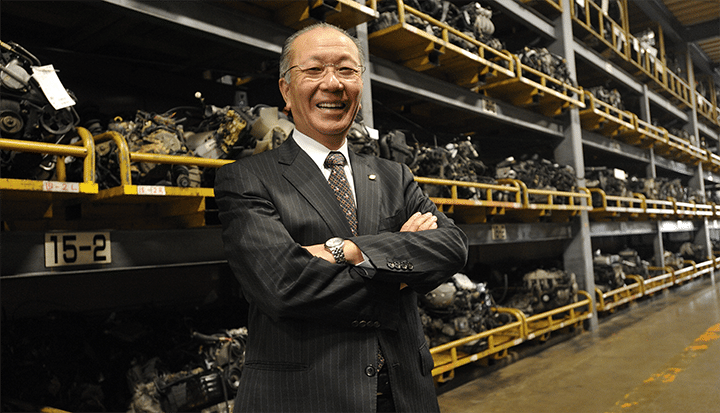 Kaiho Sangyo, a Japanese automobile recycling company, joined Business Call to Action in December 2017 with a pledge to establish an eco-friendly auto recycling value chain in Brazil. As part of this commitment, it will develop the skills of 15,000 recycling engineers and expand 20 existing recycling businesses, including local garages and repair shops.


To tell you the story of Kaiho Sangyo, I must first give you a short introduction to the circumstances in the very beginning. In 1969, before returning to Kanazawa, my beloved hometown in Japan, I worked at a dismantling company in Tokyo for three years. Since the beginning of the 20th century, Japan has been a world leader in the automobile industry and home to many renowned companies, like Toyota, Nissan and Honda. Business has long been booming for companies that deal with automobiles. My father, who owned a miso manufacturing company, expected me to take over his position. To his regret, the entrepreneur seed was already growing in me and, attracted to the boom, I set out to found my own company: Kondo Automobile Company.

My newly-founded company specialised in dismantling automobiles and selling used parts, scrap and aluminum. In all honesty, my priority at this time was not the environment. My one and only focus was financial gain. As the business started to take off though, I realized how negatively the dismantling business was perceived by society. I started to question our objectives and realized that companies do not exist for the founder alone. Companies exist for everyone, for the society as a whole. I removed my family name “Kondo” from the company and renamed it “Kaiho Sangyo”. “KAIHO” has three meanings; the first one is “discover treasure” (we consider end-of-live vehicles as valuables to be recycled for building circular economy, not garbage); the second one is “treasure every encounter” (for it will never recur) and lastly it means “transparent” (as generally in most countries, recycling business is managed in the informal sector). Finally, ”Sangyo” means “Industry”.

Kaiho Sangyo sold used engines and parts as scrap metal primarily to domestic Japanese companies. During the late 1990s, however, we saw enormous growth in foreign buyers from developing countries who visited our company to buy used engines and parts for re-use. Although the sales price for foreign buyers was lower than for Japanese buyers, the foreign buyers were able to buy large quantities and allowed us to establish a presence abroad. This influx of foreign interest piqued my curiosity in opportunities abroad and I began traveling to emerging markets for our business. I quickly identified market inefficiency in these parts of the world, which profoundly impacted the trajectory of my company.

Used cars from developed countries have long provided people in developing countries an affordable means of transportation, in turn providing access to more jobs and opportunities. At the same time, end-of-live vehicles (ELVs) pose a threat to the environment, especially in developing countries where no proper car recycling measures are in place and old cars are often simply dumped in the street. What’s worse, insufficient occupational health standards expose employees in the used-car industry to serious health issues, such as injuries and respiratory problems. When I understood the full story, I recognized that integrating the informal sector with formal businesses could improve waste management while addressing serious health and livelihood issues.

With a new vision in mind, I started to take action through Kaiho Sangyo. Firstly, I widened the focus of my company from simply dismantling and selling scrap steel to also creating awareness on effective recycling among local companies and policy makers, not only in Japan but in developing countries as well. In Japan, I founded the Re-Use Motorization Alliance (RUM Alliance) in 2003. The RUM Alliance is a non-profit organization of Japanese auto recycling companies whose goal is to strengthen and support each other through cooperation rather than competition. The mission evolved into bolstering the circular economy and contributing to a “resource circulation society”, which requires well-functioning waste management and proper recycling systems. To address these needs, we developed a solution with the following three components: installation of recycling equipment, installation of business management systems and provision of training on recycling. With this solution, we train on the use of technologies and convey management skills acquired through our 49 years of business experience to trainees through classroom lectures and practical work at IREC, the International Recycling Education Center. Through our BCtA membership, which we entered last year, we hope to connect with other companies with the same ideals to share ideas and experiences.

Operating within developing countries has been an educational but challenging experience. One of the major obstacles we faced was a lack of ecological consciousness and a deficiency in waste management laws. As a business, we have to cover the cost of ELV collection, transportation and processing to make a reasonable profit. However, inadequate regulations on waste management created a situation in which improper disposal was more profitable than proper recycling. To address this, we began advocating for change on a political level. I believe that unless all businesses are subject to strong environmental regulations, good businesses who do good work for the environment will be outdone by bad businesses who just aim to maximize profit. With that in mind, we urge governments to not only monitor and enforce environmental regulations, but also to implement a support system and market-based incentive mechanism for good businesses to be guided and rewarded.

Driving innovation with and for local economies

To date, Kaiho has provided training courses to over 200 people from a wide range of sectors including private and public actors. Although every training offers a new success story, one that I personally like to share with people who are not familiar with Kaiho is from IREC’s work in Central and South America. One participant at the training, a professor from a local university, concluded that Brazil should introduce a Japanese-style ELV recycling system. He published a book on ELVs and searched for a potential project site for an ELV model plant. Together with the professor and the Japanese International Cooperation Agency (JICA), Kaiho agreed with the Federal Center of Education of Mains Gerais to launch a pilot plant – a Brazilian version of the IREC – at the university. Coincidentally, at that time, the local transportation department was facing the problem of dumped and stolen vehicles. With the help of the newly-founded plant, the transportation department received technical skills training. Consequently, the state government of Minas Gerais enacted legislation on dismantling ELVs with which all traders have to comply. This is one of what we hope will be many examples of how Kaiho Sangyo fosters knowledge and capacity building and drives innovation for local economies, governments and development organizations alike.

This article first appeared on Business Call to Action and is reproduced with permission.